Mercedes’ Nico Rosberg celebrates on the podium next to Kimi Raikkonen of Ferrari and Mercedes teammate Lewis Hamilton after winning the Abu Dhabi Formula One Grand Prix.
Nico Rosberg completed a hat trick of victories to end the Formula One season when he won the Abu Dhabi Grand Prix on Sunday, profiting from a questionable tyre strategy by his Mercedes teammate Lewis Hamilton. 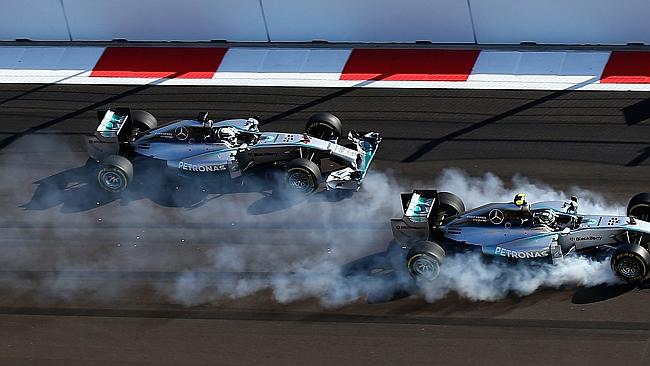 The German won by 8.2 seconds at the Yas Marina circuit to complete Mercedes’ 12th one-two finish of the season, establishing a new F1 record.Ferrari’s Kimi Raikkonen finished third, ahead of his teammate Sebastian Vettel, who drove impressively after starting 15th on the grid.

Felipe Massa of Williams was eighth, Romain Grosjean ninth in his last race for Lotus, and Daniil Kvyat of Red Bull took the last point in 10th.

Rosberg finished the season on a high, with three consecutive wins and six straight pole positions, but it came too late to prevent Hamilton taking the drivers’ championship.

“I am excited about how the end of the season went,” Rosberg said. “Next year can come tomorrow for me, I don’t need any holidays. I’ll try and keep the current form going next year. I am sure the team will give us a great car once again.”

Rosberg started from pole and pushed his lead over Hamilton out to 4.7 seconds before the first set of pit stops. The German suffered from tire graining late in his second stint, with Hamilton cutting the deficit from 7.1 seconds on lap 15 of 55 to 1.3 seconds when Rosberg pitted for the second time at the end of lap 31.

The victory was up for grabs at that point, and it was expected Hamilton would immediately pit and make it a tight race to the finish, but instead the team elected to keep him out on track for another 10 laps.

Having gone that long, Hamilton asked over the radio whether he could try to race to the end on the current tyres and try to hold off Rosberg on fresher rubber, only to be firmly told by the team that “it wouldn’t work.”

He pitted after lap 41 but instead of switching to the softer option tyres for the last 14 laps – Vettel had gone onto the options two laps earlier and raced strongly to the end – Hamilton was fitted with another set of the harder prime tyres and stood no chance of making up the deficit.

There were mixed messages after the race, with Mercedes team principal Toto Wolff saying “we gave Lewis the option to choose which tyre he wanted on the car at the last pit stop” but Hamilton said “it was down to the team whether I went to the option or the prime tires.”

“In hindsight, once Nico had pitted I would have backed off a bit and made those tyres go a lot longer,” Hamilton said. “The tires were still fine at the end. So I honestly felt I could have potentially taken them to the end. Going too long was probably not the right thing to do.

“Some part of me wishes I just gave it a go,” he said.

Wolff said “even though the car was light, it wouldn’t have lasted to the end with options.”