As a proven rally winner, Lappi will lead the team alongside compatriot co-driver Janne Ferm. The Finns last took to the wheel of a Fiesta in 2012 when they stormed to Finnish Championship success with a clean-sweep of victories behind the wheel of the Ford Fiesta S2000. Eight years later, the popular duo are now regularly challenging for top results on the world stage. 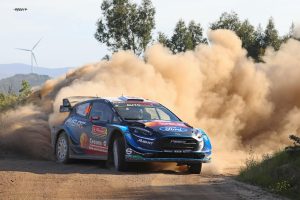 Securing their maiden win on home soil in 2017, Lappi and Ferm have gone on to secure seven FIA World Rally Championship podiums and claimed the runner-up spot on three occasions last year. Competitive on all surfaces, the Finns have speed in abundance and the team are keen to see what they can do when reunited with the Blue Oval.

Teemu Suninen and Jarmo Lehtinen continue their partnership as the young Finn contests his second full season at the sport’s highest level. Developing at pace, Suninen made his world rally car debut in 2017, secured his first podium in 2018, and led his first rally in 2019 – so the team are eager to see what he can do in 2020.

This also marks the first time an all-Finnish line-up has led the team since Mikko Hirvonen was partnered with Marcus Grönholm in 2006 and 2007, and Jari Matti Latvala from 2008 to 2011. Over those six years the Finns delivered two championships, 31 victories, 99 podiums and 592 stage wins; and M-Sport Ford are now looking forward to promoting the next generation of Flying Finns.

Joining the Finns in the third Ford Fiesta WRC on nine events are British talents Gus Greensmith and Elliott Edmondson. The Brits will get their season underway in Monte-Carlo before events in Mexico, Argentina, Portugal, Sardinia, Finland, Turkey, Germany and Wales.

The youngsters made a strong debut when they took to the wheel of the top-specification Fiesta for the first time last year – bettering the time of both Sébastien Loeb and Sébastien Ogier on their very first speed test; and the team are keen to see them continue their development at the highest level this year. Managing Director, Malcolm Wilson OBE, said:

“We’re going back to our roots in more ways than one this year – fielding a young team and welcoming two sets of Finns back to the family. We enjoyed some fantastic results with Marcus, Mikko and Jari-Matti, and now I’m looking forward to seeing how the next generation of Flying Finns develop.

“But our core philosophy has always been the promotion and progression of young talent, and in Esapekka, Teemu and Gus we have three talented youngsters who are all capable of delivering some strong results.

“The team may be a young one, but they have the experience and ambition to go far – and I’m keen to see what they can achieve in 2020.”

“There’s a lot of potential in our 2020 line-up and our aim is to continue challenging for the top results. A rally win is the ultimate goal, and I think we have every chance of achieving that. Everyone is determined to deliver, and we can’t wait to get stuck in.

“Esapekka is a proven winner and there is no doubting his speed. He finished second three times last year so I’m looking forward seeing how he gets to grips with the Fiesta. And if it’s anything like the last time he got behind the wheel of a Ford then we’re in for one hell of a season!

“I think a lot of people will be keen to see what Teemu can do too. He and Jarmo work really well together and I wouldn’t be surprised if we saw them challenging for the top results on quite a few events this year.

“It’s also great to see Gus back with nine events in the Fiesta WRC. He had a really strong debut last year and he’s only going to get stronger and more confident as the season progresses. This is very much a learning year for him, but if I know Gus he’ll want to make his mark too!” Esapekka Lappi said:

“I’m really looking forward to this new adventure and I’m excited to see what we can achieve. M‑Sport Ford has a real passion for rally and there were a lot of talented drivers available for this seat, so I’m very happy they put their trust in us – giving myself and Janne an opportunity to show what we can do in 2020.

“We start testing this week, and I’m really looking forward to discovering the Fiesta. The last time I drove a Ford we had a lot of success and it would be great to see that continue this year. I can’t wait to get started, and hope we can push for some strong results.”

“I’m really grateful to Malcolm and the team for their belief in me. I feel as though I learnt a lot over the past 12 months, and I’m looking forward to seeing what Jarmo and I can do in 2020. Last year taught me that I need to give everything in all of the rallies if I want to reach the top results – and that’s what I hope to do this year.

“It’s also really great to be in a team with Esapekka because he was something of a hero to me in my childhood. When I started go-karting as a teenager in Finland, he was in the same team and winning the championship. Three years later I was able to do the same, and now we’re both in rally and both back in the same team!”

“I have been waiting for this opportunity my whole life, and now I have it. I’ve progressed through M-Sport Ford’s, ‘Ladder of Opportunity,’ from R1, to R2, to R5 and now WRC. I owe a lot to everyone at M-Sport and Ford who has helped me progress as a driver, but there is still a lot more to come.

“The team may be young, but we’re all ultra-competitive and together I’m sure we can deliver some strong performances. During the off season I have made some big improvements to myself outside of the rally car. I have never been fitter, and I have never been faster, and when the light turns green for the first stage of 2020 I will be ready.”