The racing at MIS has always been a double-edged sword, drivers love it and a lot of fans seem to hate it. The wide track gives lots of room to pass and multiple grooves to race in, but it also lets the field get stretched out very fast and cuts down on the passing. NASCAR took a shot with a new aero package for the cup side this week to cut down even more downforce to try and help the racing at the home of the big three automakers. 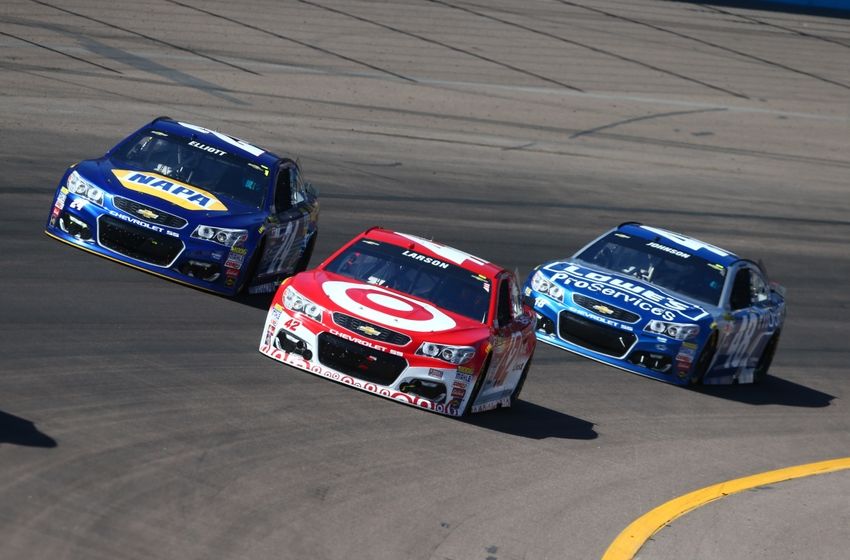 The changes really put the cars back in the drivers hands with massive corner entry speeds, topping 215 mph, but with the reduced downforce having to get way out of the throttle and drive the cars out. There were a lot of issues on restarts and when they did get longer green flag runs cars strung out fairly quickly again. The driver reaction was mostly positive, this package did not get the rave reviews the last major aero change received.

This weeks nominees for our good are both good signs for NASCAR’s future. First, Daniel Suarez winning the Xfinity race on Saturday brought national attention to NASCAR for the first Mexican born driver winning in any of the top three series. What makes it even more impressive, Suarez is leading the points standings justifying his win as more than just a fluke. It was not a mileage win or someone falling off, he passed Kyle Busch to take the checkers and lock in a place in the inaugural Xfinity chase.

As good as a first win is, it was not able to knock off our choice for our good…… The future of NASCAR is stepping up and making a statement that they are going to contend every week. The top three of Logano, Elliot and Larson are spending a lot of time at the front of the pack.   NASCAR needs fresh faces to try and get attention to the sport and hopefully bring in new fans. It’s not one type of track these drivers are challenging for wins on either, they are a threat everywhere they go. Logano and Larson has been around for a few years now, but Elliot in his rookie season is starting to get mentions with best rookie seasons of all time.

One of the fan complaints about NASCAR races is it seems to be the same drivers all the time. Well

that is changing, and by the end of 2016 I would not be surprised to see several of these young drivers challenging for the championship. The future of the sport has talent, NASCAR just needs to find a way to get the fan base excited again to enjoy the youthful revolution.

We had several things to choose from for our bad this week. To start with, the fire a the Thor Sport racing shop is a tough break for one of the best teams in the Camping World Truck series. They were able to save several trucks and transporters, but it is going to hurt the series points leading team of Matt Crafton.

I also thought about the rash of restarts that led to yellow flags as our bad this week. We all like exciting racing and we know crashes are a part of it, but it gets hard to watch though when every time there was a restart someone else loses it within a couple laps for no reason at all. I like that NASCAR is trying to make the racing better, but they need some more testing for the teams and drivers to make the quality of racing better. Kyle Larson came into this week without his crew chief after getting caught with a lug nut violation last week. Part of the storyline from last week was Kurt Busch winning after his crew chief was suspended for a lug nut violation of his own and if Larson’s team could do the same. Larson was able to come in third, but then his car failed the post race laser template inspection and that is going to lead to some bigger problems for the 42 crew.

Kyle Larson has had several impressive runs in recent weeks, but if his team keeps getting popped

for post race violations his efforts will be tainted. Everyone in the sport has been waiting for Larson to take the next step from talented driver to a contender every week, this is not going to help. With his crew chief already on probation, the penalties could be significant and that is bad news.

We also had several headlines to choose from for our ugly this week. Ryan Truex having to step out of his truck series ride for sponsorship reasons while sixth in the points is a bad sign for the sport. We have had a couple of these now with the 43 Xfinity teams shutting down and no sponsor for the truck series race at Iowa this weekend starting to bring up questions about the health of NASCAR outside the cup series.

Kyle Busch and Dale Earnhardt Jr could also have ended up as our ugly this week. Finishing 39th and 40th in Michigan represents the struggles of these drivers for a month now. It is not something that you expect to see from two teams that bounce back very well. Kyle is locked onto the chase where Dale Jr is not and falling in the points standings. Until he gets a win, that 88 bunch has to be moved to bubble watch with ten teams having wins this season leaving only six spots left in the chase.

What the IndyCar series did to their fans at Texas this weekend is how you absolutely ruin the future of any event at TMS again. The rain delays for weepers on the track, six hours after the rain has stopped is hard for fans to handle. Then to run part of the race the next day and have to call it for rain only to reschedule it for months away is a punch to the gut of your fans. The decision making process here will be long be debated.

The attendance on Saturday for the Firestone 600 was weak at best, and the future of IndyCar racing at speedways like TMS is being questioned. After the accident where Joseph Newgarden was injured in a violet crash at high speeds on top of everything else, I could see this being the end of IndyCar racing at Texas.

Next weekend is a well earned week off for the Sprint Cup teams for Fathers Day. The Xfinity and Camping World Truck Series make a trip out to Iowa for what is always and exciting weekend of racing. A track that many have lobbied for a Sprint Cup date but sadly seems more destined to lose the dates it has with the lower series.

The Sprint Cup teams return to the track in two weeks at the road course in Sonoma. Always a fan favorite that brings big crowds, the trip too the wine country in California is a fun return from the break. Remember to take care of your dads this Sunday and we will see you next week with our good, bad and ugly from Iowa.