We could argue all day long about what the fastest street car is. But at 1360 horsepower and an equal amount of kilograms (2998 lbs.), the Koenigsegg One:1 remains hard to beat on tarmac. So it’s no wonder that factory test driver Robert Serwanski averaged 77mph without me in the passenger seat up the tight Goodwood hill using a sold customer car and just around 80 percent throttle. The torque at boost simply pushes that car into the next century.

It’s a similar story with the Ford Focus RS RX. Like all of the FIA’s top-level rallycross machines, it’s capable of getting to 60mph in 1.9 seconds. That’s half a second quicker than a LaFerrari, the current king in road-legal acceleration. The Focus RX doesn’t have a license plate, but there’s no reason why it wouldn’t work just as well as a grocery getter as any World Rally Championship car. WRC cars are required to be road legal, and this Focus RX has all the hallmarks of a great rally car. After all, it’s just a Focus with all-wheel drive, a turbo-four, the seats pushed further back and no cargo space whatsoever.

On second thought, maybe it wouldn’t be great at getting groceries.This was Ford’s debut year in the FIA World Rallycross Championship, and there’s no question that by 2018, they intend to score an overall win. To get there, they have 49-year-old tire slayer and online superstar Ken Block and 25-year-old Norwegian smiling machine Andreas Bakkerud, who also happens to be incredibly quick.

Bakkerud is so fast that after claiming three wins and six podiums, he finished the 2016 season in third place with equal points to one time WRC and two time WRX champion Petter Solberg, the man with the meanest Citroën on the planet. Fifth place went to a chap called Sebastian Loeb. 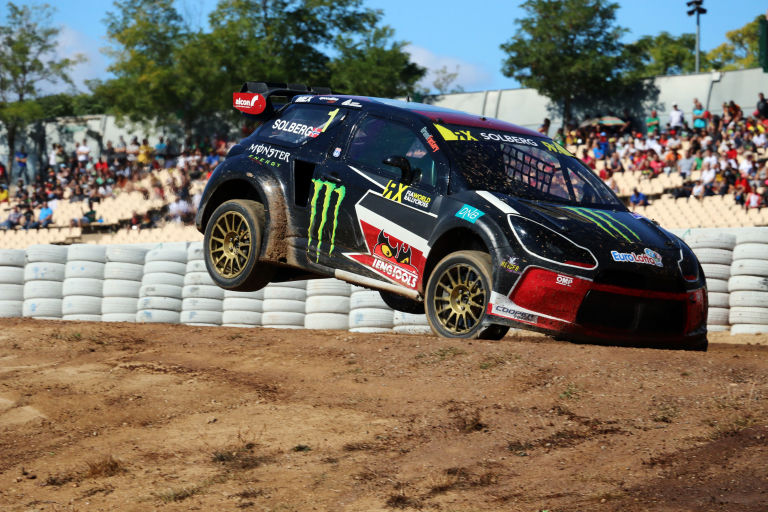 Ford has every reason to be happy. While they might have to share the podium with Audi and Volkswagen, nobody gets as much attention as them thanks to having Block, the boldest livery and friends like pro drifter Vaughn Gittin Jr. with his very smokey Mustang on hand at events. High on Monster Energy, the Hoonigans certainly know how to please the crowd.

As Martin Brundle once famously said, “rallycross rocks.” It’s loud, muddy, very physical, super quick and couldn’t be easier to understand. In other words, it’s the perfect form of motorsport for today’s audience and their short attention spans. Plus, it has a jump. Who doesn’t love a jump?

Ken Block has come a long way since 2009. Back then, his weapon for making James May uncomfortable on Top Gear was a 380 horsepower Subaru. Today, he has a 600-plus horsepower Ford that his team doesn’t even need to retune to shoot a Gymkhana video. Designed by Ford and built by M Sport, the Focus RX is ready for whatever that four-day shoot holds.

It’s an interesting partnership. Block and his Hoonigan Racing Division are obviously stoked to race at the highest level, but they don’t work for Ford. Ken is the boss of the whole operation, and it’s a complex job involving racing all over the world, being active on social media, satisfying the sponsors, and building the brand by shooting videos and taking care of the fans. His wife and kids join the team as often as possible, and the crew is full of motorsport veterans who know their craft. Hoonigan Racing is not a vanity project, but a professional business.

Having fun while performing at the max is the number one priority for Block. Does Ford like that Gymkhana 9 has a new Raptor in it that’s been suspended by a helicopter? You bet they do! Does Ford like that Ken pulls a Vin Diesel by racing a train at the crossing? Well, I’m sure many at Ford do, but the lawyers sure didn’t. Mr. Block ain’t care. The bar needs to get higher every time, and locomotives help.

What Block also must have realized by now is that kids half his age, with more rallycross experience, will produce results. Andreas Bakkerud is the perfect teammate, with an open personality, a loyal fanbase and the pace of a young Norwegian in a rally car. While mechanical issues did slow Block down significantly this year, Andreas’ third place is reassuring for the team and Ford, knowing that the main man had to settle for 14th position.

Mr. Block clearly doesn’t take it kindly when the metal fails him, and following a gearbox-related DNF in Barcelona, he exited the venue so quickly that I didn’t even get the chance to convince him of the benefits of a Gymkhana in Budapest. You know, the hills by the Danube, the cool bridges and the historic squares … it would look spectacular!

That left me with Andreas, a bunch of Spanish journalists and Hoonigan Racing’s development car, a Focus RS built to 2017 spec and packing closer to 650 horsepower. Oh yes.

Did I fly to Spain to spend 48 seconds in a Ford Focus RX, one of the quickest cars on the planet? I did. I’d have done it for 24 seconds in the RX.

There are those first four seconds, revving at the starting line with the antilag keeping the engine on its toes. That 2.0 turbo is popping and banging while every molecule of the car is waiting to be launched. That’s very Group B right there, with 665 ft.-lb. on tap. Then, there’s the rush to 60mph in under two seconds as the car’s four-wheel drive hooks up immediately. You simply can’t imagine how quick and violent it is. But there’s no time to think about it, because the next thing you know, Andreas has just pulled the hydraulic handbrake at full speed.

Now, you’re drifting through a corner, off the tarmac and into the dirt. The clock has counted off 13 seconds now, and there’s around 35 more to go. Extreme deceleration followed by a four-wheel burnout and a rush towards the jump. The Focus RX lands on the other side as if the track was made of marshmallows.

These World Rallycross cars had to be the idea of a bunch of six-year-olds, no question about it. They may be trapped in adult bodies, but they can’t deceive me. I remember being six; this is exactly the sort of thing I dreamed of. Except that in 1993, it would have been an Escort RS Cosworth, gutted and often on its roof.

This is nearly the same dream, brought forth in glorious reality. 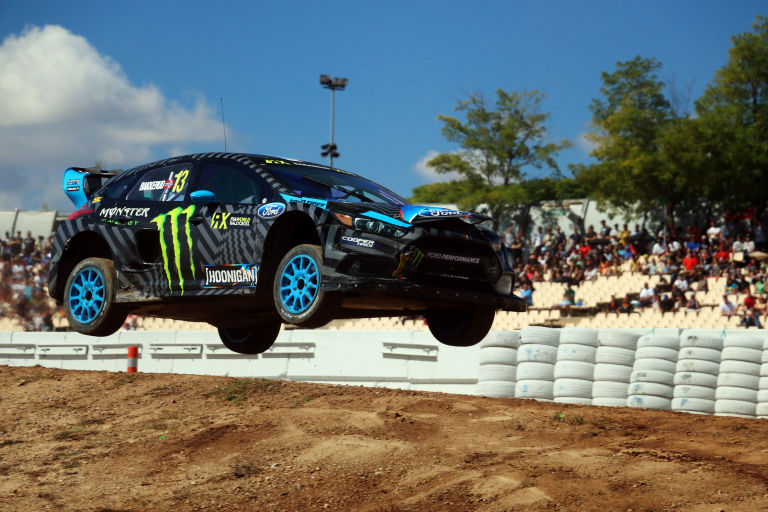 *Okay, there are cars that accelerate faster than a rallycross racer. But this is the quickest car we’ve ridden in that wasn’t sporting slick tires, and that’s what counts.