Pikes Peak International Hill Climb Hall of Famer, Jeff Zwart is headed back to “America’s Mountain” for the 98th running of the “Race to the Clouds.” Zwart, a Porsche aficionado, will showcase the Porsche 935 model when he rockets to the summit in this year’s race, which has been rescheduled for August 30. 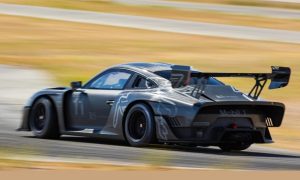 With dual careers as a film director and professional race car driver, Zwart’s unique skill sets are not typically found on the same resume. As a die-hard Porsche enthusiast and a graduate of the Art Center College of Design in California, Zwart established a successful career from his fascination with both art and fast cars. His passions came together while making commercials for top automotive brands like Porsche and Hyundai, which introduced him to Pikes Peak. Capturing cars on film quickly became a full-time job for Zwart, but there was still something nagging at him, and that was the bug to race one of those fast cars on Pikes Peak.

Although a seasoned driver now, he looked up to previous racers early in his career, in particular Rod Millen with whom he is recognized in the Pikes Peak Hill Climb Museum Hall of Fame. With Zwart’s 17th appearance on Pikes Peak next month, he will become the first Hall of Famer to return to competition following his induction.

Zwart’s accomplishments on Pikes Peak are many. He has claimed eight class wins and set three division records. In 2015 he joined the “9-Minute Club” with a sub-10-minute time of 9m46.243s when he captured the Time Attack 1 record. He will take on 10 competitors in the Time Attack 1 division this year.

Driving a Porsche feels like home, according to Zwart, “Having grown up in and around them, the familiarity and comfort of knowing exactly how they handle and drive works well with my driving style and is a huge benefit to racing, especially on Pikes Peak.

Zwart (at right) coaches CJ Wilson before a 2018 practice run

Many racers have a story behind their race number, and Zwart is no exception. In his Pro Rally days, he recalls he had tied for points in the National Championship but lost by one win. The following season, race numbers were assigned based on placings and he was given No. 2 since, technically, he placed second. He opted for No. 11 feeling there were really two No. 1’s the previous season. The number has followed him through his racing career. Interestingly, when asked about his favorite section of the course, 11 Mile claimed the top spot.

Car No. 11 racing through 11 Mile this year will be impressive. This carbon fiber 2019 Porsche 935 will feature the classic Mobil One winged horse as a classic tribute to the long-standing relationship between the Pikes Peak race and Mobil Oil, going back to the 1940s.

Zwart’s success on Pikes Peak isn’t defined only by his impressive racing statistics or his visionary films such as Ken Block’s “Climbkhana,” but includes his willingness to give back to the race he loves. Zwart has dedicated the past four Pikes Peak races to coaching the Porsche Pikes Peak Trophy by Yokohama division for Porsche Motorsports.

“I have really enjoyed sharing with the competitors my approach to racing the Hill Climb,” he said. “Through that experience, I feel like even after 17 years of competing here, I know the road better than ever.”