Lewis Hamilton set the fastest lap in Formula 1 history en route to securing the 94th pole position of his career ahead of the Italian Grand Prix in which Ferrari hit a new low.

Kimi Raikkonen had previously held the record of a one minute 19.119secs around Monza, at average speed 263.578 kmph, but given the power of Mercedes this year, it is now Hamilton in possession of yet another F1 honour. 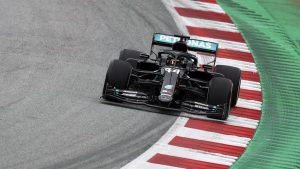 Of course, it was another Mercedes front-row lockout, and behind them there will be no Red Bull as McLaren’s Carlos Sainz will start a stunning third, followed by Sergio Perez in his Racing Point.

Max Verstappen could do no better than fifth, almost a second behind Hamilton, with team-mate Alex Albon down in ninth.

As for Ferrari, the team suffered yet more embarrassment as for the first time since 1984 it failed to get a driver into the top-10 at its home race.

Charles Leclerc will start 13th, while Sebastian Vettel was caught in the chaos that unfolded at the end of Q1 as a gaggle of drivers were involved in what appeared to be more of a race than a qualifying session, which resulted in several tripping over one another.

As he was wheeled back into his garage, Vettel declared over the team radio: “What a mess! Why did the Alfas have to overtake everybody and cause ****?”

Vettel will start 17th, a place behind Romain Grosjean in his Haas and ahead of Alfa’s Antonio Giovinazzi, with Williams duo George Russell and Nicholas Latifi on the back row.

Russel was particularly furious with the stampede on the out lap which culminated in a bottleneck through the first chicane on the hot lap, leading to him shouting over the radio: “Come on guys! We need to be the ones capitalising on these f***-ups, not the ones in the f*** up!”

Around Leclerc, Daniil Kvyat in his Alpha Tauri and Renault’s Esteban Ocon are ahead of him, with Alfa Romeo’s Kimi Raikkonen and Kevin Magnussen in his Haas directly behind.

Much of the talk in the build-up to this weekend had centred on the FIA issuing a technical directive outlawing the so-called ‘party mode’ with regard to engine power, forcing all teams to run the same out across qualifying and the race.

Mercedes motorsport boss Toto Wolff suggested that while his team might be slightly compromised over one lap, the ban would likely assist them throughout the race as the engine will have been under less stress from Saturday through to Sunday.

It made Q1 eye-opening as Hamilton and Bottas set their leading times on the medium-compound tyres, while the rest were all on softs, with the former half a second clear of Sainz who was third quickest in that session.

And come the end, it is clear Mercedes remains in a class of its own.