Last weekend, as Le Mans (France) hosted the season opener of the FIM Endurance and Sidecar World Championships, women in circuit racing experienced an historic moment! For the first time, in conjunction with the 24 Heures Motos of Le Mans, the legendary French circuit welcomed a women-only circuit racing Cup.  With an expected turnout of some 20 to 25, the FFM (French Motorcycling Federation) and the ACO (Automobile Club de l’Ouest) were overjoyed (and overwhelmed!) to see 85 female riders sign in for the race! 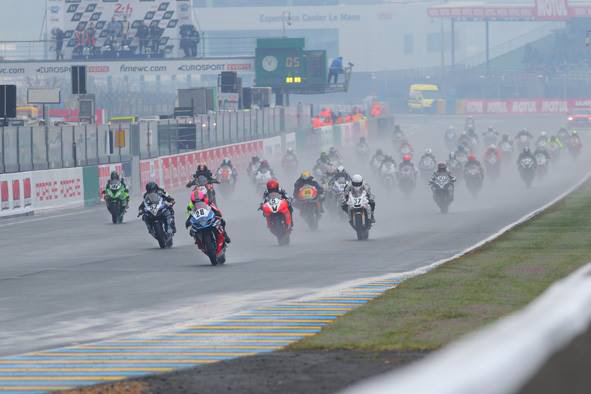 “I am delighted to make history with this record number of women on the Le Mans track!”, said Women´s Cup organiser and FFM Women´s Commission Director Emma Clair.  “Now that the first steps have been taken, we need to continue, and thanks to the FFM Women´s Commission and FIM Women in Motorcycling Commission we will keep on training and encouraging more and more women to take part in competition. Next year, the FFM’s plan is to create a women’s trophy composed of 3 races and to get even more women to join in!”

Nearly all the riders taking part in the Women’s Cup were French but Melissa Paris from the USA also had the chance to take part in this historic race, a chance that she couldn’t miss.  “It was impressive to be on the mythical circuit of Le Mans and take part in this one-of-a kind competition”, Melissa enthused. “It was amazing to see 85 women racing together. It’s something I never thought I would see. I was really excited to be part of it!”

“It has been an historic weekend for women’s motorcycling: it showed the large number of female circuit riders willing to take part in competition and to race on a circuit, regardless of their level and experience. The FIM Women in Motorcycling Commission has absolutely the intention of keeping on developing the presence of women in circuit racing and will plan more and more actions going in this direction”, said FIM Women’s Commission Director Nita Korhonen.

This weekend also saw the a woman triumph in Sidecar, as Kirsi Kainulainen, the only female passenger in the FIM Sidecar World Championship, made it on to the podium, finishing second with Pekka Päivärinta. Last year the Finn made history when she became the first ever female world championship medallist in sidecars. For 2016 the plan is clear: to be the first female Sidecar world champion!