NASCAR’s seven-time Cup champion Jimmie Johnson spent Tuesday at Circuit of The Americas doing a bit of window shopping. Set to retire at the end of a long and successful stock car career at the end of 2020, the Californian took a detour from pre-Daytona 500 activities to visit the Texas road course, continuing to gather intel from friends in a paddock that holds considerable interest for the 44-year-old. 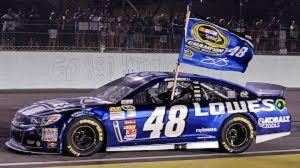 “I’m definitely learning,” Johnson told IndyCar. “This is a totally different world than what I’ve been used to, but it’s a world I dreamed of racing in when I was a kid growing up in San Diego. My heroes were the guys that raced in the Indy 500. I’d go to the Long Beach Grand Prix and watch, hang out, and wanted to be in one of those cars going by.

“For me, this is a learning experience. [IndyCar] has always been a bucket list category for me to come see these cars, be around these cars. [2021] is open for me and who knows what opportunity might come along in IndyCar, sports cars or back to my off-road roots. I’m just taking it all in and see what comes of it.”

Johnson spent time with a number of drivers on Tuesday (including Conor Daly, photo above), and also popped in to see McLaren Racing CEO Zak Brown, who was given one of the Rick Hendrick driver’s NASCAR helmets during their visit. With his career-long ties to Chevy, it wouldn’t be a surprise to see the relationship continue with a Chevy-powered IndyCar team if and when the two-time Daytona 500 winner takes part in his first open-wheel race.

Team Penske’s Will Power is among those who’d welcome Johnson, saying “I think that would be pretty cool to have him” once he’s free to pick and choose where the next chapters of his career are written.
Source: racer.com