The strategy was straight forward for the All Power Audi racing team at the penultimate round of the 2019 Global Touring Cars (GTC) Championship which took place at Killarney International Raceway in Cape Town this past weekend. The team’s main objective was to take back the championship lead that Simon Moss held until the previous round in East London. When the finish flag dropped, a win and a fourth place should have been sufficient to regain control but a protest ruled against All Power Audi’s second race result which placed the team at a slight disadvantage. 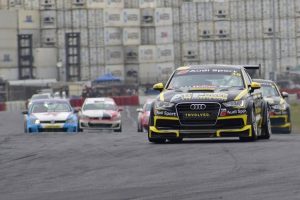 After the round at East London a few weeks ago, the All Power Audi team engineers performed a thorough inspection on the ill-handling of Simon Moss’ race vehicle and discovered that a broken roll bar had been playing its part in its mediocre performance at the past events. Frustrated yet determined to make things right, the team worked around the clock to fix the car in all technical aspects which included the fitment of a new power train for the #38 Audi before the outfit travelled to the 3,2 kilometre Cape Town track.

On Friday (27th September) the team went for a careful approach in the three practice sessions. With no proper shake-down, it was a risk-avoiding exercise for the Audi squad. With modest lap times in the first two sessions, Simon Moss and Tschops Sipuka were in 6th and 7th position respectively. It was in the final session that Moss received the green light from the engineers to click it up a notch and he immediately set the fastest time of the day. Sipuka was less fortunate when he encountered a serious engine problem. The team didn’t hesitate and worked the night shift to install a new engine in his Audi S3 race vehicle.

The following race day opened with the usual morning qualifying session and Moss was on the ball instantly. In his second lap he set the fastest time that was out of reach for the whole field, granting him pole position.

In GTC race one, the opening lap was the only challenge that Moss had to endure when he had to fend off a pushing competitor. From the second lap onwards, Moss gradually opened a clear gap over his closest competitor and secured the first victory of the day. Tschops Sipuka unfortunately, had to retire after seven laps with a drive train problem. Championship leader, Keagan Masters (Volkswagen), who initially finished in third position, was given a three place penalty after the race which gave Moss a provisional lead in the championship.

In the second GTC race, Moss was placed at the back of the grid alongside his team mate, Sipuka, as a result of his win in race one. It took Moss nine laps to climb up to P4 after he had “bumped” Johan Fourie (BMW) in an attempt to outbreak in the famous Cape Town corner. Straight after the finish it became clear that Fourie had protested against Moss’s move. As much as Audi All Power team principle Terry Moss tried to defend the racing incident at the protest hearing, all reasoning was unsuccessful. Simon Moss in turn received a three place penalty thereby placing him in 7th position in the final standings for GTC race two.

“It’s going to be anyone’s game for the final round of the championship in four weeks’ time,” Terry Moss commented after the final race. “We have raced hard to close the gap to two points behind the current championship leader. Simon now shares second position with Michael van Rooyen from Toyota. This weekend we arrived with a six point gap and we closed it to a mere two points with two heats to go. With Simon having the most wins of the season thus far and heading into the final round of the season, All Power Audi should be seen as the title favourite once again. It is going to be a humdinger of a GTC finale,” concluded Terry Moss.

The finale round of the 2019 GTC championship takes place on battle for the championship title continues in 4 weeks’ time, with the penultimate round taking place on 26 October at Red Star Raceway in Delmas.