The Toyota Gazoo team last weekend announced its four Gazoo Hilux teams for next January’s Dakar Rally. As expected, the equipe will be led by last year’s Dakar winners, Nasser Al-Attiyah and navigator Mathieu Baumel. Nasser and Mathieu will wish to defend their Dakar Rally title and add to their impressive list of achievements, including multiple FIA World Cups for Cross Country Rallies and Dakar Rally victories. 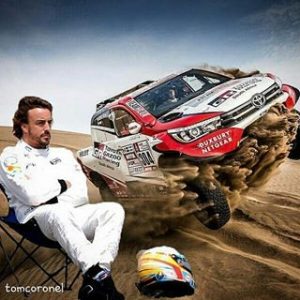 De Villiers, who has had German Dirk vion Zitzewitz by his side since before his sole win in 2009, recently teamed up with Haro and managed to win the Rally of Morocco earlier this month. Alonso, a two-time Formula One world champion, started his rally career only this year and has done some testing with the Gazoo team in South Africa.

The 2020 Dakar Rally will be contested solely in Saudi Arabia, with the event starting on January 5 in Jeddah. The route will head north, before turning southeast to Riyadh for the traditional event rest day. The second half will go through Rub’ al Khali, the world’s largest continuous sand desert, finishing in the city of Al-Qiddiya on January 17