With neither Benavides nor Van Beveren finishing outside the top 4 since the start of the rally their consistently has clearly paid off in the overall rankings. Going into today’s last stage Benavides now leads Van Beveren by 6’38, with Lorenzo Santolino (Sherco TVS Rally) reasonably comfortable in third at 7’25.

The big loser on the day was the rider who had been so impressive up until now, Ross Branch (Monster Energy Yamaha Rally). Openingyesterday morning, navigation and technical issues saw him finish down in 25th place and out of contention overall.

In the cars, the day’s results and very possibly today’s final classification were turned on their head  when Yazeed Al Rajhi (Overdrive) received a 10 minute speeding penalty. Initially credited with the win, 46 seconds ahead of Nasser Al Attiyah to lead the Toyota Gazoo Racing driver by 23 seconds overall, Yazeed had everything to play for.

Now he is down in 5th place, 9’14 behind the new stage winner. Stephane Peterhansel (X-Raid Mini JCW) profits from the situation to finish 2nd on the day at 1’07. Struggling all week with his unsuitably wide 2-wheel drive buggy, that he is busy setting up for the Dakar, Carlos Sainz (X-Raid Mini JCW) finds himself unexpectedly 3rd today at 1’36, with Isidre Esteve (Repsol Rally) putting in a fine performance in his new car to finish 4th at 8’27.

Overall Nasser looks suddenly much more comfortable. He’s in the lead, 6’48 ahead of Sainz, with Al Rajhi now third at 9’37. The only consolation for Yazeed is that his third place going into the final stage looks reasonably assured, with Peterhansel still a long way off at 20’14. 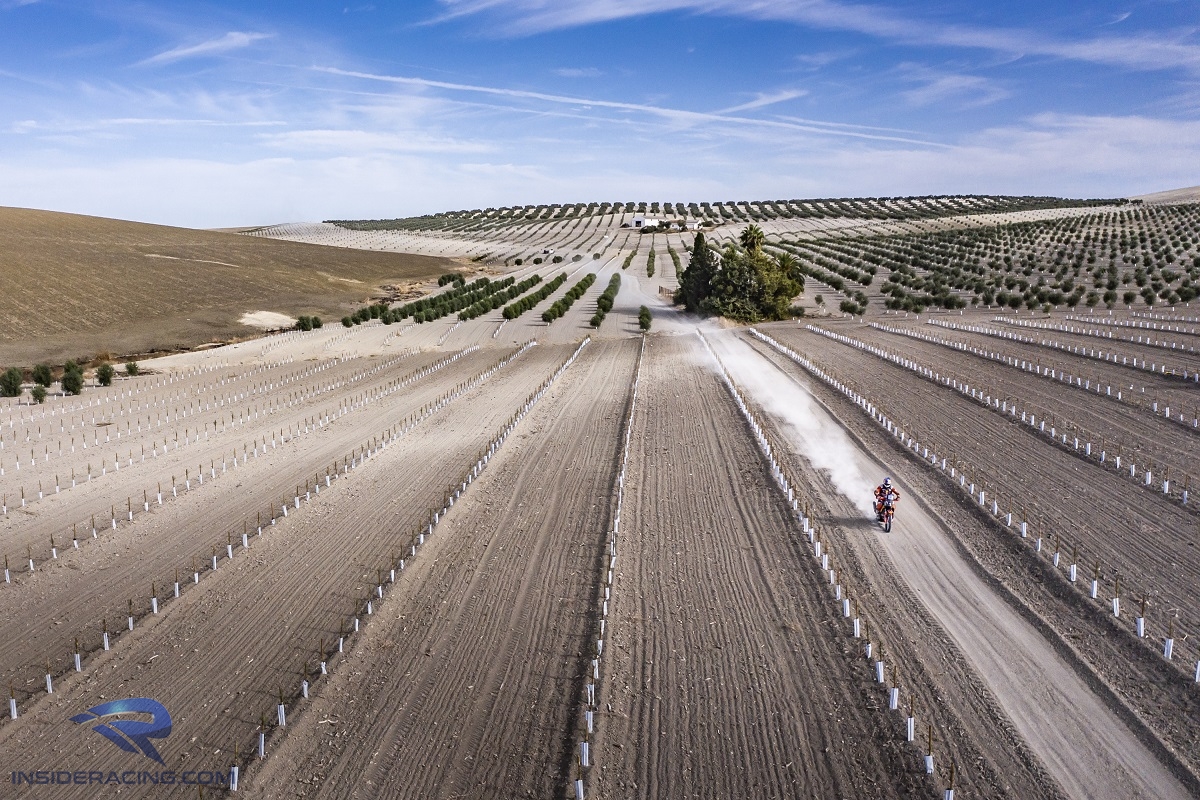 Commented yesterday’s Bike winner, the always rapid Spaniard Joan Barreda (Monster Energy Honda): “At the beginning it wasn’t easy because I had to pass many riders with a lot of dust. But after that I was able to ride at a good pace. We are using something like an enduro tyre but today with all the rocks it is destroyed. All in all, happy with my day.”

Even happier was his Honda Monster Energy teammate Kevin Benavides who, despite starting up at the front and with an injured arm, managed to increase his overall lead going into the last day: “I feel so good on the bike. Yesterday I had a crash but I’m OK. Today I think I did a good job, I made 2 or 3 mistakes with the navigation, but still finishing third and leading overall. Tomorrow is the last day, so I will try and do my best to take victory.”

Almost as consistent as the Argentinian on this Andalusίa Rally 2020 has been the Frenchman Adrien Van Beveren (Monster Energy Yamaha Rally), who has been rewarded for his efforts with promotion to second place overall in the rankings: “I knew that I had to put in another solid day and attack hard if I wanted to get the bike on the podium tomorrow.”

“I rode hard at the start of the special and I could see that the riders in front of me had got lost. I lost a little time as well looking for the track and then opened the piste which cost me a few more seconds. After my crash on the Dakar I’m happy to be back and on form on the bike.”

One of those who got lost, along with Lorenzo Santolino (Sherco TVS Rally) was the man who started two places in front of Van Beveren, first man on the track, the ever-cheerful Ross Branch (Monster Energy Yamaha Rally): “Opening the road was amazing. The first 100 km went well. We had a small technical problem after that which we had to fix and I got a bit lost, but that’s rally, these things happen. But I had fun. It was a really cool route today, very fast and a good test for the Dakar.”

In Rally 2 the special was won by Tosha Schareina (Husqvarna), with David Knight (Husqvarna) second at 02’03 and Libor Podmol (Husqvarna) third at 02’28. All of which allows David Knight to maintain his overall lead 04’09 ahead of Schareina with Podmol third at 12’14. A classification that corresponds to that of the Road to Dakar challenge, with the winner taking home a free entry to next year’s event.

In the quads victory on the stage went to Jerome Connart (Yamaha Raptor) ahead of Alexandre Giroud (Yamaha Raptor) with yet another Raptor, that of the Czech rider Tomas Kubiena, third. Overall Kamil Wisniewski maintains his lead just over 1 minute ahead of Connart with Romain Dutu (Yamaha Raptor) close behind in third.

In the cars it was looking like it was going to be an excellent day for Yazeed Al Rajhi (Overdrive) who was originally credited with the stage win ahead of Nasser Al Attiyah (Toyota Gazoo Racing). For sure it was going to be difficult for him to open the road tomorrow and hold onto his slim lead but he and his co-driver Dirk Von Zitzewitz were in perfect harmony and clearly up for the challenge. But then at 18h15 this evening the car officials announced a 10 minute speeding penalty and the day’s results and with its Yazeed’s ambitions were suddnely looking very different.

Talking before he found out about Al Rajhi’s penalty Nasser Al Attiyah (Toyota Gazoo Racing) commented: “We pushed very hard today but OK we knew it wouldn’t be easy being the first car on the road. We only made one mistake. The digital road book is fantastic and Mathieu is happy because it is not moving around. I think it is a good step.”

Delighted to be reunited with his navigator Dirk, on arriving at the bivouac Yazeed Al Rajhi (Overdrive) seemed to be really enjoying his race and looking forward to what the Dakar future might bring. Yazeed Al Rajhi: “We drove well. Dirk, my navigator, did a great job and we enjoyed it together, that’s most important and we are ready for Dakar. No punctures since the beginning of the rally – only on the super special and that was cancelled. We’re really staying focused.”

Quite how he feels now, a few hours later, is difficult to know but like any top racer you can be sure he’ll be giving it everything he’s got all the way to tomorrow’s final finish line.

Even after Yazeed’s misfortune, still probably out of contention for a final podium, but always positive, Stephane Peterhansel (X-Raid Mini JCW) was relieved to at last have a trouble-free run and get some uninterrupted racing kilometers in with his new co-driver: “We had a better day today. The car was better set up. We have raised it up and now we are almost as high as when we race in the desert, which makes it easy to drive and give us more grip. We made a little navigation error with the modifications, but even without that we couldn’t have matched Yazeed’s speed, more like the pace of Nasser.

In the SSV it was once again Aron Domzala (Monster Energy Can Am) who took the honors finishing an impressive 8th all categories combined. However, there were some new faces behind him today with Philippe Pinchedez (Bombardier Maverick Pinch Racing X3) finishing 2nd in the class and José Hinojo (Can Am Maverick X3) third. Overall Domzala is well in the lead ahead of his teammate Gerard Farres with Rui Carneiro (MMP Can Am T4) now third. Commented Aron Domzala: “Went really good again today. This was a tricky stage where you had to choose the right line, but I like those conditions. The navigation was difficult but we got it right and again no punctures. Overall now we are pretty comfortable going into the last stage and we’re really looking forward to it.”

In the T3 class class victory on the day went to Kevin Hansen (Red Bull Off-Road Junior Team) ahead of teammates Mitch Guthrie and Jean-Luc Pisson (Zephyr PH Sport). Overall Guthrie leads Hansen with Jean-Luc Pisson (Zephyr PH Sport) third. Commented Kevin Hansen: “It was a very good day. Good feeling in the car. The first part of the stage we had a bit of a problem with the dust. Then the rest was very nice and we had a good rhythm and I think in the end the time was quite OK.”