Tanner Foust becomes fourth different winner in four ARX rounds this season Andretti Rallycross’ Tanner Foust and Cabot Bigham finished 1-2 in the ARX of Canada, Round 4 of the 2019 ARX Supercar Championship on Sunday. 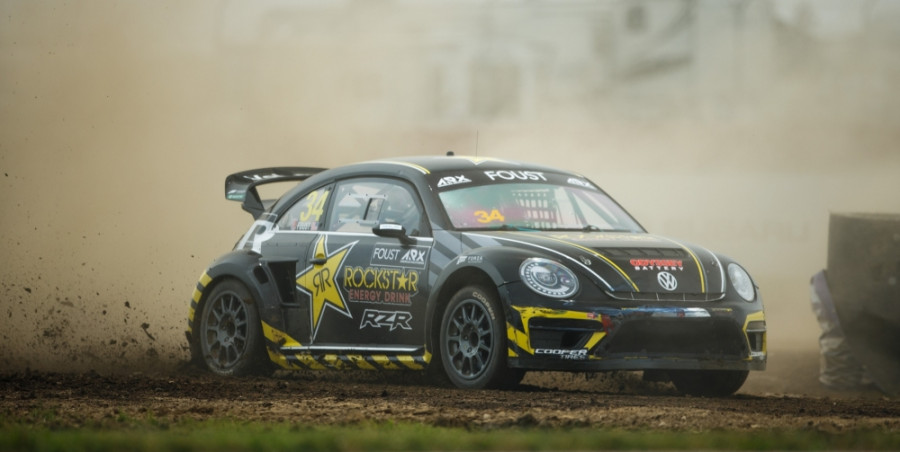 Foust became the fourth different winner in four rounds this season at the Grand Prix de Trois-Rivieres venue by claiming the hole-shot from the outside of the three-wide front row of the grid in the final.

In the No. 34 Rockstar Energy Andretti Volkswagen Beetle R, Foust led the final for five laps in the six-lap race.

Points leader Scott Speed suffered a gearbox issue while leading the second semifinal, surrendering the victory and a front-row start to Loenbro Motorsports’ Steve Arpin. In the final, Arpin made the strongest launch to grab the initial advantage, but out-braked himself into the first turn and dropped to seventh in what was the first seven-car ARX final.

The Subaru team fixed Speed’s Subaru WRX STI before the final, and the 2018 ARX of Canada winner immediately got to work at the start and climbed to third on the first lap. He eventually led the race when Foust and Bigham took their joker laps but dropped back to third after his own joker on lap 6, as Foust eventually claimed a dramatic win.

“To be fair, the Subaru team were the fastest here,” Foust said. “They were faster than all of the (FIA World Rallycross Championship) cars, faster than our cars, so it really felt like being an underdog all weekend as it has all this whole year, which makes the win even sweeter and to come out one-two. I mean, Volkswagen putting up all their hardware from last year, it was very gracious of them to do that, but they’re well-engineered, very fast cars and then you combine it with a great team with Andretti and you still have a competitive machine, even against the Goliaths. It is an awesome feeling, I haven’t felt a victory so sweet in a really long time, so I’m loving it.”

Round 2 winner Chris Atkinson finished fourth in his Subaru WRX STI after battling with Arpin in the final. Arpin’s Loenbro Motorsports’ teammate Travis PeCoy starred once again this weekend with tough overtakes to get by Foust and Speed in the second round of qualifying on Saturday and took the overnight lead in the Intermediate class. On Sunday, he battled with fellow rookie Bigham in qualifying. However, a slow start in the first semifinal meant he started on the outside of the third row in the final and ended up finishing fifth, one place ahead of Arpin.

With two rounds remaining at the Circuit of The Americas and Mid-Ohio Sports Course, Speed leads the standings by five points over his former teammate, Foust, and 14 points ahead of Sandell.

In rounds 5 and 6 on the Trois-Rivieres street circuit, it was all about DirtFish Motorsports’ McConnell holding off intense pressure from Dreyer and Reinbold Racing’s Martell to increase his championship points lead. Martell took the top-qualifier position after a qualifying sweep in round 6, but McConnell launched the quickest off the line to begin the final and responded well to Martell’s fourth-lap joker to hold on to win his second race in as many days.

Martell finished second in both rounds, with DRR’s Cole Keatts finishing third twice as well. Gray Leadbetter completed the best rallycross weekend in her young career in the No. 28 Oil2Soil machine, winning her first qualifying race on Sunday and finishing the finals with two fourth-place finishes.

The series moves on to the ARX of Austin, Texas, on Sept. 28 and the championship weekend Cooper Tires ARX of Mid-Ohio, Oct. 5-6 at Mid-Ohio Sports Car Course in Lexington, Ohio.