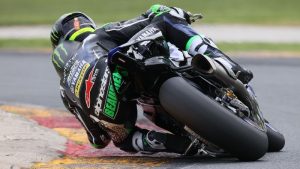 Beaubier started strongly in the morning session with his 2:12.151 putting him 1.3 seconds clear of Westby Racing’s Mathew Scholtz. In the second session, Beaubier really stepped it up, doing a lap of 2:11.145, which broke his former teammate Josh Hayes’ lap record of 2:11.333 set in 2012. That put Beaubier 2.31 seconds clear of Scholtz, whose best lap came in the first session prior to his end-of-the-session crash.

“So far, so good. I felt good as soon as I hopped on the bike,” Beaubier said. “It’s obviously been a weird start to the year. I’m just so pumped to be back here at the races. My bike felt really good. We improved our lap time from how we did here last year, and everything is going well.”

M4 ECSTAR Suzuki’s Bobby Fong jumped up to third in the second session, the 2019 Supersport Champion lapping at 2:13.879 – almost two seconds faster than he went in the opening session. Fourth went to Inde Motorsports Ranch/KWR Racing’s Kyle Wyman, the New Yorker also taking a few seconds off in the second session to lap at 2:14.313.

Fong’s teammate Toni Elias ended the day fifth, the Spaniard ending up 3.2 seconds off his rival Beaubier’s pace on the opening day of the 2020 season.

The two men expected to be at the top of the Supersport heap in 2020 ended the first day of action in exactly those positions. M4 ECSTAR Suzuki’s Sean Dylan Kelly ended up besting HONOS Racing’s Richie Escalante after jostling over the top spot in the final session today. Dylan’s best was a 2:20.981 and that put him just .183 of a second ahead of Escalante. Celtic HSBK Racing’s Brandon Paasch ended up third on the day, another .139 of a second behind Escalante.

The biggest surprise of the day was the fact that defending Liqui Moly Junior Cup Champion Rocco Landers wasn’t the fastest in that class on opening day. Instead, that honor went to BARTCON Racing’s Dominic Doyle, the South African leading both sessions with a best of 2:41.315 – over two seconds faster than second-placed Landers.

Landers may not have been the fastest in the Liqui Moly Junior Cup class, but he was fastest in his Twins Cup debut. Looking more veteran than rookie, Landers led the way on his American Racing/SportbikeTrackGear.com Suzuki SV650 with a best lap of 2:31.283. Robem Engineering’s Jackson Blackmon, another former Junior Cup frontrunner, was second with veteran Jason Madama third on his Syndicate Racing/Apex Assassins Yamaha.

Celtic HSBK Racing’s PJ Jacobsen made the most of his Ducati and Stock 1000 debut, the New Yorker lapping at a best of 2:16.706 on his Panigale V4 R. His best lap was 1.2 seconds faster than Corey Alexander on the Ride HVMC Kawasaki ZX-10R. Michael Gilbert Racing’s Michael Gilbert ended up third on his Kawasaki ZX-10R, 1.4 seconds behind Jacobsen.

Today was the first of three days of action at Road America for MotoAmerica’s opening round of the 2020 season. This first round is being held without fans in attendance, but that will change for round two when the series returns to Elkhart Lake, Wisconsin, June 26-28.