Binder will replace Hafizh Syahrin at Tech3 next season to make his MotoGP debut with KTM having progress from the Red Bull Rookies’ Cup all the way to the premier class with the Austrian brand. 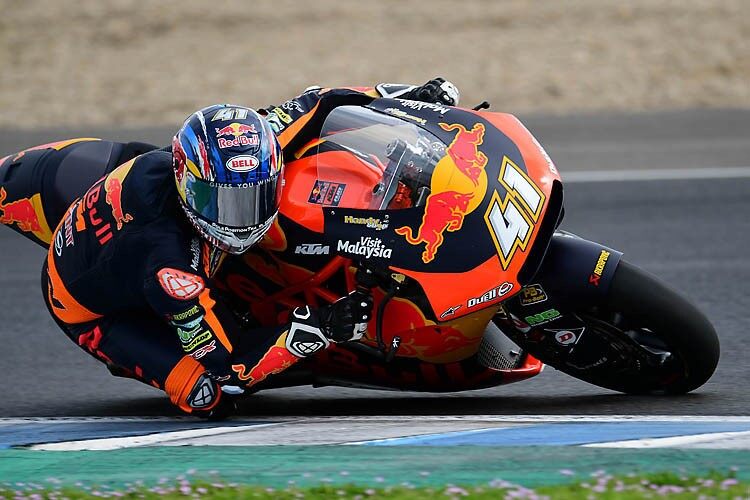 The South African rider had been strongly linked to a MotoGP graduation inside the KTM fold, something Tech3 boss Poncharal hass had an active role in, and feels his attributes will suit the premier class.

“Brad is somebody I have been following since he joined the championship in the Red Bull MotoGP Rookies Cup and later in the Moto3,” Poncharal said. “I have always been amazed by his talent, his aggressivity and his never-give-up-attitude and when you run a motorcycle race team, this is the profile of rider you wish and you love to have.

“I think to have the Miguel Oliveira – Brad Binder line-up reunited with us next year, is something that shows the Red Bull KTM organisation and path is working.

“I think Brad Binder more than deserves a MotoGP ride next year after what he has been showing in the Moto2 the past two seasons.”

With KTM eager to close the gap on the front-running MotoGP manufacturers, Poncharal also remains confident Binder will be instantly up to speed after winter testing in preparation for 2020. Binder reportedly had his first taste of MotoGP machinery at a private KTM test earlier this season.

“I know KTM and I can witness KTM is working incredibly hard to improve the MotoGP bike,” he said. “I’m quite sure that Brad with the winter test will be very happy and very fast from round one on that bike.

“It’s going to be a strong team, as I think there will be a great relation between him and Miguel, his teammate and I honestly believe, I couldn’t dream for a better structure. Miguel and Brad know each other, they are both incredible competitors and when you are a team owner, this is all you wish for.”

With Binder set to complete his current Moto2 campaign before stepping up to MotoGP with Tech3, Poncharal says he’ll be a keen onlooker on his progress between now and the post-season Valencia test in November.

After consecutive runner-up finishes at Assen and Sachsenring, Binder has surged up to eighth place in the Moto2 riders’ standings and is currently the only KTM rider inside the top 15.

“We are going to follow him even closer during the second part of the Moto2 season,” he said. “I’m sure he’s going to win some races, why not fight for the title and we are ready to welcome him from the Valencia test.”