The #90 AKKA ASP Mercedes has survived collisions and penalties throughout the race, and was leading towards the final hours. But a last minute penalty saw them drop to third place, promoting the #8 Bentley M-Sport to second place. The #25 Sainteloc Audi had jumped sister cars #1 and #2 Audi to head the field in the last hour.

Eventually, the #25 Audi crossed the finish line first, leading the #8 Bentley and the #90 Mercedes.

In the Pro-AM class, Black Falcon scored an easy win with the #16 Mercedes, leading the #97 Oman Racing Aston Martin and the #961 Spirit of Race Ferrari. The AM class was dominated by David Perel and the Kessel Racing team in the #888 Ferrari 488 GT3 driven. They never lost the position and had a lead of over 5 laps. Second place and giving Ferrari a 1-2 was Rinaldi Racing with their #488 Ferrari 488 GT3. Third place in class went to Walkenhorst Motorsport in the #36 BMW M6 GT3.

The 24 Hours of Spa 2017 kicked off in the presence of good sunshine and thousands of fans, the #55 Kaspersky Ferrari 488 GT3 started from pole and held the lead firmly with Giancarlo Fisichella behind the wheel. The team retained this position throughout the first hour, with Mirko Bortolotti right behind in the #63 Grasser Lamborghini Huracan GT3. Porsche was in third thanks to Kévin Estre in the #117 KUS Porsche 911 GT3 R.

Bortolotti was now leading the race in the #63 Huracan GT3 leading Marco Cioci who was now in the #55 Ferrari 488 GT3 pole winning car. Rene Rast had brought up the #1 Audi R8 LMS to P3 and was followed closely by the #2 Audi. Oman Racing continued to lead Pro-AM with the #97 Aston while Kessel Racing were still on top in the Am class.

The race lead changed hands several times as the leaders made their respective pit stops. Bentley M-Sport had their fair share of leads with the #7 and #8 cars, after the leading #63 Huracan and #55 Ferrari took made their stops. The #1 Audi also held the lead at one point, the order resumed back to normal soon after every one of the leaders had pitted.

There was a second full course yellow in the race after 54 laps when DTM driver Jamie Green crashed his #17 Audi R8 LMS. A safety car intervention followed soon. The #117 KÜS Porsche GT3 R received a big flow after collecting a 3 min stop and go penalty for unsafe release. Jimmy Eriksson brought out another safety car intervention after crashing in the #84 HTP Motorsport AMG GT3.

So far so good, the Andy Soucek leads the race in the #8 Bentley but he is yet to stop, behind him is the #55 Ferrari with Cioci behind the wheel, leading the #88 Akka ASP Mercedes and Connor di Phillippi in the #2 Audi R8 LMS.

With 10 hours gone, the leaders remained pretty much unchanged. This time, #8 Bentley had showed some persistent after staying in P1 for a significant part of the race. Even still, the Italian GT cars, #63 Grasser Huracan and #55 Kaspersky Ferrari 488 were still very much at large.

The Huracan was now leading with Andrea Caldarelli, followed Abril Vincent in the #8 Bentley and James Calado in the #55 Ferrari. The #2 Audi Sport R8 was fourth leading the #90 Akka ASP Mercedes and the #1 Audi.

Black Falcon were on fire in the Pro-AM class, we haven’t seen them in such good form since their dominant days with the SLS AMG GT3. The #16 Black Falcon AMG GT3 and #18 sister AMG GT3 were leading Pro-AM in first and second respectively. Third in class was the Oman Racing Aston Martin. Kessel Racing and Rinaldi Racing were first and second in AM class giving Ferrari a 1-2 stable lead.

The 24 Hours of Spa broke dawn with the Audi and Mercedes fighting for the lead. Some unfortunate incidents took out several of the top contenders including the pole winning #55 Kaspersky Ferrari 488 GT3 which crashed after making contact with the #90 Akka ASP Mercedes-AMG GT3. 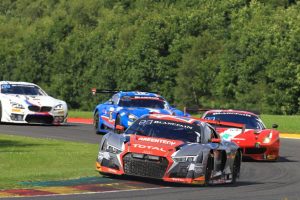 Three Mercedes cars crashed out in the night, among them being the #88 Akka ASP car, as well as the #18 Black Falcon AMG GT3 which was running P2 in Pro-AM and the #00 Team Ukyo Mercedes. Safety car periods included that to remove damaged #77 Barwell Lamborghini and the #11 Kessel Racing Ferrari which collided during the race.

The #90 Akka ASP Mercedes-AMG GT3 now leads the race with 8 hours left to go and with Michael Meadows behind the wheel. Nico Muller is second in the #1 Audi Sport R8 LMS. Third is Team M-Sport Bentley with the #8 car currently driven by Vincent Abril. The #98 Rowe BMW M6 GT3 is fourth with Tom Blomqvist while former race leader Engelhart is 8th with the #63 Grasser Huracan GT3.

Black Falcon continues to lead Pro-AM with the #16 AMG GT3 followed by the #97 Oman Racing Aston Martin and the #51 AF Corse Ferrari 488 GT3. Marco Zanuttini from Kessel Racing leads AM class, the team has not lost this position since the race began. Rinaldi Racing in another Ferrari are second in AM class.