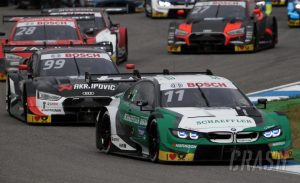 Last week Audi confirmed it would be dropping out of the German-based touring car championship at the end of 2020 after two decades in the series, citing a change of strategy to focus on electric motorsport (Formula E) in line with its product plans but also the effects of the coronavirus pandemic.

The move appeared to catch both the ITR (DTM’s governing body) and rivals BMW by surprise, with the German giant saying it did not enter a dialogue to discuss the outcome.

Criticising the move as ‘astonishing’, it means BMW faces being the only represented brand on the DTM grid in 2021 if the series is able to continue.

“I believe that the series is still very attractive and has a future perspective,” BMW development board member Klaus Fröhlich told the Süddeutsche Zeitung.

“In the short term, the previous DTM approach has a problem, and we may have to think outside the box. There will certainly be a pause for thought and perhaps an interruption. But the DTM has already stopped in its history and has come back.”

“[The announcement] surprised and disappointed me. And I find it not only astonishing, but also unsportsmanlike to drop out and not talk to us as a second partner before. It really blew me away,”

“When Mercedes got out, Ola Kallenius (CEO) called me personally and explained how and why. It was all professional and appreciative. I missed that here at Audi.”

Fröhlich also dismissed Audi’s reasons for quitting in order to focus its attentions on Formula E – a series in which BMW also participates – saying electrification is in DTM’s future too.

“I can’t understand the statement ‘We are going into Formula E for electric cars instead of staying in the DTM’ precisely because the DTM wants to become fully electric by 2025.”