He’s been one of the busier drivers over the lockdown period but nothing fires up Craig Breen like the chance to step back onto the World Rally stage.

And as the truncated WRC series resumes in Estonia tomorrow after the Covid-inflicted six-month break, the reigning Irish Tarmac champion gets another shot at establishing himself in the Hyundai team. 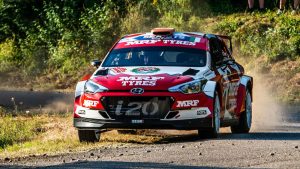 He will line up alongside world champion Ott Tanak and Belgian Thierry Neuville for a rally which has been drafted in to replace neighbouring Rally Finland, one of half a dozen rounds which have fallen victim to the virus.

But Breen and co-driver Paul Nagle have been lucky; they already have a handful of events under their belts in recent weeks thanks to their involvement in the European series.

It is Breen’s willingness to take on a development role for Italian satellite team BRC Racing and Indian tyre company MRF that has impressed Hyundai boss Andrea Adamo.

“He is fully focused, a professional guy who is doing a top job with his targets,” said Adamo. “He’s a WRC driver, but when I told him we have to do this to help BRC Racing, support Hyundai Customer Racing, he never complained one second.

“He understands if he works in a proper way, the way manufacturers work – which he does – then it can be good for him.”

It could be good for him, too, that the second half of the WRC season kicks off with a rally he knows well.

“This will be the fifth time I’ve done the rally and I’m hoping I can make my experience count,” he said. “I just can’t wait to get out there and get going in the WRC again.”

Of course team-mate Tanak knows the rally better than anyone; he hails from Estonia and has won it three times. However, his surprise switch to Hyundai has not gone entirely smoothly and he has ground to make up on WRC leader Sebastien Ogier, the six-time champion who replaced him at Toyota.

The line-up also includes rising Norwegian star Oliver Solberg and his Ulster co-driver Aaron Johnston, who will be among the favourites for the WRC division.