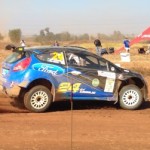 The VW pair produced the performance of the day after starting from fourth place, 58 seconds behind Cronje and Houghton, and winning three of the days stages (6, 9 and 10) on their way to the runner-up spot. Hans Weijs Jnr of Holland and Bjorn Degandt of Belgium made it two factory VW Sasol Polos on the podium when they brought their car home in third place, a further 17 seconds in arrears. They were third overnight and a steady drive saw them score six top-six stage finishes today.

Castrol Team Toyota’s Hergen Fekken and Carolyn Swan will be disappointed with their fourth place after they started the final day in second place and 24 seconds behind Cronje and Houghton. Some overnight changes to their Yaris didn’t work out and they lost a lot of time in the early part of the day before recovering in the final three stages to finish 1 min 11 sec in arrears.

Japie van Niekerk and Gerhard Snyman were happy with their fifth place overall in the privateer New Africa Developments Ford Fiesta). After a poor start to the season saw them score just 11 points in two events, they had a steady run this weekend to add another 16 points to their tally. They finished 1 min 16 sec in arrears.

Sixth and winners of the S2000 Challenge for older specification four-wheel drive cars were Namibian Wilro Dippenaar and Kes Naidoo (PZN Panelbeaters Toyota Auris). They were 3 min 31 sec behind the winners and 14 minutes 10 sec ahead of the second-placed S2000, the Toyota RunX of Piet Bakkes and Shaun Visser.

Bakkes and Visser competed in the reduced points Super Rally on Saturday after they were forced to drop out after stage one on Friday with engine problems. They started 11th and did well to improve to eighth at the finish.

Leeroy Poulter and Elvéne Coetzee (Castrol Team Toyota Yaris), who led the championship coming into this event after winning the opening two rounds, completed the rally in seventh place under half-points Super Rally rules after engine problems prevented them from finishing on Friday.

They worked hard for top-three positions in each of the first four stages on Saturday (including a win in stage eight) and went on to earn valuable championship points that limited the damage to dropping from the championship lead to second place behind team-mates Fekken and Swan. Unofficial scoring sees Fekken and Swan with 59 points to the 57 of Poulter and Coetzee. Third on 44 points are Lategan and White.

Second in the Challenge category and eighth overall overnight, Namibian Thilo Himmel and Armand du Toit hit a rock on stage five on Saturday and tore off a wheel. They eventually finished ninth, 26 min 26 sec behind the winners.

Former S2000 Challenge winners Gugu Zulu and Carl Peskin, now competing in a factory VW Sasolracing Polo S2000, were credited with 10th place overall under Super Rally rules despite getting stuck in stage five. They had been sixth overall on Friday and had had high hopes for improving their position on Saturday.

Prominent non finishers were former Dakar Rally winner Giniel de Villiers and Greg Godrich (Imperial Toyota Yaris), who experienced engine problems on the liaison section between the end of Friday’s stage two and the first service stop at RallyStar. He was fourth at the time after posting the fourth fastest time on the first two stages. Despite their best efforts, the Toyota Motorsport technical team was unable to repair the car in time for Saturday’s start.

The next round of the championship is the Volkswagen Rally in the Eastern Cape on July 11 and 12.