When the board of the holding company of Mercedes sits around the 12th of February, they are going to decide whether they should leave the F1 scene as constructor team.

The team may then be rebranded as Aston Martin.

The poor financial performance, objective to develop road-car technologies and their strife to reduce their environmental footprint will all contribute to the “yea for out” vote. I suppose the incredible cost to run such a team will also not help much.

Even if this move is approved the team will still run 2020 as they have to give the F1 control nine months notice anyway. 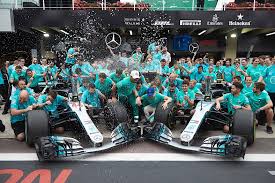 There is speculation that a plan is in place for team principal Toto Wolff, who is already a substantial shareholder of the team, to assume control, sensationally working with current Racing Point F1 team owner and mooted Aston Martin investor Lawrence Stroll.

Sources suggest that if Stroll were to get involved, he would then sell Racing Point – potentially to Belarus-born Russian billionaire Dmitry Mazepin, who made his fortune in the chemical industry. His son Nikita is a high-level racer who has previously tested for the Force India F1 team, which became Racing Point partway through the 2018 season.

The other option may be the Chinese motor company Ceely who already owns Volvo, Ceely, Lotus and Polestar. Ceeley, may then take up a large chunk of Aston Martin.

Mercedes is expected to continue in F1 as an engine supplier, from their Brixworth UK F1 engine division. It already has contracts in place with McLaren and Racing Point and potential deals to supply the new owners of the Mercedes team and current customer Williams.

This would allow the company to continue having a high-level presence in the sport through what is believed to be a profit-making channel.

Mercedes has won every drivers’ and constructors’ championship in F1 since 2014. With a significant rules overhaul due in 2021, it faces a significant hike in costs in order to maintain its competitive advantages. 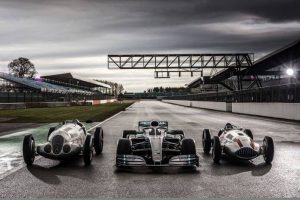 Mercedes has publically set itself the goal of saving 1.4 billion euros (£1.2bn) by the end of 2022 and announced a series of job and investment cuts at the end of last year toward this objective. Although prize money and sponsorship was said to have covered the vast bulk of the F1 team’s expenditure, Daimler’s board is said to be concerned that competing in such an overtly extravagant sport at a time of redundancies and the increasing importance of environmental messaging is inappropriate.

Perhaps the most intriguing knock-on effect of the decision will be to whom the ownership of the Mercedes F1 team transfers.

Possibly, and seismically for the sport of F1, this upheaval could trigger Lewis Hamilton’s departure from Mercedes to Ferrari.

The lure of driving for the sport’s most famous team, potentially combined with the opportunity to end its title drought, and remaining in a fully-funded team on a substantial salary could sway his decision. It would lead to him partnering Charles Leclerc from the 2021 season, with Sebastian Vettel making way.

The Mercedes team’s ownership change doesn’t necessarily mean Hamilton will move and the 2020 season can still play out a bit before a final decision is made.