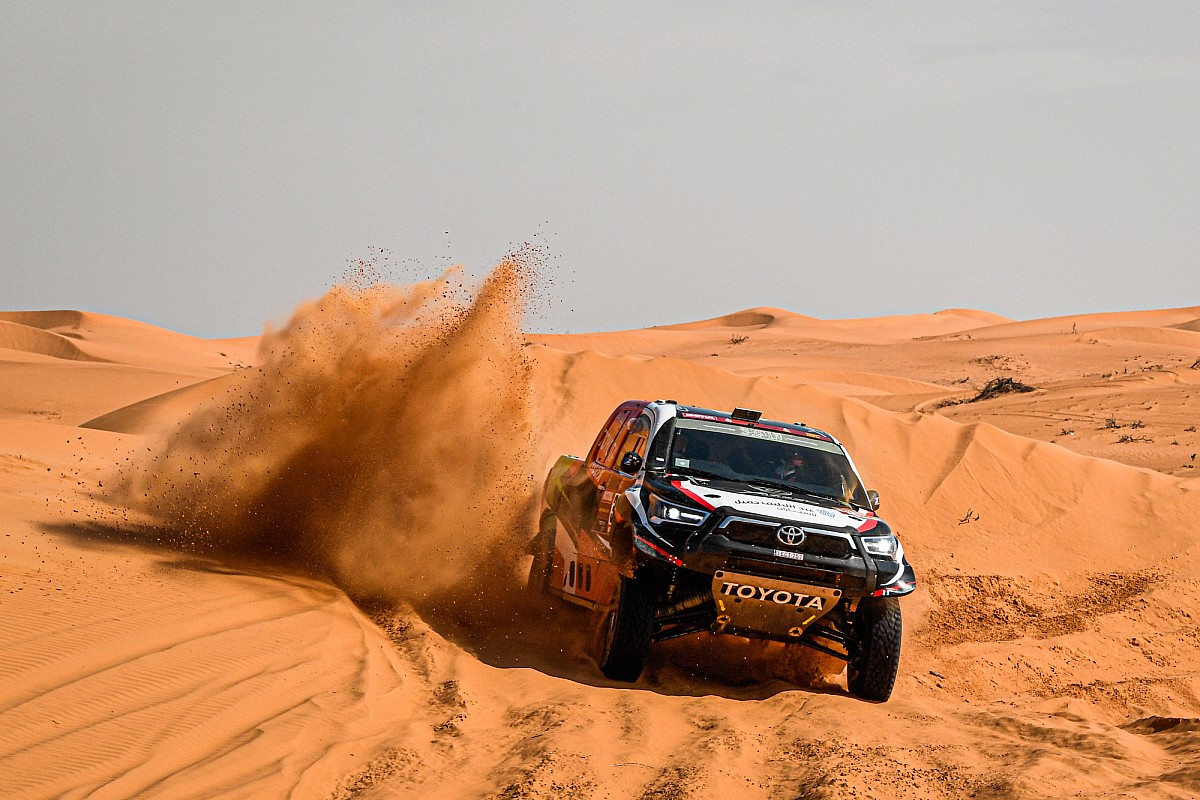 Overdrive Toyota driver Yazeed Al-Rajhi overcame the X-raid Mini of Stephane Peterhansel to claim a maiden stage win in the Dakar Rally on Sunday.
Peterhansel led much of the 453km Stage 7 between Ha’il and Sakaki, the first part of the two-day marathon stage where crews have to do without external assistance, his advantage stretching to 4m15s at its peak.
Load audio player

But a broken wishbone on his Mini buggy left him vulnerable in the final sections of the stage, allowing home hero Al-Rajhi to come through and take a narrow 48-second victory – the first for the Overdrive team in 2021.

Despite his mechanical issues, Peterhansel never dropped below second position and even recovered some ground in the final 137km stretch to the finish line, ending the stage 27s clear of third-placed Carlos Sainz.

Toyota driver Nasser Al-Attiyah didn’t feature in the battle for the lead after the opening three waypoints, ending fourth and nearly three minutes behind stage winner Al-Rajhi – having at one point slipped more than five minutes off the lead.

Rounding out a strong day for Overdrive, Jakub Przygonski finished 12 minutes behind his stage-winning teammate in fifth, while Yasir Seaidan was sixth in the best of the Century cars.

Following a broken suspension arm in Stage 6 that dropped him from 10th to 54th in the overall order, nine-time World Rally Champion Sebastien Loeb suffered another setback on Sunday when his Prodrive-built BRX1 contender came to a halt with a damaged bearing.

The Frenchman, who was running 10th at the 398km mark, is yet to reach the finish line at the time of writing.

With just five stages to run in Dakar, 13-time winner Peterhansel leads the cars category by an extended margin of 7m53 from Al-Attiyah, despite failing to register a stage win so far.

Sainz sits 41m06s behind his teammate, with the rest of the field led by Przygonski more than an hour off the lead.

Roma holds a strong fifth on his team BRX’s debut, well clear of Vasilyev and the PH Sport Peugeot of Khalid Al Qassimi.