The motorbike and quadbike categories were cancelled for the stage, a 477km loop incorporating straight sections with several chains of dunes to test handling skills.

“I’d like to dedicate this victory to Paulo because I’m a former biker,” said Serradori, an amateur who drives an SRT.

“It’s not easy to get motivated after a day like that and my co-pilot Fabien was there as well. But there are two fighters in the car and I’m very happy with this result.”

Alonso, who had finished four times in the top 10 without having made the podium in a stage, was quick to heap praise on his co-driver/navigator Marc Coma, a five-time Dakar champion on a motorbike. 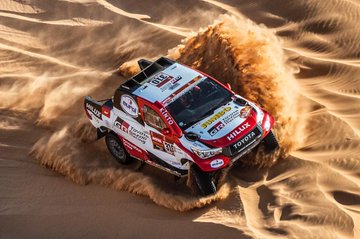 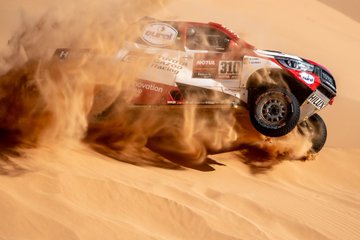 “Today we had an amazing day,” said Alonso.

“We had one puncture unfortunately and we lost a little bit of momentum there, but otherwise the stage was nearly perfect and Marc was unbelievable, you know – the dunes, the navigation.

In his first Dakar Alonso had limited ambitions ruled out winning a stage but now he believes it is within his grasp.

“Initially I thought it was impossible,” he said.

“But after today, obviously when you are second maybe there is a chance, so we will try.” He said not having motorbikes setting the route had upset the rhythm of the stage.

“Having no bikes changed a lot, especially for the first two or three cars,” he said.

“I benefited from starting from the back … I’m happy to complete the day without any issues. It was a beautiful stage, quite fast with a lot of dunes, so it was good. I think the dunes are harder than tracks, but for whatever reason I feel more comfortable.

“I’m not coming from the dunes at all but it seems that I can get a good rhythm and a good flow in the dunes and I’m enjoying so far this second week of the Dakar.”

His second place sees him consolidate his 13th place in the overall standings, more than 3hr 10min off the pace set by Carlos Sainz.

The battle continues atop the general classification between the leading trio of two-time winner Sainz, defending champion Nasser Al-Attiyah and Stephane Peterhansel, a 13-time winner (seven in cars, six on bikes).

Sainz had to open the way on the stage and was swiftly caught by Al-Attiyah and Peterhansel. But the veteran Spaniard then drove his Mini to keep pace with his rivals, meaning he retains the rally lead, 6:40 ahead of the Qatari and 13:09 in front of the Frenchman.

Tuesday’s 9th stage sees the cavalcade travel to the eastern town of Haradh on a 410km special.