The Dakar Rally could be forced to shelve plans to add extra countries to its route for its 2021 running as a result of the global coronavirus pandemic. This year’s Dakar was the first to take place in the Middle East, with Saudi Arabia taking on sole hosting duties in the first year of a five-year agreement with event organiser ASO. 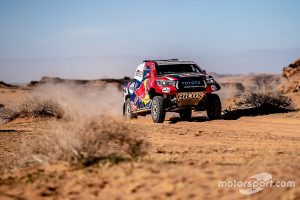 Rally director David Castera revealed in the aftermath of the event that talks had begun with other countries in the region potentially interested in joining a multi-national route for the 2021 event due to take place next January.

However, the evolving COVID-19 situation means that next year’s Dakar could again take place solely within Saudi Arabia, with a deadline to make a decision on the matter looming.

“The initial idea was to have two or three countries, but we also have an option with one country,” Castera told Motorsport.com. “We have several options because we do not know how different health situations will evolve.

“In the next 15 days we have to decide definitively to be able to make the official announcement of what Dakar 2021 will be like in early June.”

Saudi Arabia’s contract means it is guaranteed to be part of next year’s Dakar, but Motorsport.com understands neighbouring countries Jordan and the United Arab Emirates are the leading contenders to join the 2021 route.

However, a multi-national event could prove too much of a logistical challenge in the context of the pandemic, which is why a Plan B is being considered that involves a second Dakar taking place entirely within the confines of Saudi Arabia but with a wholly new route.

“It is the largest country, which offers us the possibility of doing a 100 percent new Dakar there,” said Castera. “I can do a completely different rally from last year, from scratch.

“With a country four or five times bigger than France, if in the worst case we cannot visit any other country, I am sure of having a good, nice and new Dakar.”

Castera also revealed that work has already begun on forming the new route, the Frenchman using satellite imagery and information gathered from this year’s event.

“For now, [the pandemic] affects us a little, but not much, there is no catastrophe,” he said. “There are many ways to work on the route with satellite images.

“I have no chance to verify everything, but I am not going to take many risks. It is a difficult year for everyone and you have to live with this situation. We are adapting to this pandemic and we continue working on the routes.”