The second iteration of the Intercontinental GT Challenge California 8 Hours is coming to WeatherTech Raceway Laguna Seca this weekend, with more cars and more on the line than in the first go-round in 2017.“In 2017, we saw 19 cars on the entry list, and we’ll have 33,” says Greg Gill, president and CEO of WC Vision, World Challenge’s parent. “That is exciting to see and an almost doubling of the grid year over year. I think that speaks to the interest level of a West Coast endurance race. [World Challenge] will always be a sprint series, but SRO does races like the 24 Hours of Spa and Bathurst, so they know quite well how to do endurance racing. We’re excited to be a part of that.” 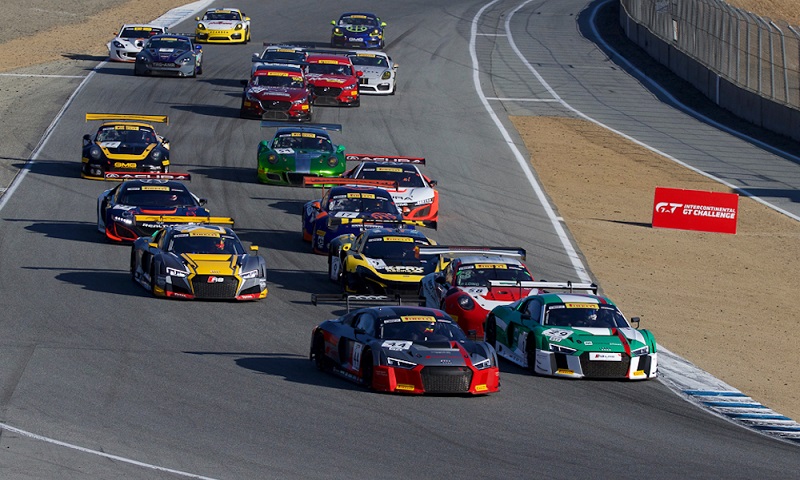 While not a World Challenge event, it is heavily supported by the series, which is now majority owned by SRO, parent of the Intercontinental GT Challenge. And many of the competing cars, teams and drivers will be familiar to World Challenge fans.

The Intercontinental GT Challenge is primarily a manufacturers championship, with the idea that manufacturers support local teams running their GT3 machinery. Audi, Bentley, Mercedes-AMG, McLaren and Porsche have been the major players in the series, which includes the Liqui-Moly Bathurst 12 Hour in Australia, the Total 24 Hours of Spa in Belgium and the Suzuka 10 Hours in Japan. This year, as in 2017, the California 8 Hours is the series finale.

All the manufacturers with the exception of McLaren will be participating in the California 8 Hours, and they’re not just using local teams; several teams are coming from Europe to compete, including Audi Sport Team WRT and Audi Sport Team Land, who were key players in last year’s race, as well as Strakka Racing and SunEnergy1 Racing Team for Mercedes-AMG and Bentley Team M-Sport. The latter will be bringing the latest version of the Bentley Continental GT3 — its first appearance on U.S. soil — that K-PAX will be racing in 2019.

Speaking of K-PAX, they’ll be bringing one of their Bentleys as well, and are one of several U.S. teams and World Challenge regulars. In the GT3 category, they’ll be joined by Wright Motorsport and Black Swan Racing for Porsche. There will also be U.S. teams running a Lamborghini Huracan GT3 (PPM) and a Ferrari 488 GT3 (Vital Speed Motorsports), plus DXDT with another Mercedes-AMG.

Mercedes-AMG lead the points standings for the manufacturers, which might help explain why the marque went from zero entries in the 2017 California 8 Hours to five this year. Mercedes-AMG drivers also lead the driver standings, with Tristan Vautier and Raffaele Marciello tied at the top. Marciello will be in the No. 43 Strakka Racing entry, while Vautier will be in the No 175 SunEnergy1 car, meaning that there will not be a tie after Sunday.

While GT3 is the main attraction, the race includes the GT4 and TCR categories as well, with nearly half the field consisting of GT4 cars from World Challenge regulars. Panoz, Audi, BMW, Ford, Ginetta, Aston Martin, Mercedes-AMG and Porsche all will be represented. Panoz is bringing its full lineup from the 2018 World Challenge season, with Ian James, Mathew Keegan and Preston Calvert piloting the Avezzano. 2018 GTS champ James Sofronas will lead a charge for GMG Racing with Jason Bell and Andrew Davis. Other World Challenge regulars running GT4 include PF Racing, Ian Lacy Racing, Murillo Racing, Stephen Cameron Racing and Rearden Racing, the 2017 GT4 winners.

“We saw good growth in GT4, which was just emerging for us last year” says Gill. “I think GT4 is where we saw the best growth and I love the diversity of cars.”

New this year is the addition of the TCR category. While there are only three entries, an Audi from M1GT and two Hyundais from Bryan Herta Autosport, it should be interesting to see how the teams do with the cars in an endurance race. The Hyundais have an intriguing lineup, with regulars Michael Lewis and Mark Wilkins teaming up with Mason Fillipi in one car, and Bryan Herta teaming with his son Colton and George Kurtz in the other.

The California 8 Hours runs on Sunday beginning at 9:15 a.m. PT. Last year’s race was won by Audi Sport Team Magnus after the top contenders from Land and WRT collided in the late stages. Rearden Racing won the GT4 category in a Porsche Cayman GT4