ONE INTO EIGHT DOESN’T GO. OR IT DOES, BUT 0.125 OF A SEAT IN NEXT SEASON’S WRC ISN’T WORTH ANYTHING TO ANYBODY. 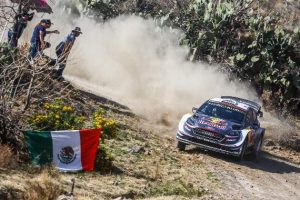 So, what will M-Sport Ford World Rally Team do? Which of the eight drivers likely to be knocking on the door to Dovenby Hall will get in? And which will get a seat?

With Hyundai Motorsport and Toyota Gazoo Racing having finalised their line-ups for 2020, the last remaining factory car untaken is the Ford Fiesta next to Teemu Suninen’s in M-Sport’s workshop.

Here’s the WRC.com rundown on eight into one…

Craig Breen
Has already won two world titles (2011 WRC Academy and 2012 SWRC) in M-Sport-built machinery and is well known to the team. Might have something sorted at Hyundai, but would always be welcome in Cumbria.

Gus Greensmith
Completed much of the development work on M-Sport’s Fiesta R5 MkII and was the go-to guy to fill Elfyn Evans’ seat when the Welshman hurt his back in the summer. He showed great speed and potential in the Fiesta WRC.

Esapekka Lappi
Emerging as one of the frontrunners. The flying Finn had his wings clipped by Citroen’s departure from the championship, but he’s still highly rated as a rising star of the series. And there aren’t many rising stars with a Rally Finland win under their belt.

Jari-Matti Latvala
Remains one of the best-loved drivers ever to work for M-Sport. Won seven WRC rounds in five years as a factory driver with the British squad. Could have something lined up with Toyota, however, which might rule him out.

Kris Meeke
Started his working life at M-Sport, but in the design office rather than behind the wheel. Well-known to company boss Malcolm Wilson and would bring a stunning turn of speed to the Fiesta.

Andreas Mikkelsen
Familiar with M-Sport machinery from the age of 15, Mikkelsen’s three podiums from this season demonstrate he has the speed and potential to deliver points and solid finishes.

Mads Østberg
Scored his maiden WRC win in Portugal in 2012 in a Fiesta and has been part of the factory team before. Another driver well-known to M-Sport and, after a year in WRC 2 Pro, is raring to get back to the main field.

Haydon Paddon
Arguably the unluckiest man in the history of the sport. Twice came close to making his debut aboard a Fiesta WRC this year, but missed out on both occasions. Paddon’s marketable, quick and consistent. A genuine contender.

And Wilson’s view? “I’ve spoken to the majority of those drivers, but right now there’s really nothing to say. We’re looking  at all possibilities for next year.”