An air of expectation and excitement currently surrounds the Toyota Gazoo Racing SA team, as they prepare the new Toyota Hilux Evo for its first race this weekend, the Sun City 450. Taking charge of the new vehicle will be Giniel de Villiers and his regular navigator, Dirk von Zitzewitz. At the same time, Anthony Taylor and Dennis Murphy will campaign the regular Toyota Hilux on the event, while Conrad Rautenbach will do duty beside Rob Howie in the second Toyota Hilux. 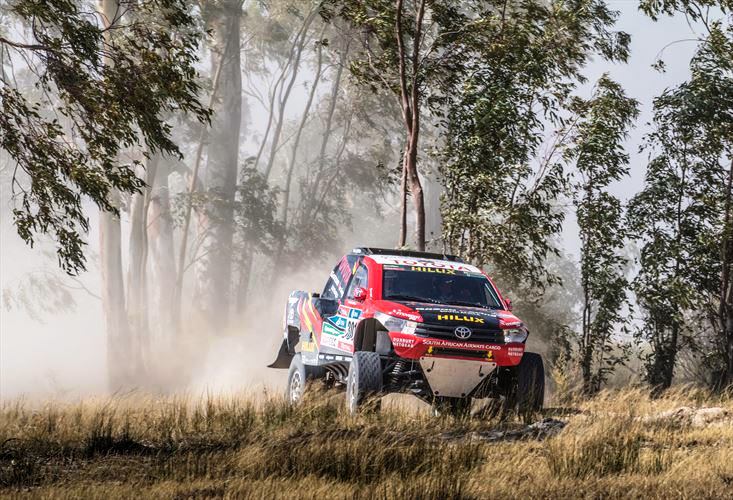 With the driver’s and navigator’s championships already wrapped up by Poulter/Howie, it is important for Toyota Gazoo Racing SA to run both vehicles, in order to ensure a good result in the manufacturer’s championship. With that said, the Toyota Hilux Evo will not be contributing to Toyota’s points haul this weekend, as it will be running ahead of the field as a special dispensation by the sport’s organising body, SANORA.

“We are really excited about the opportunity to give the new Toyota Hilux Evo a chance on the Sun City 450. The terrain is extremely harsh on this race, and in places it is quite similar to what we’ll encounter on the coming Dakar Rally,” continues Hall. “However, our aim is to test the new vehicle’s suspension rather than its overall pace, and as such we won’t be running it at full power.”

With that said, spectators can still expect fireworks from the two four-wheel-drive Toyota Hilux, campaigned on this race by Taylor/Murphy and Rautenbach/Howie. Both these vehicles are identical to the vehicles that finished third and fifth overall on Dakar 2016.

“The move to two-wheel-drive is all new to us, but we’re learning quickly,” concludes Hall. “Giniel did a great job testing the Toyota Hilux Evo last week, and his cool, calm and analytical approach is clearly an asset to the team.”

The Sun City 450 gets under way with a qualifying race at 11am on Friday, September 30th. The main race follows at 8am on October 1st, with the DSP, ceremonial start and finish podium at the Sun City resort. The start/finish for the race, however, is near the village of Tweelaagte, some 30 km to the west of Sun City.