Lewis Hamilton has moved to within four points of Nico Rosberg at the head of the 2016 Formula 1 World Championship standings after claiming a comfortable lights-to-flag win in a wet-to-dry British Grand Prix.  It is the fourth win for Hamilton on home soil at Silverstone to put him on a par with Nigel Mansell, the defending champion thrilled the local fans by escaping from title rival Rosberg in the early stages before managing his advantage to the chequered flag. 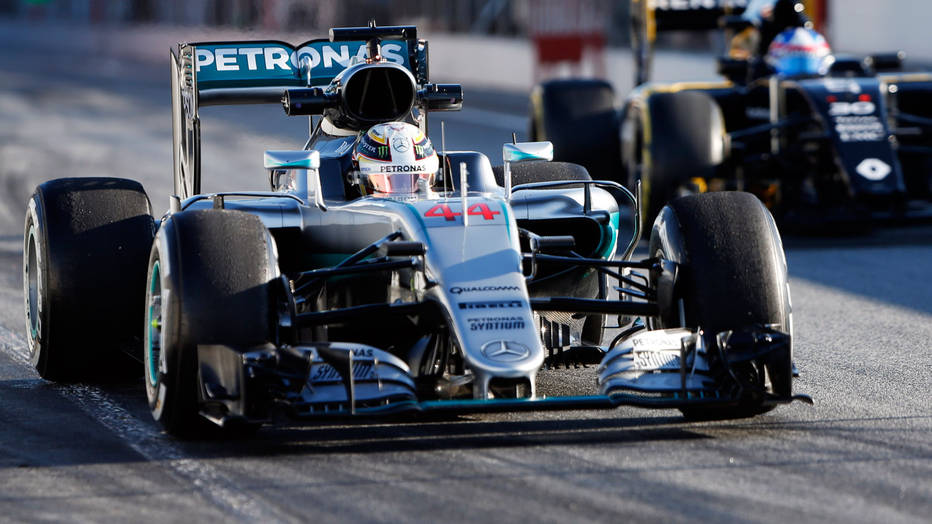 With a heavy downpour in the lead up to the race prompting a Safety Car start, the British Grand Prix eventually began properly on lap six, with Hamilton immediately escaping from Rosberg, building a margin of 3.7secs on the opening revolution alone.

With the entire field pitting for intermediate tyres within three laps of the Safety Car peeling in, those that waited longest to make the switch would ultimately benefit, with Hamilton, Rosberg, Max Verstappen and Sergio Perez – up from tenth – making up the initial top four positions.

From here Hamilton steadily stretched his margin as Rosberg dealt with the attentions of a feisty Verstappen, the Dutchman demonstrating his racing mettle on lap 16 with a marvellous pass for second around the outside of the Mercedes at Chapel.

With the change to slick tyres in the rapidly drying conditions looming, Hamilton pitted on lap 18 and returned to track 7.1s clear of Verstappen but while the youngster briefly got the gap down to less than six seconds with a flurry of fast laps, a wide moment at Turn 1 would clip his charge.

Indeed, Turn 1 – particularly under braking – would prove especially treacherous over the course of the race, with Hamilton one of several drivers to taking a trip across the run-off area on lap 28, albeit without consequence beyond lost time.

However, it was to be the only misstep of his in a race he would control thereafter, Hamilton keeping the margin static even when Rosberg eventually broke through Verstappen’s robust defence on lap 38 of 52 with a DRS-assisted pass into Stowe.

Cruising across the line for his fourth win in five races, though Hamilton has already slashed the margin to Rosberg at the head of the standings to four points, he stands to potentially gain even more ground over his team-mate and rival after the provisional championship leader was placed under investigation for a rules breach.

With Verstappen dispatched, Rosberg had been eating into Hamilton’s lead with a series of quick times in the latter laps, but a gearbox issue would see him lose 7th gear with just six laps remaining.

With Mercedes coming onto the radio to inform Rosberg of the issues – or risk a DNF -, stewards have informed the team its driver is under investigation for an alleged breach of the radio communication rules, an offence that could well see a penalty applied after the race.

For the time being, Rosberg remains second after managing the gremlins, just 1.8secs ahead of Verstappen, the youngster surpassing his father Jos by claiming a third career F1 podium.

An earlier change to intermediate tyres would see Daniel Ricciardo lose touch with the leaders initially, but he recovered to fourth ahead of Sergio Perez, the result putting Red Bull within just seven points of Ferrari in the constructors’ standings.

A late move on Perez would see Kimi Raikkonen secure fifth place on an otherwise dismal day for Ferrari, his team-mate Sebastian Vettel suffering a spin and two offs as he attempted to recover from his penalty-induced 11th place starting position. Picking up a five-second post-race time penalty as punishment for running Felipe Massa off the road, the former champion could only manage ninth place.

Benefitting from pitting with the leaders in the wet, Perez can be satisfied with an ascension from 10th to sixth, despite a spin at Turn 1, while his team-mate Nico Hulkenberg completed a strong race for Force India in seventh position.

Another driver to spin at Turn 1, Carlos Sainz still brought it home for eighth position, ahead of Vettel, while Daniil Kvyat made it two Toro Rossos in the points in tenth.

Elsewhere, Fernando Alonso was dicing inside the top ten when he suffered a wild high-speed spin at Turn 1, dropping him down the order, while Williams failed to score as Felipe Massa and Valtteri Bottas struggled in the conditions.

Beyond Hamilton, it was a disappointing day for the British contingent, with Jenson Button missing the points in 12th, while Jolyon Palmer retired with technical issues.