“A mega race. What he did is unbelievable.”

The fact that those words are attributed to a Fernando Alonso drive does not surprise. However, it wasn’t a performance that earned the two-time World Champion a race win, or even a podium.

Instead, former McLaren racing director Eric Boullier made that statement after the Spaniard finished seventh at the 2018 Azerbaijan Grand Prix.

A collision on the opening lap resulted in Alonso’s McLaren limping into the pitlane on two wheels with both tyres on the right side deflated, a hole in the floor and the front wing damaged.

How he managed to haul it back to the paddock is a mystery in itself.

Alonso finished two places above team-mate Stoffel Van Doorne and averaged half-a-second quicker per lap in a car that should’ve been half-a-second slower.

That race may be the ultimate testament to his remarkable ability to drag a sub-par vehicle to its limit and then some. 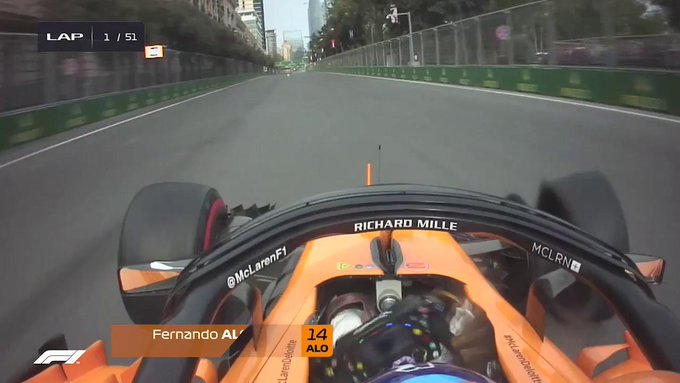 So if a third stint with Renault is now on the cards, his ability to score points for a team that’s in the midst of an intense midfield battle while working through a transitional period could prove priceless.

Sebastian Vettel leaving Ferrari at the end of the season has set in motion a chain of events that has somehow reopened the door for an improbable Alonso return to Formula One… again.

When The Prancing Horse announced Carlos Sainz Jr. as Vettel’s replacement, Daniel Ricciardo agreed to take his seat at McLaren. This vacated a spot for Alonso at Renault alongside the newly-signed Esteban Ocon.

The 38-year-old would bring a wealth of experience to the table that may compliment Ocon’s youthful exuberance and he would almost certainly drive the wheels off his Renault.

On the other hand, he’s also entirely capable of driving the wheels off Renault altogether.

While that drive in Baku was a highlight of his time with McLaren, it a largely unsuccessful venture. The team struggled on all fronts and had major issues implementing the Honda engine.

Alonso’s competitive nature, high standards and demanding personality quickly made for a toxic relationship between team and driver.

He walked away because he wasn’t afforded a car that would allow him to compete and going to Renault now may well mean coping with similar limitations.

Meanwhile, welcoming back a driver who is considered one of the greatest of all-time won’t be cheap either and given the current climate, it may be more prudent for Renault to redirect the funds that will be freed up from Ricciardo’s departure.

The best way to assure that is by finally availing of the talent in their academy. Both Guanyu Zhou and Christian Lundgaard are viable candidates with the former finishing seventh in last year’s F2 Championship.

Alternatively, Renault could even turn to Pierre Gasly whose chances of being promoted from Torro Rosso to Red Bull again in the future are slim. That would make for an all-French line-up which would presumably be received well by sponsors while also being a promising duo.

But whether Renault, and Team Principal Cyril Abiteboul in particular, want to admit it or not, the best replacement for Ricciardo is Nico Hulkenberg [aka Mr. Collateral Damage].

Nico Hulkenberg says that returning to Formula 1 remains his current career goal, but only with an opportunity that “excites” him and allows him to be competitive.Forced out after three years with the team to make room for Ocon, the German would be the most reliable option while offering experience, continuity and proven talent at a reasonable rate – any residue bitterness notwithstanding.

Whether the French outfit are willing to endure the PR nightmare that may come with re-signing Hulkenberg though is a different matter.

In terms of pure excitement and entertainment value, an Alonso return remains as appealing as it is controversial.

Putting another World Champion on the grid, especially if Vettel walks away entirely, benefits F1 as a product.

How productive that may be for Renault, though, is debatable.