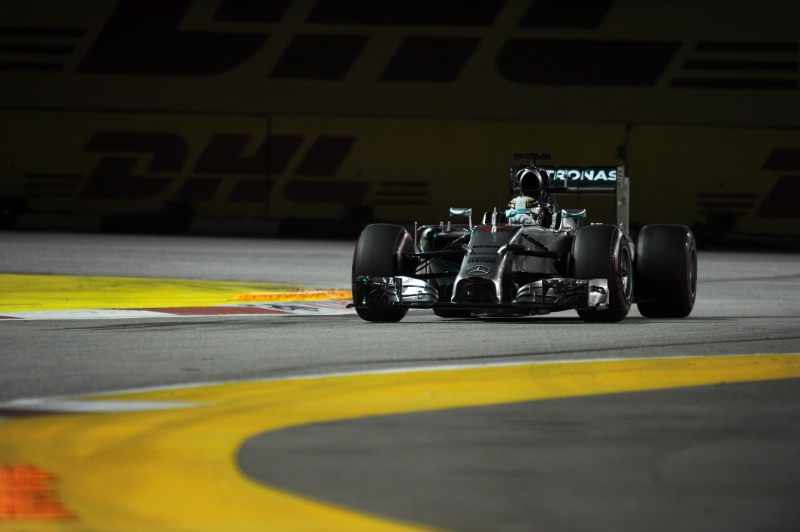 It was the perfect result for Hamilton to take maximum points despite having to overtake Sebastian Vettel in the final ten laps after a safety car allowed many cars to attempt a two-stop race. Vettel held on for second place from team-mate Daniel Ricciardo and Fernando Alonso.

Rosberg’s troubles started before he had even made it to the grid, with Mercedes calling him back in to the garage for a steering wheel change. The issue was an electrical one relating to the gearbox, and it couldn’t be resolved on the grid as Rosberg was left stranded in neutral as the field pulled away on the formation lap.

With Rosberg then starting from the pit lane, Hamilton got away in the lead while Alonso made a strong start up to second. However the Ferrari went wide at Turn 1 and conceded the place to Vettel who had beaten Ricciardo off the line. Rosberg got away in last place and struggled to pass Max Chilton before being stuck behind Marcus Ericsson and retiring when he was unable to pull away from his first pit stop.

Hamilton had built up a solid lead over Alonso when Sergio Perez’s front wing failed following contact with Adrian Sutil, causing the safety car to be deployed. With the two Red Bulls already on soft tyres, Alonso pitted for softs to drop to fourth but Hamilton stayed out and had to build a gap on supersofts before his final stop.

A string of impressive laps saw Hamilton almost create the gap he needed, with his final stop seeing him come out between Vettel and Ricciardo, with an overtake on the lead Red Bull following at high speed using DRS.

Felipe Massa was a lonely fifth place after making a two-stop race work, but behind him team-mate Valtteri Bottas’ tyres suffered a huge drop in performance on teh final lap and he dropped from sixth to 11th.

Bottas had been holding off Jenson Button and Kimi Raikkonen until Button stopped late in the race, and behind Raikkonen a train started to form as the Williams’ top speed kept them at bay.

Jean-Eric Vergne was hit with a five-second stop/go penalty for gaining an advantage by exceeding track limits and was by far the most aggressive driver when he reached the pack behind Bottas, forcing his way ahead of Nico Hulkenberg before passing Raikkonen with a hugely impressive move down the inside of Turn 1.

Bottas was soon dispatched by Vergne as well, and the Toro Rosso was then quickly able to build up the five-second gap he needed to ensure he stayed a hugely impressive sixth at the chequered flag despite his penalty and four pit stops.

With Bottas suffering a nightmare last lap, Sergio Perez came through to take seventh ahead of Raikkonen, Hulkenberg and Kevin Magnussen.

Hamilton took the chequered flag after 60 laps as the two-hour time limit was reached, with his victory seeing him turn a 22-point deficit in to a lead of three points in the standings, with Ricciardo now 60 points adrift.

17 of the 22 cars finished the race, though Kamui Kobayashi didn’t make the start as he parked his Caterham on the formation lap. A double-DNF for Sauber ensures Marussia remains ninth in the constructors’ championship.