British motorcyclist Sam Sunderland has retired injured from the Dakar rally as Fernando Alonso lost more time in the car class. Sunderland, 30, was competing for KTM in the endurance event when he crashed, injuring his back and shoulder.

He became the only Briton to win any class in the 42-year history of the Dakar rally on the bike in 2017. 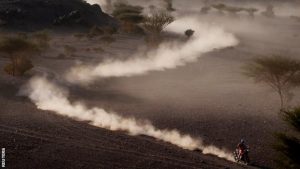 Alonso had to change a damaged wheel and suspension on his Toyota Hilux on the second stage of the race – being held for the first time in Saudi Arabia – currently led by Carlos Sainz Sr in the JCW X-Raid.

The Spaniard sits 18th in the overall classification, three hours 11 minutes behind the leader. 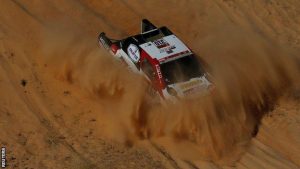 Sunderland hit trouble during the 564km fifth stage. Race organisers said on social media: “Sam Sunderland has had to quit the race after a crash. He didn’t lose consciousness and was quickly attended to by the medical staff of the race.”

The United States’ Ricky Brabec leads the bikes for Honda.