Oddly, its catalyst was a Maserati: the fearsome twin-engined Sedici Cilindri that Baconin – a name soon to be changed under fascistic duress – Borzacchini gunned/sniped along 10km of narrow public road at, wait for it, 154mph, in October 1929.

A fortnight later a swanky do by way of celebration was held in Bologna. Enzo Ferrari, Alfa Romeo through and through, was ‘on the list’.

The Maserati brothers, principally Alfieri and Ernesto, were the better engineers and drivers. Purists.

But Ferrari was the smarter. An opportunist.

Was it by chance that he found himself flanked at the table by wealthy, inexperienced but enthusiastic amateur racers: textile and clothing heirs Alfredo Caniato and Mario Tadini?

There can be no doubt as to who steered the resultant conversation.

An agreement was codified in November: Caniato, his brother Augusto, and Tadini would contribute a combined 130,000 lire; Ferrari 50,000; and Ferruccio Testi, a veterinarian friend and fine amateur photographer, 5000.

The science bit was that Ferrari was able to bolt Alfa and Pirelli to the deal. It wasn’t the amounts – 10,000 and 5000 respectively – but their approbation that counted. 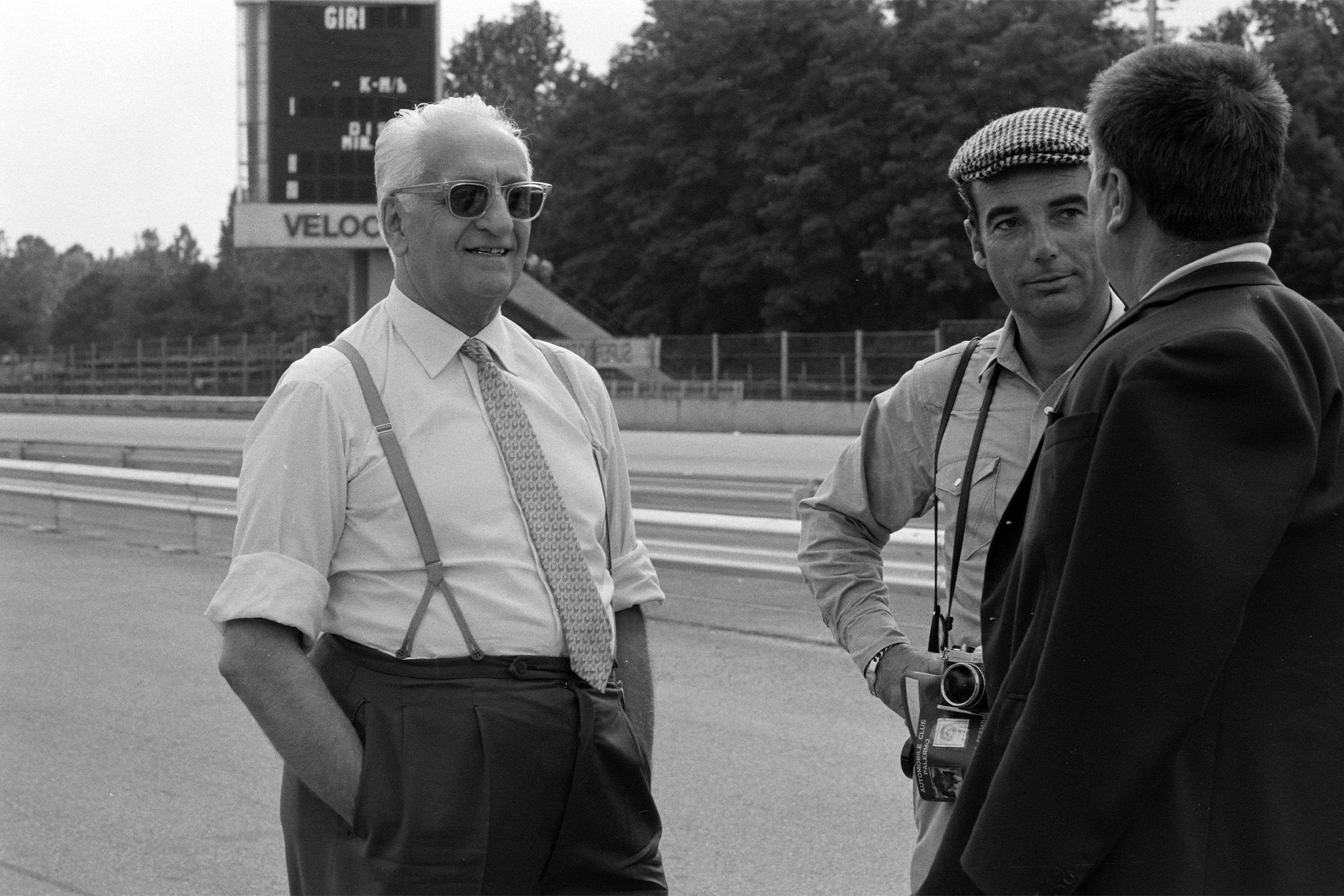 Ferrari’s contacts, gathered, sifted and tended since WWI, had a value to supporter/suppliers Shell, Bosch and Champion, plus Memini and Weber carbs.

Thus the prototype modern racing team, focused and agile at its best, was born – or rather given judicial approval – on Friday 29 November 1929.

Since when, it has often been distracted and clumsy.

That’s part of Ferrari’s enduring charm – for outsiders at least.

Sebastian Vettel is the latest to ride the rearing stallion. Clinging by the skin of clenched teeth, it’s little wonder that he has become increasingly twitchy.

Bad decisions trickle down – until the dam bursts.

He has tried doing two people’s jobs – calling strategy from the cockpit – but that method is a close associate of failure, as his team boss Mattia Binotto is proving also.

Both very capable, they are being let down by the Scuderia’s structures.

The house built around Michael – by Jean, Ross, Rory, Paolo, Nicolas, Aldo, Stefano, Nigel – has fallen into disrepair since Schumacher was ‘unfairly dismissed’ at the end of 2006. 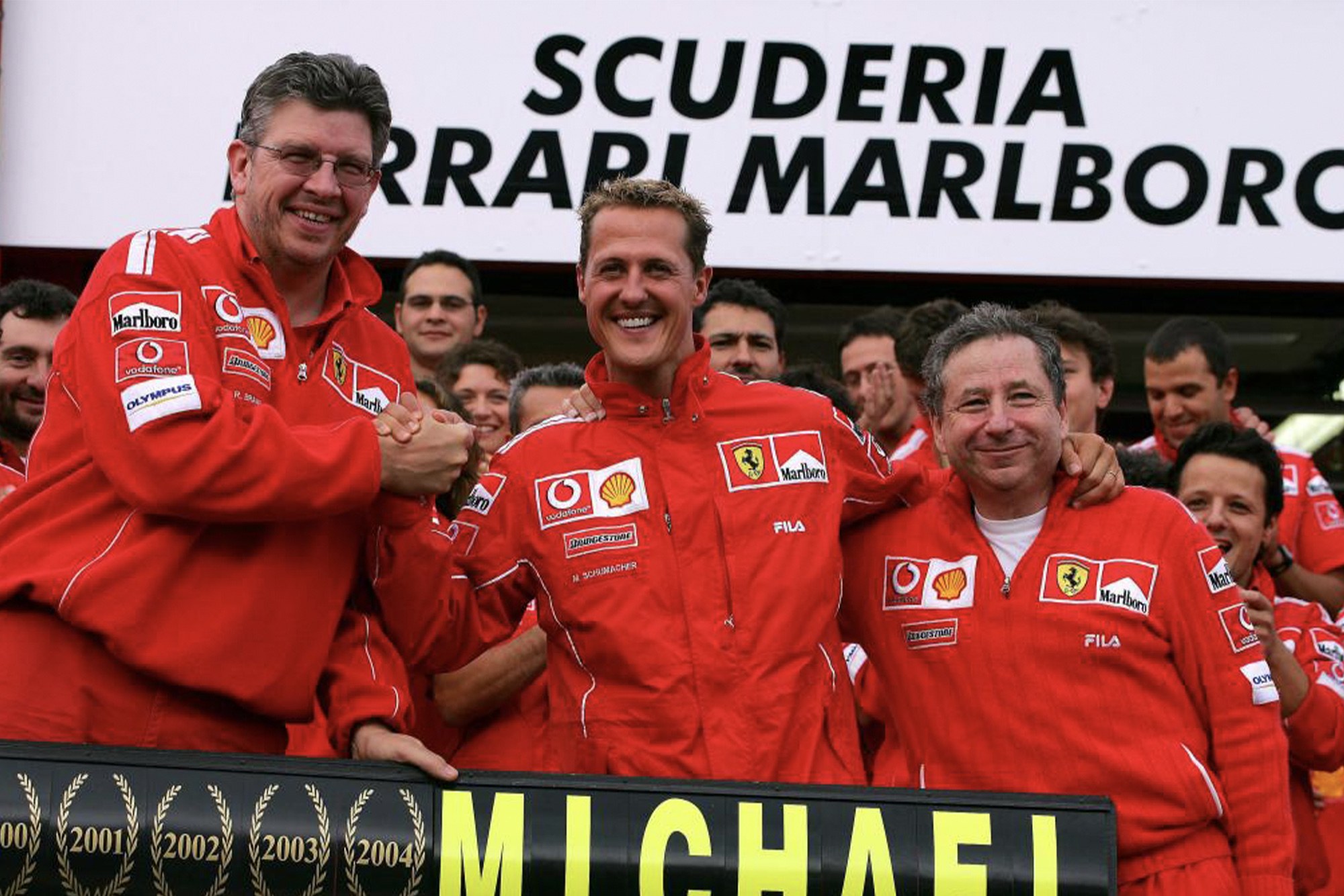 That decision, intended to usher in a ‘more Italian’ era, has ‘succeeded’ – ah, but the grass is rarely redder.

Yet still they will come and – occasionally under their own terms but more usually not – go.

Enzo’s intemperate 1930s relationship with Tazio Nuvolari was – briefly – ameliorated by, wait for it, Mussolini.

An uncomfortably highly pitched tone had been set.

Feeling undervalued after two seasons of domination in Formula 2-as-Formula 1, Alberto Ascari dismounted to join Lancia, who had promised him the Earth – and a D50.

Long development delays forced a rapprochement with Ferrari – Ascari led the 1954 Italian Grand Prix until his engine let go not long past half-distance – but cruel fate denied any possibility of a full-time return.

Juan Manuel Fangio, put simply, got the hell out after winning the 1956 world title.

So, too, did Phil Hill after an unsuccessful but praiseworthy title defence in 1962.

A bright man eager to please yet worn down by machinations, the American was persuaded to join the Ferrari renegades that had formed ATS, a team that served only to emphasise that there was method in Enzo’s madness. 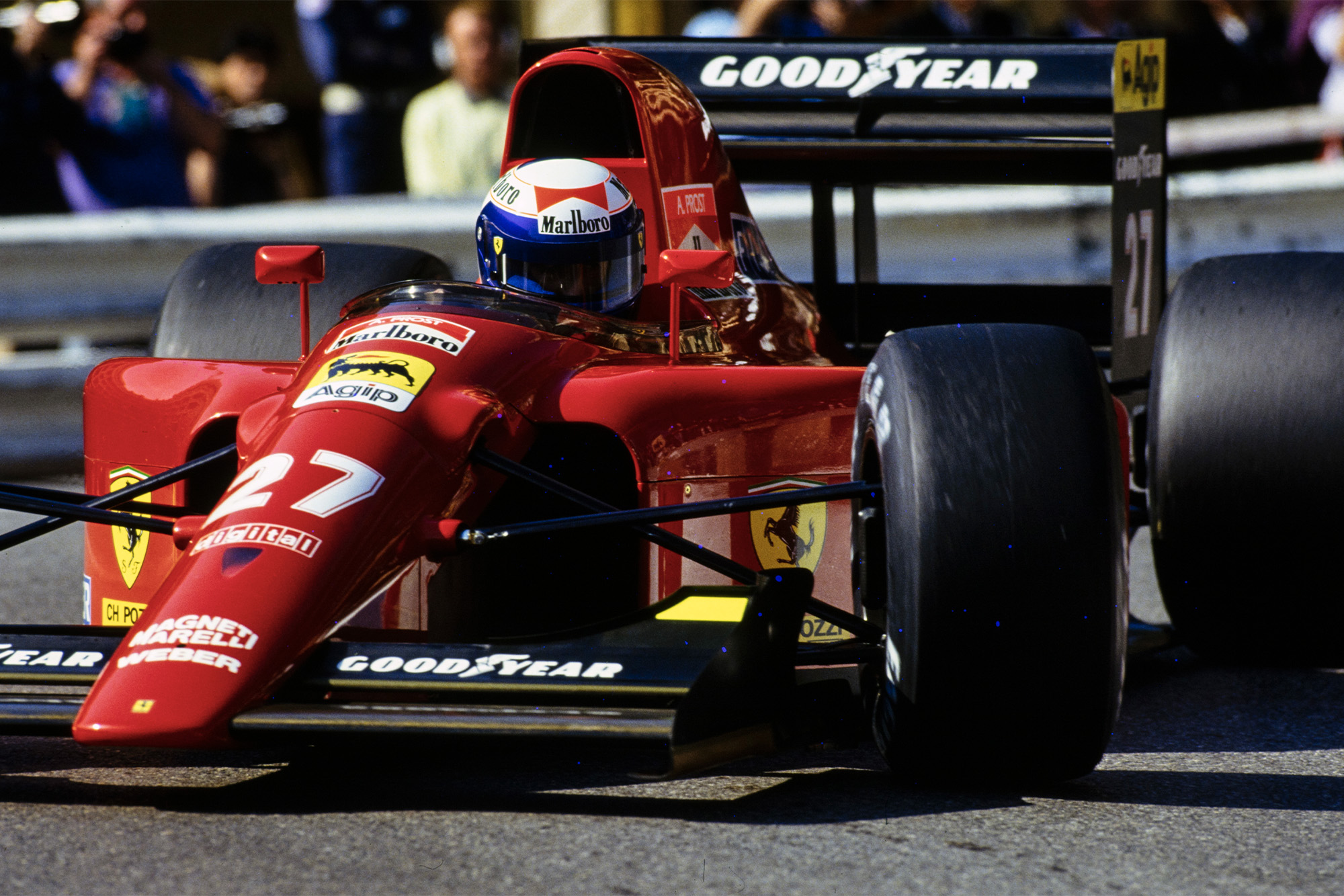 Alain Prost made his feelings known while at Ferrari Photo: Motorsport Images

John Surtees would have liked to stick around and modernise the Scuderia – but he was 30 years too early and left prematurely and forever enigmatically, mid-1966. (He never would reveal what was said in his final meeting with ‘the Old Man’).

Subsequent moderniser Niki Lauda was not so solicitous. His successful title campaign of 1977 was waged under sufferance – he had been appalled by Enzo’s cold reaction to his near-death experience of 1976 – and he ended it with low-blows that he regretted later.

Enzo, fading but feisty still, replied in kind, and it would be six years before an unexpected hug at Imola cleared their air.

Post-Enzo, Alain Prost was cast aside towards the end of 1991 after a telling a few uncomfortable home truths.

And an understandably increasingly disaffected Fernando Alonso – heart overruling head – left to join the McLaren-Honda of 2015 that proved the polar opposite of that of his hero Ayrton Senna.

That Ferrari had announced its signing of Vettel before he could announce his departure made the Spaniard look bad. He deserved better. Much. 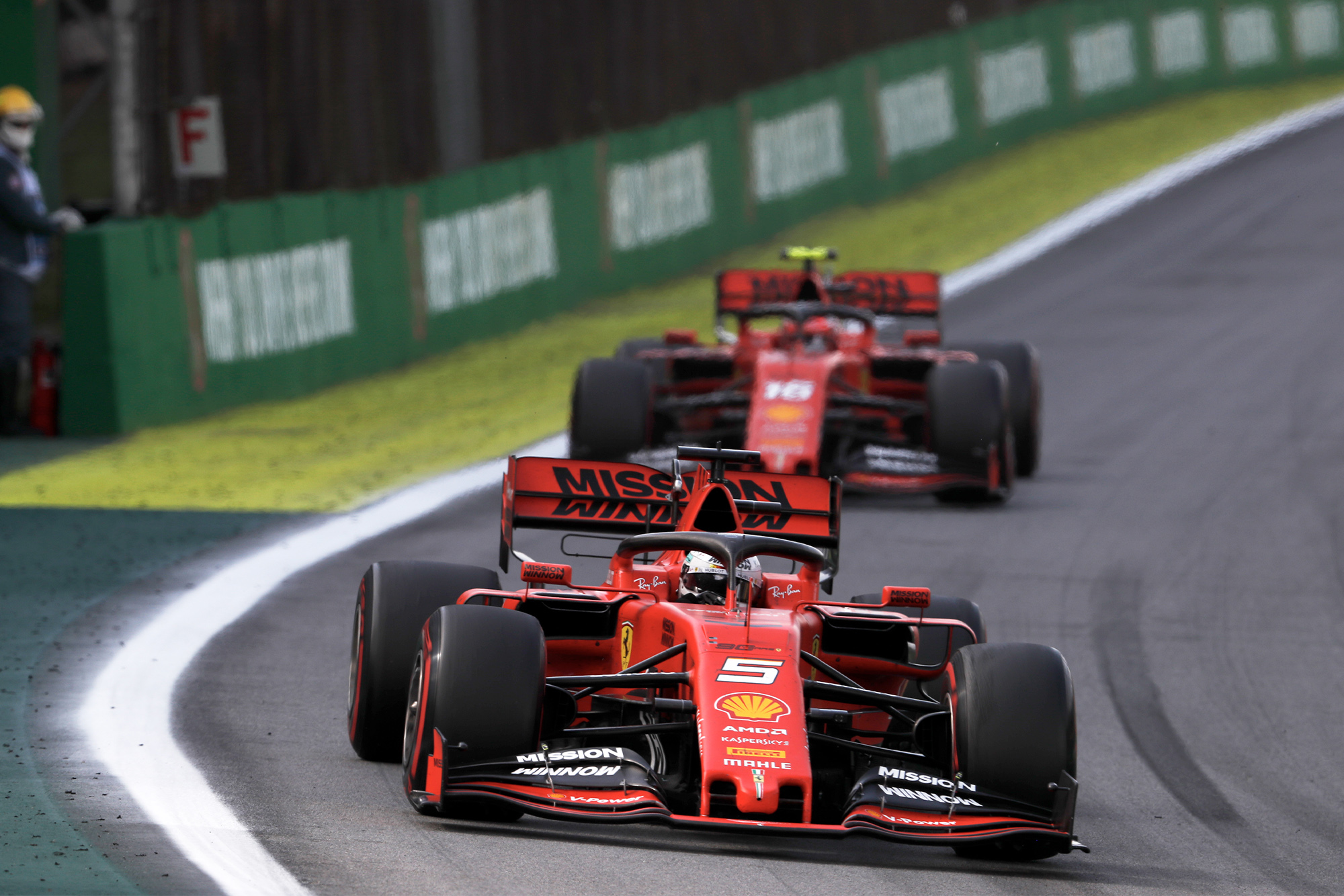 Sebastian Vettel has been challenged by Charles Leclerc all season Photo: Motorsport Images

So, too, had Ascari, Fangio, Hill, Surtees, Lauda and Prost.

(At least they weren’t frisked as they left; mild-mannered Richie Ginther was!)

Vettel ain’t daft, he knows how it works.

But neither is – and so, too, did – Jody Scheckter, and yet the savvy South African world champion stayed on a year too long, as the Scuderia endured its worst sudden dip in performance, and while a less experienced – Gilles Villeneuve was the elder by 11 days – super-talented team-mate, face turned to the sun, drove his heart out.

Vettel insists that retirement is not an option for the foreseeable future – it’s easy to forget that he is just 32 and a father of three (Congrats!) – but is he unwisely delaying a divorce that surely can only become messier?

He does give the impression of being among that rare breed of top-notch racing drivers for whom retirement means exactly that – as it did for Scheckter – and perhaps that makes the big leap more difficult.

Especially with Ferrari shifting under your feet.

Jackie Stewart, as he tends to, got it right. He joined Ferrari for four days – on a handshake! – in 1967. Whereupon Jacky Ickx provided a précis of the ‘secret’ meeting that Stewart had had with Ferrari – spiced with what Enzo had ‘really’ thought about it – and the Scot’s heart sank and mind was made up.

The precocious Belgian stayed a year, rejoined in 1970, won some stuff, while suffering the inevitable trials and tribulations without ever entirely fulfilling his promise, before stalking out, via one-offs with McLaren and Frank Williams, for a final time in 1973.

Stewart, meanwhile, retired for good, albeit in tragic circumstances, having secured a third world title with family Tyrrell.

It takes a strong man not to be wooed by the mystique that is both Ferrari’s monumental strength and fundamental weakness. Luckily for the Scuderia, Charles Leclerc, inexperienced but learning quickly, and the hard way, has his face turned to the sun still.

Worryingly, this season will end in fading light.