The eight and penultimate round of the Inland Championship will take place at Zwartkops Raceway outside Pretoria this coming Saturday, October the 7th, 2017. This will be their third and final visit to this venue for the season.

After the previous round of the Bridgestone BMW Club Racing Series at Zwartkops Raceway where nine drivers broke out of their time classes, the championship picture and track battles took on a new dimension. The Red Star round proved to be an even more significant round than some might have expected.

After heading up both the overall and Class A Championship tables, Julian Fameliaris (E36 328i Turbo) experienced a nightmare of a round at Red Star and is now lying in second behind Lorenzo Gualtieiri (E36 328i Turbo). Gualtieri, now in fourth overall in the overall championship table, will be going all out on a track he favours in an attempt to close the gap on the overall leaders and also try to edge a bigger gap against his main rival in the form of Julian. Rest assured, if all the gremlins on Julian’s car got sorted, he would be up for the challenge as defending champion. Julian’s cousin, Dino Fameliaris (E36 M3 Turbo) will also be ready to pounce should one of the others put a foot wrong as he has proven in the past he is very capable of fighting for and snatching up a win. 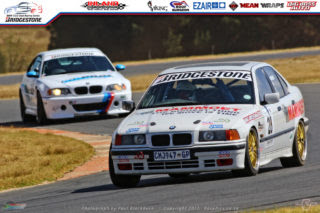 With Lady Luck smiling upon Class B leader Riaan Woest (E46 M3 GTR) he will look forward to capitalising on his excellent performance in the previous round landing him the second spot in the overall championship. He will, however, face strong opposition from the likes of Willie Erasmus (E36 M3) and Andreas Meier (E36 M3). Paul Munro (E46 M3) making a welcome return this round is likely to be joined by JB Breedt (E36 328i Turbo) to keep them on their toes.

Dominating class C this year Philip Smit (E46 M4) has moved into second spot overall and are tied on points with Woest in the overall championship. He could very well wrap up the class C championship this weekend as he is leading Antonie Marx (E46 M3) by 31 points. A good result will make it impossible for Marx to score enough points in the final round. His focus might, however, be in the overall championship but will first have to face down a stiff challenge led by Marx. Jimmy Tsimenoglou (E36 M3) and Shane Grobler (E36 M3 Turbo) also has the potential to interfere in his title aspirations. In the mid-pack though, expect a good tussle between Trevor Long (BMW E36 M3), Oz Biagioni (E46 M3) and Alan Hilligenn (E36 328i).

Currently leading the overall championship by a mere point, class D leader Jan Eversteyn (E36 328i) should face strong opposition from Troy Cochran (E46 325ti) who started using slicks at Red Star. At the previous round, Cochran showed a great turn of pace and was haunting Eversteyn throughout both races on the longer track. Zwartkops being much shorter might be in Cohran’s favour and will be a good race to watch. Special attraction on the day will be Melanie Spurr getting the opportunity to race the BMW Car Club Gauteng’s purpose built track and race car, a BMW E36. This will be the first time a lady forms part of the grid in the Bridgestone BMW Club Racing Series, and with Mel’s vast on-track experience, she is sure to fly the flag high for all aspiring lady drivers. 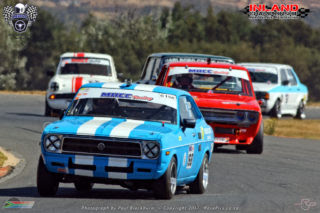 The Midvaal Historic Car Club can always be counted on to deliver great entertainment throughout the field. The Zwartkops spectators will once again be in for a treat this coming weekend with what could be a bumper packed close to forty car grid. Class D contenders will see Shawn Smidt (Datsun 160Y) and Seef Fourie Snr (Datsun 160Y) take charge out front. They should face strong opposition from the likes of Andre de Lange (VW Jetta), Deon van Vuuren (Ford Mk1) and the ever-present Jannie van Rooyen (VW Scirocco).

Some of the closest battles out on track this season came in Class F. Expected to lead that challenge will be Franz Jensen (Datsun 1200 GX) joined by both his sons Peder and Travis in their similar Datsun 1200 GX’s. Mossie Mostert (Datsun GX Coupe) will be making a welcome return this round and will be joined by Jacques Mostert (Datsun GX), Johan Roets (Datsun SSS) and Paddy Venske (Toyota Corolla) to take the challenge to the Jensen family.

Class H sees Johan Venter (VW Jetta) topping the points table, and he will be eager to extend his advantage. Fierce competition can be expected from a returning Bruce Price (Leyland Mini). 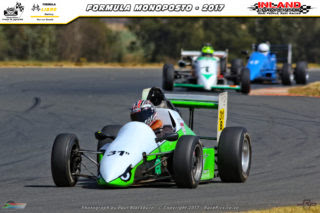 The Formula Monoposto is expected to thrill single seater race fans once again. After his impressive race wins at Red Star, Charles Williamson (Suzuki GSXR600) is likely to continue his excellent performance so far this season bar the previous Zwartkops round where he first suffered electrical issues in race one and a crash in race two. Besides the misfortune, he still set a new lap record for the class B cars and won race one after starting from the pitlane. He can be expected to lead the challenge out front, but first-round winner John Maurien (GTI Ray) is likely to prove a worthy opponent to beat on the day. Other entrants on the day will see the likes of Shaun Harrington (VW Ray), Carel van Heerden (Swift) and Mac Odendaal (DAW Gti) keeping the pair on their toes. Johan Botha (Mygale) and Jannie Geyser (Rhema) will lead the Class C battle. A man to watch will be Jan Jacobs (Formula Vee) entering this championship for the first time this year.

The Historic Single Seaters will once again be in action with entrants such Pat Dunseith (Formula Ford), Chris Clarke (Titan Mk4), Alan Grant (Protea Triumph), Richard Baker (Titan Mk5), Shaun Hillary (Alexis MK18) and Des Hillary (Dulon MP15BF) being some of the names to watch out for.

As the INEX Legends approach the home straight with two rounds remaining in this year’s Championship, it is anyone’s guess who will walk away with the title, from the four protagonists who have largely set the narrative this season. 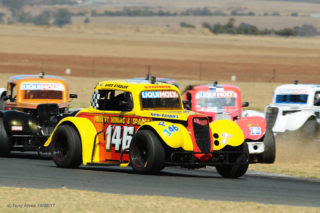 After a credible and spirited performance in the recent Legends World Finals held in Finland, Richard Upton, who flew the national flag alongside Masters Championship contender Richard van Heerde, will feel bullish about his chances of clinching this year’s title. However the overall points leader still trails Willie Erasmus, and Anro Stadler in the Pro Class standings and neither of these two will make it easy for Upton when both still have title aspirations of their own. The young lion Altan Bouw is the fourth member of the leading quartet who also wants his name engraved on the winner’s trophy and should he put together two good final rounds things will get interesting. Other stars of the Pro Class who have contributed much to this year’s title fight are brothers Shaun and Shjael Nel and Jordan Larsson whose season unravelled at Dezzi Raceway when he suffered engine failure. A non-start at the next round at Red Star effectively ruled him out of the title fight, but Larsson has led and won numerous times in 2017 and will want to end the season with a flourish.

If the younger generation has thrilled throughout the year, the Masters have been their equal more often than not and age differences have mattered not one bit. The aforementioned Richard van Heerde did superbly to finish runner-up in the Golden Masters Class in Finland and will have the bit between his teeth as he takes the fight to class leader Charl Roux and his brother Gerhard, in his bid to wipe out their advantage in the standings. But besides this leading trio, the senior citizens have fielded some more fabulous talent in their ranks, and stalwarts like Johann van de Venter, Ian Upton, and Steve Nel should not be outclassed at Zwartkops. Johan Jooste and Giles Moore are two other Masters regulars who are always in the mix.

Steven Levin and Marnus du Plessis make up the semi-pro class, and they too want to contest the last two rounds convincingly. Levin, in particular, has had a difficult season and hopes to end 2017 better than he started.

The Big Z will provide the perfect canvas for a no holds barred contest which should set the scene for an explosive season finale at Red Star in November. 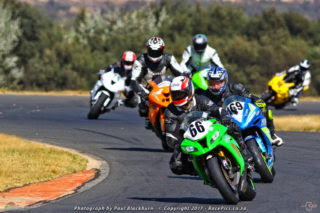 Motorcycle racing fans are also in for a treat in the form of the Bridgestone Sub10 Superbikes, Bridgestone Challenge and Classic Superbikes. Currently heading up the Class A log in the Sub10’s is Riaan Fourie (Kawasaki ZX10). He is expected to face strong opposition from the likes of Byron Rothquel (BMW S1000RR) and Clifford Ogle (Ducati Panigale) that missed the previous Red Star round. The Sub10 Class B challenge is expected to be led by Johan Nortje (Kawasaki ZX10) and Hendrik Erasmus (BMW S1000RR). With more than a handful of other competitors that will be lining up on this grid, one can be assured of plenty of action throughout the field. Someone to look out for will be lady racer Zoe Bosch making a welcome return to racing on the Monroe Racing Kawasaki ZX6.

Currently leading the Bridgestone Challenge Class A and tied on points for the overall championship with Jens Venter, Ian Thomas (Kawasaki ZX6) will be out to score as many points as possible. He will, however, have to ward off a tough challenge from the likes of Johan Nortje (Kawasaki ZX10), Hennie Swanepoel (Kawasaki ZX10) and Kyle Tavares (Honda CBR). Here too there are a number of other very willing and able competitors more than ready to step up their performance for a spot on the podium.

Classic Superbikes racing fans will once again be treated to great thrills from a grid mostly made up of immaculately prepared historical Suzuki machines. Expected to lead out front will be guys like Mike Alborough (Suzuki GSXR), Iain Pinkerton (Suzuki GSX) and Lee Dutton.

Yokohama Modified Production Cars will showcase some of the fastest front wheel drive machines out on the track. Leading the challenge in the turbo class will be George Economides (VW Golf Turbo). However, recent history has proven Keagan Pottas (Honda CRX Turbo) to be more than a worthy opponent beating Economides to the line on a number of occasions already. Paul van Niekerk (VW Golf Mk1 Turbo) will be lurking looking for an opportunity to pounce should any one of them put a foot wrong. Other entrants on the day will see Brian Peck (VW Polo), Franco Di Matteo (Mazda), Dirk Lawrence (Honda Ballade) and Jeff Langeveldt (Honda CRX) also compete for honours in their respective categories.

The Big Boss Auto Super Saloons will also be putting in an appearance with their fast rotary powered space frame cars.