There will be no super special stage or ceremonial start on this occasion and the competitive action will get underway on Monday, April 20 with the first provisional 194km timed section from a start at the Losail International Circuit.

Minor route amendments are being made this week by event officials and the precise distances of the stages may change slightly over the coming days, but selective sections of 397.56km, 401.15km, 400.55km and 364.28km had been originally planned to test teams to the limit before the ceremonial finish at the bivouac, near Sealine, on Friday, April 24. In an intended compact route of approximately 1,917km, over 90% will be competitive. 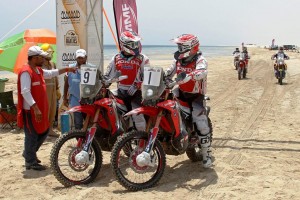 “We have been making subtle improvements and changes to the route and the format of the event each year,” said Nasser Khalifa Al-Attiyah, president of the QMMF and FIA vice-president MENA. “Feedback last year from competitors was extremely positive and we had one of the most exciting ever finishes in the motorcycle category. Our terrain is varied and demanding and our team has laid on a difficult route with very challenging navigation.”

Administration checks, scrutineering, the initial briefing and the pre-event press conference will take place at the Losail International Circuit, north of Doha, on Saturday, April 18 and Sunday, April 19.