Skip to content
Ford Performance has dropped a teaser image of a special variant of the all-electric Mustang Mach-E.

The release of this photo comes a few days after RTR Vehicles teased a tail-happy variant of the Mustang Mach-E and less than two weeks after a mysterious Mach-E prototype was filmed doing donuts at the North Carolina Center for Automotive Research. Given the fact that the likes of Vaughn Gitten Jr and Ken Block have been tagged in this teaser from Ford Performance, it is clear they have been involved in the project in some way. 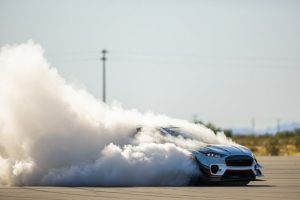 While this is quite clearly a Mustang Mach-E, it does have a plethora of bespoke features, namely a widebody kit, a unique hood, massive aerodynamic canards on the front bumper, and a large splitter.

In all likelihood, this tire-smoking Mach-E will benefit from an upgraded variant of the all-electric powertrain that drives road-going models. It remains unclear how far Ford will push the power and performance envelop nor what plans it has for the car. If we were to guess, Ford will probably use it as a promotional tool to drum up interest in the electric SUV by handing it over to a host of its drivers for various stunts and public appearances.

We won’t have to wait long to see just what Ford has cooked up as the car will be unveiled tomorrow.