With Pierre Gasly, Carlos Sainz Jr. and Antonio Giovinazzi recording their best ever finishes in Formula 1, Lewis Hamilton making a rare mistake that cost Alexander Albon second place, Daniel Ricciardo recovering from a five-second penalty and broken front wing to finish in sixth place, Charles Leclerc and Sebastian Vettel colliding and Max Verstappen delivering a dominant drive from the front, the latest edition of the Brazilian Grand Prix had everything. 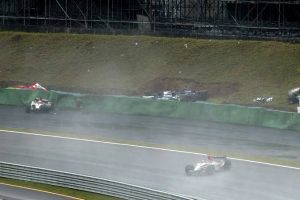 By the end of the race, it was easy to forget that Robert Kubica had nearly ruined the contest following an unsafe release from the pit that allowed Hamilton to undercut Verstappen for the lead.
While that was a moment of great drama, in the context of the end of this thriller, you would be forgiven if it was to slip your mind.

As it happened, Hamilton was unable to capitalize on Kubica’s indiscretion, with Verstappen catching and passing the world champion within a couple of laps.

Verstappen continued to dominate the race from the front as he had during his first stint, with Hamilton the only other driver on the track able to match his pace to any extent.

However, the drama really began when Valtteri Bottas suffered a mechanical retirement while chasing down Charles Leclerc on lap 52 of 71 around the 15-turn, 2.677-mile (4.308-kilometer) Autodromo Jose Carlos Pace road course in Sao Paulo, Brazil, which triggered a safety car, a series of pit stops and a bunching of the field.

The safety car brought the likes of Ricciardo and Sainz into the mix, while it also brought the two Ferraris of Leclerc and Vettel within touching distance.

What followed was a beautiful overtake by Leclerc on his teammate into turn one that saw him move up into fourth place, after starting 14th on the grid.

Vettel had started second, but was overtaken by Hamilton on the first lap for the second time in two races before looking generally slower than both Verstappen and Hamilton for much of the race.

With such a turnaround in fortunes in mind, Vettel looked to return the favor instantly with a DRS move down the first straight, but with Leclerc moving across for the breaking zone and Vettel perhaps going in too hot, the two drivers collided and both suffered race-ending punctures.

It was a moment of pure drama that sent the Brazilian crowd into raptures, but one that will have made Ferrari team principal Mattia Binotto recoil.

Time and again this season his drivers have shown an unwillingness to respect one another and the team.

Regardless of whose fault it was on this occasion, the argument for Ferrari installing a clear number one is becoming increasingly compelling.

It was a model that worked to great effect for Ferrari in the Michael Schumacher era of dominance, but with neither driver clearly ahead of the other, it will make for a tough decision on the part of Binotto.

Beyond the Ferrari pit wall, the race continued with the safety car out once again.

In response, Hamilton pitted back to fourth position with the hope that his fresh tires would allow him to overtake Gasly, Albon and Verstappen for the win.

As it happened, Hamilton made it around just Gasly and with just over one lap to go, he spun Albon after attempting a risky overtake, sending Albon to the back and allowing Gasly to move into second.

Gasly just about held on to second ahead of Hamilton, with the Mercedes and Toro Rosso stuck in a drag race across the finish line.

Hamilton was then penalized for spinning Albon, an error he admitted to, meaning Sainz was promoted to third for McLaren’s first podium finish since 2014.

For Sainz and Gasly, this result represents a fantastic achievement and a moment of redemption for two drivers who have fought through varying levels of difficulty over the past two seasons.

The race also gave us an enthralling insight into what a championship battle between the Hamilton and Verstappen could look like in 2020 or 2021.

Red Bull have not been able to provide Verstappen with a car that can compete with Mercedes, but with cars of a similar speed, the two could end up battling for wins every race weekend.

Finally, this was a great advert for Formula 1 and gave an exciting glimpse into what the series would like look if drivers from any team could realistically challenge for podiums.