Giordano Lupini continued in his victory march in the 2019 Burly Pro WP GTi Challenge as he drove his CiR Construction/La Vie de Luc/Accelerate Special Gasoline Golf 1 GTi to another two wins in Class C on Saturday to increase his overall title advantage and take an iron grip on the class championship chase. Lupini qualified second in a treacherous session before avoiding trouble as he bided his time to make his move and take a lead he would not relinquish again though the day. 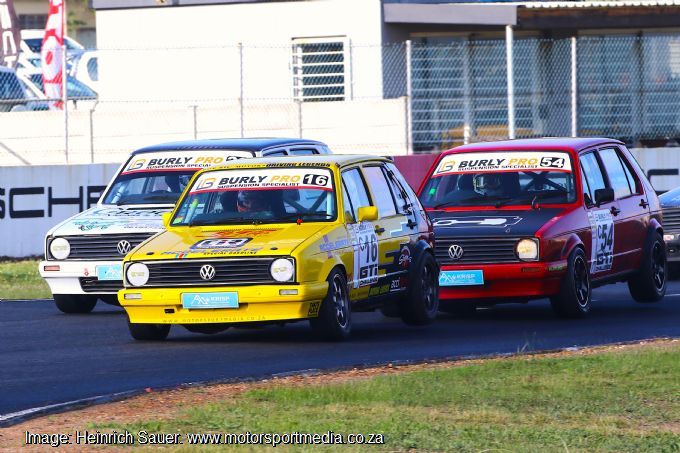 “Today was another awesome day in what is becoming a pretty incredible season,” Giordano explained. “Qualifying was quite extreme — yes, it was terribly slippery, but Gozzi and the GAP Motorsport guys gave me a perfect set-up, which came to me as the session went on and it was on rails toward the end, but I just could not get a gap in the traffic and with cars spinning all over the place. “I’d love to have got a clean lap in — that would have been amazing, but second was good.
“I let the first race come to me — I bided my time and stalked pole man Jarred Simpson for a couple of laps, but it was getting a bit wild with all the leading C guys bottled up behind a B car once again, so I made my move and got the hell out of there. “I still had Ashley van Niekerk’s B Polo ahead and while he was holding me up a little, we had just enough of an advantage to allow me to keep Jarred at bay as I followed Ashley home for the class win.
“The second race was great — Class B winner Eden Thompson was far enough ahead to allow me to push and I enjoyed a great flat out lights to flag win without being held up by the B battle for once! “It’s been a dream season so far — seven wins out of 8 starts and four overall wins out of four, so I’m enjoying growing this little trophy collection. “More important, I now have close to a 30 point advantage in the class championship and we lead the overall chase by 15 points — we are really delighted with that.
I would like to thank our sponsors CiR Construction, La Vie de Luc Mineral Water and Accelerate Special Gasoline, Taki’s Place and Bob Ric Motors for the support that makes it all possible, out technical partners acciDent Guru and Franschhoek Sign Co. for our great new look and of course Andrew Goslett, the GAP Motorsport crew and my dad for all the effort that is going into this campaign behind the scenes.
This is a great team effort and it’s my honour and privilege to bring it home. “See you at Killarney for our next race meeting on 6 July.