In the absence of Schumacher from public life since his skiing accident in 2013 it was son Mick who greeted Hamilton in parc ferme. The handing of Schumacher’s red helmet to Hamilton was a deeply touching moment and symbolised the passing of history on behalf of one great to another, and whose dynasty may well begin another chapter in 2021.

Across the border in Paris Rafael Nadal was in the process of demolishing fellow legend Novak Djokovic to join Roger Federer on 20 Men’s Singles Grand Slam titles. For both players it is an astonishing figure to reach when the previous record stood for a decade at 14. Djokovic, the youngest of the trio, is within reach on 17.

Later the same day in the United States LeBron James propelled the LA Lakers to their first NBA title in a decade, drawing them level atop the all-time list with the Boston Celtics on 17 titles, an achievement that has added poignancy following the death of Kobe Bryant in January.

In a world of endless debates and counterarguments it sparked the usual discussion over who owns the keys to the GOAT moniker – the Greatest Of All Time.

Statistically, Lewis Hamilton and Michael Schumacher are joined atop the pile on number of Formula 1 victories – at least for the next 13 days – and it is unthinkable that the Briton will not soon equal the record of seven world titles. But greatness goes far beyond statistics, pure numbers and trophies in the cabinet. There are the moments that take your breath away, the narrative arc, and the human element that makes people turn to sport as a form of escapism and entertainment.

Can anyone, in any sport, really be the GOAT?

“There’s a lot of talk, in all sport, of greatest past and present,” said Hamilton a couple of hours after the race as the achievement gradually began to sink in. “I think it’s almost impossible to compare people. I think it’s different times, we are evolving as human beings. If you put all the top drivers that have been the most successful in the sport and put them in the same cars wouldn’t that be something? But all the talk of who is and who’s not [the greatest], that’s not important to me, what’s important is the journey in this time and while I’ve been here.

“I’m proud of what I’ve been able to do, how I’ve navigated through, I’ve definitely made lots of mistakes, but that’s life, we all do that. I think yes you can be definitely remembered for having the most [wins] and that will be something special to have but as I said it’s the journey, it’s what we’ve done along the way, it’s obstacles you’ve faced, and everyone’s got a different journey and a different way of doing things.” 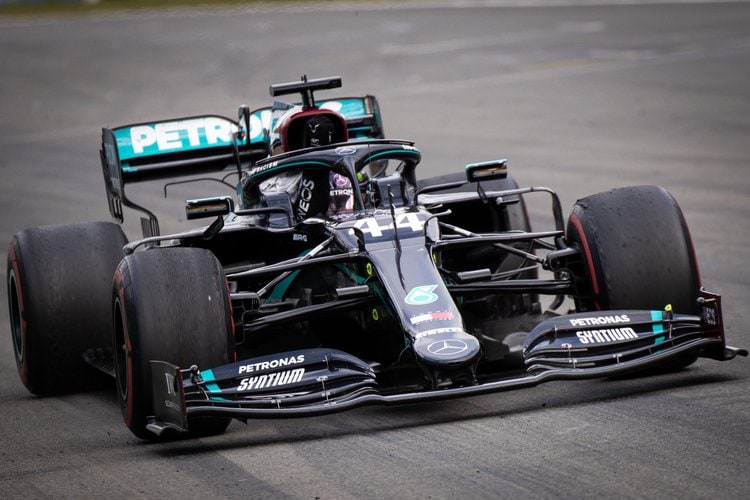 As Hamilton has grown as a racer and as a person so too has his willingness to fight for causes he believes are right. There are those who have been cynically quick to point to Hamilton’s alleged hypocrisy, hurling accusations of ‘whataboutism’, on occasion in the process highlighting the elements upon which Hamilton is shining a light. He has become increasingly aware of aspects such as animal welfare and environmental concerns – trying to drive change within Formula 1 and in collaborations with other projects – while amid the global movement in 2020 regarding diversity and equality he has dared to speak up in a landscape in which he is a minority, using his platform to promote humanitarian causes.

“In the past I think life was just so fast, bouncing from one race to the next, one event to the next, it was way too fast-paced a life,” said Hamilton on the pre-pandemic world. “Even hopefully when this thing passes us I don’t want to go back to how it was before.

“But what I can say is I’m not done yet. I still feel like I’m able to improve, and am still driving at a really good level.

“Honestly, I think what’s been really clear to me is, yes, it is great having these wins but the more important things are what you do out of the car, I think that’s really where the impact can really be made in terms of wanting to be remembered.

“I’ve never really wanted to be remembered other than to my family, but these results, the journey I’ve had with my fans, hopefully they will remember me. I think all of you would want to be remembered for being a good human being and as someone who actually cared for the world and did what they did with great intentions, and that’s all. I don’t think of any other way.

“It’s not the most important thing for me to be remembered as the greatest or the best as I said because I have so much respect for all those drivers in the past.

“I don’t feel like I need to compare myself to them as I’m different. And we’re all different.” Hamilton has the ability, the time, and the strength of the Mercedes team to push the record even higher, potentially into three digits, and even further. But just as Schumacher’s tally of 91 wins once seemed insurmountable for another driver, so too will whatever benchmark that Hamilton leaves – but it is mere folly to assume no-one else will ever threaten that record.

“In 20 years’ time, whenever it is, when I’m looking back, I can promise you this: I will not be talking down any young driver that is coming through and succeeding. The responsibility as an older driver is to shine the light as bright as possible and encourage those.

“There’ll be someone else, whether it is Max [Verstappen] or whoever it may be, who is going to be chasing the record that I eventually set, I can’t be wishing him… it would be the wrong kind of characteristic and approach to be hoping he doesn’t break it. You should be encouraging it and hoping that they live to their full potential and if that means getting to that record, that’s amazing.”

Who is the greatest? There are personal preferences, different characters, and different competitors across eras that required different skillsets. It will be an ongoing discussion with no definitive answer. But one thing is certain – Hamilton is forevermore assured of his position among the legends. And even then, that position was assured long before he got to 91.