Hagan (photo above from earlier in the season) won in Funny Car for the third-straight year at the track, going 4.014-seconds at 322.81 mph in the final round in his MOPAR Dodge Charger SRT Hellcat to beat Shawn Langdon’s 4.046 at 317.49. Hagan, a two-time world champion, picked up his second win of 2019 and 31st in his career. 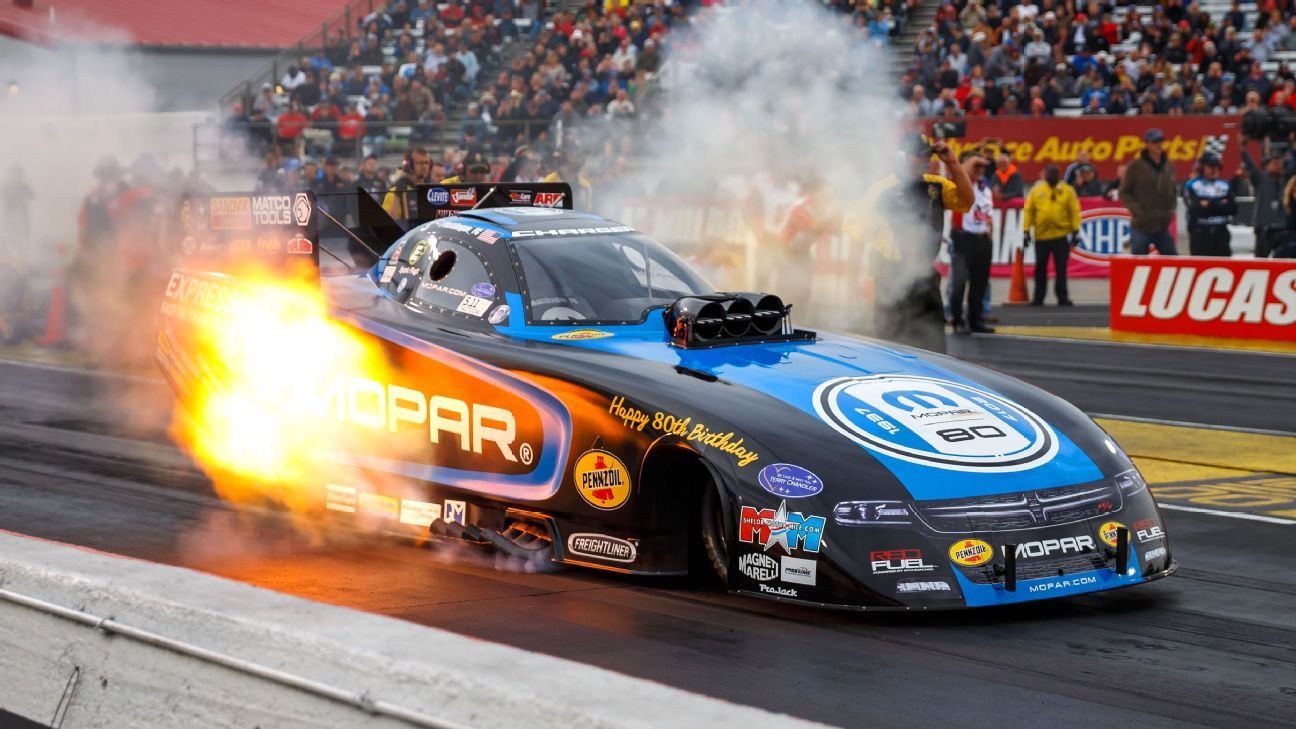 Hagan knocked off Don Schumacher Racing teammates Jack Beckman and Ron Capps, and Bob Tasca III, who entered the race on the strength of back-to-back wins, to reach the final round, going a weekend-best 3.958 at 326.24 to start his day. He stayed consistent the rest of eliminations to beat Langdon, who reached his second career final round in Funny Car with round wins against Jim Campbell, points leader Robert Hight and Tim Wilkerson.

“We went down the track in qualifying and that created a lot of confidence in our team,” said Hagan, who also picked up his 350th career round win during eliminations. “Rolling into race day, I knew we had a great car and I was confident in it.

“We kept lane choice every pass and that was big. I’m really excited we were able to get another win and we needed this to be our turning point this season. We needed to gather up some momentum and I feel like we’re making the right steps to move forward coming out of this race.”

In Top Fuel, Torrence, the points leader and defending world champ, kept his dominant stretch going, rolling to his seventh win in the past eight races during the 2019 season with a run of 3.861 at 321.58 to beat Scott Palmer in the final round in his Capco Contractors dragster. Torrence, who is nominated for the Best Driver Award at Wednesday’s 2019 ESPY Awards, picked up his 34th career win by beating Austin Prock, Terry McMillen and Richie Crampton to reach his eighth straight and 50th overall final round.

Palmer advanced to his second career final round thanks to wins against Dan Mercier, Antron Brown and No. 1 qualifier Clay Millican, going 4.014 at 251.25 against Torrence. The victory also gives Torrence, who already clinched his spot in the Mello Yello Countdown to the Championship this weekend, his 13th win in the last 19 races dating back to last year’s playoffs and 26th win since 2017.

“I really, really want Scott Palmer to win a race, but we want to win them all, too,” said Torrence, who qualified ninth and won from the seventh different qualifying position in 2019. “That was a great final round. That’s a really good group of guys, and to see the progression we’ve both made, it’s pretty neat and really special for us.

“Without being cocky and just being confident, you carry the mindset of you want to go everywhere and win. With doing that, you don’t treat anywhere any differently. This is a fun place to come to and it’s a pretty neat part of the country.”

The Mello Yello Drag Racing Series continues July 19-21 with the 40th annual Dodge Mile-High NHRA Nationals presented by Pennzoil at Bandimere Speedway in Denver. It also marks the start of the NHRA’s famed three-race Western Swing. Eliminations of all three events will be shown live on the FOX national broadcast network.