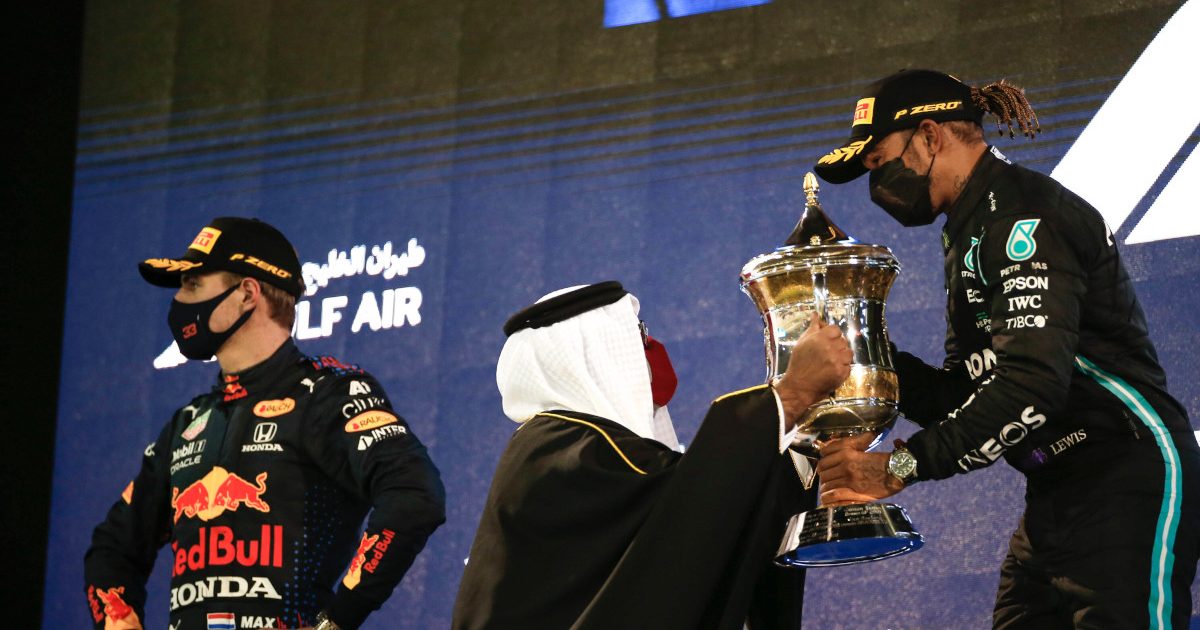 ‘The track limits at the exit of turn four will not be monitored with regard to setting a lap time, as the defining limits are the artificial grass and the gravel trap in that location,’ read his pre-race notes.

Hamilton followed the letter of the law, racing outside the lines 29 times.

At least he did so until mid-way through the race when Red Bull pointed this out to Max Verstappen and shortly after the stewards issued a warning to Mercedes.

Bonnington: Lewis we’re getting warnings about track limits at Turn 4 so just tidy that up.
Hamilton: Understood. I thought there was no track limits?
Bonnington: Yeah copy that on the track limits Lewis, but we are getting the messages from Race Control so you will get a black-and-white flag next time. Then five seconds.

Hamilton, who said at the time that it was “bulls**t”, was not impressed as he felt the rules were changed mid-way through the grand prix.

“It was very confusing,” said the race winner.

“Most tracks we’re not allowed to put four wheels outside the white line but this weekend on that particular corner we weren’t allowed to on Friday.

“In actual fact, you could go two wheels outside the line but you can’t go past the blue and white kerb, but in the race you can, and that is what had been written so going into the race then you can.

“But it’s quite a different corner when you have to do one or the other in terms of approach, and it is faster when you can go out, but then whatever is the boundary when you are overtaking?

As it happens, he feels he benefitted from not running wide at Turn 4, saying it helped keep Verstappen at bay.

“It’s actually… I think it’s faster in the end for me, it helped me look after my tyres actually, so I’m grateful for the call and ultimately it meant that Max wasn’t able to overtake off track.”

Verstapen was the biggest loser in the Turn 4 rules as he passed Hamilton for the lead late in the race by running wide at Turn 4.

Red Bull immediately told him to hand the position back to the seven-time World Champion.

“Throughout the race I was told that people were going wide so they told me to do the same because you do gain lap time doing it, so I did, and then at one point they told me not to do it any more,” said the Dutchman. “I don’t know.

“In qualifying it was not allowed, your lap time got deleted and so I don’t know how it got to the point where people were doing it without getting warnings, but at the end of the day, when I was fighting Lewis, I went outside of the track limits, so I think quite quickly the race director was onto us to tell me to give the position back to him and that’s exactly what I did.”

FIA race director Michael Masi has clarified that Verstappen didn’t have to hand the position back because he ran wide, he had to because he gained an advantage while doing so.

Hamilton took the win by 0.7s ahead of the Red Bull driver.