The Briton is now tied on the all-time titles tally list with Michael Schumacher, after eclipsing his win record at Portimao last month.

Hamilton’s race came to him in the second half of the grand prix. After jumping into second-place on through the opening corners in wet conditions – however a mistake dropped him down to fifth place.

Hamilton swapped his Wet tyres for Intermediates on lap 9 and bided his time, gaining track position as those ahead pitted.

On lap 37, Hamilton the 35-year-old overtook race leader Sergio Perez and extended his gap to over 30 seconds seconds to cruise to the race victory. 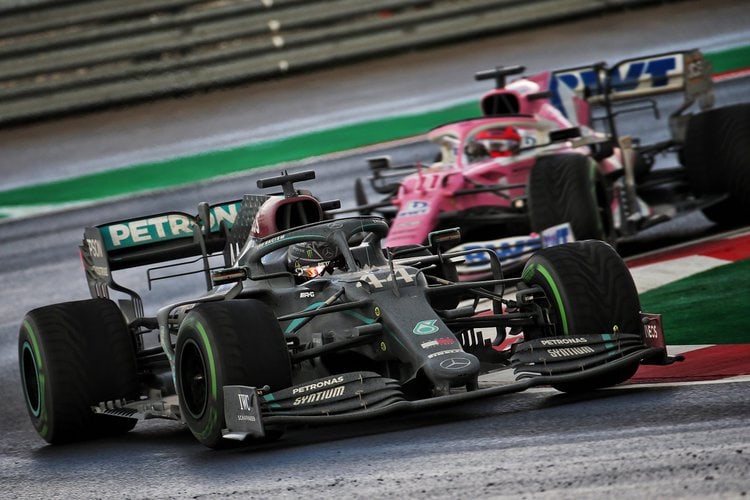 Mercedes’ Lewis Hamilton moments after taking the lead of the race from Racing Point’s Sergio Perez.

With Lance Stroll starting on pole position, the Canadian had a dream start by retaining his lead on the opening lap, while team-mate Sergio Perez moved into second.

The two ran in formation for some time, however Stroll’s race unravelled when he made a second stop for Inters on lap 36.

Stroll dropped down the order as he suffered on the tyres which started to grain almost immediately and crossed the line in ninth place, taking just two Championship points.

Team-mate Perez enjoyed a much stronger result, taking his first podium result since the 2018 Azerbaijan Grand Prix. The Mexican also made just one single pit stop in the race, but couldn’t match Hamilton’s pace in the second stage of the grand prix. Racing Point’s Lance Stroll fires into the lead at the start of the Turkish Grand Prix.

Ferrari back on the podium

After a difficult qualifying result for Ferrari who failed to progress into Q3, Sebastian Vettel took his first podium of the year with a last-gasp overtake on team-mate Charles Leclerc.

Leclerc was engaged in a battle with Perez on the last lap which allowed Vettel, who was running in the top three earlier in the race, to close in. As Leclerc ran wide with three laps to go after overtaking Perez, the Monegasque driver slipped down to P4, with Perez and Vettel making their way past.

Carlos Sainz also almost found his way past his 2021 Ferrari team-mate, however the Spaniard was forced to settle for fifth place. 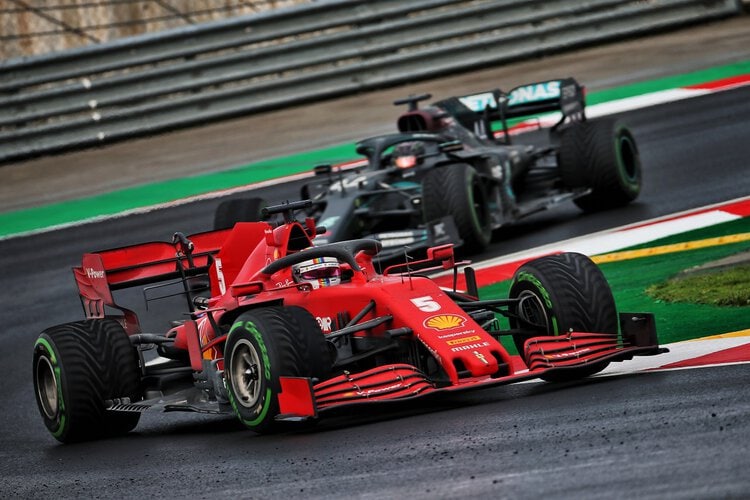 Both Max Verstappen and Alexander Albon looked to be in a good chance at different stages to claim the race win, however a series of spins sent both out of contention, crossing the line in sixth and seventh respectively.

While Hamilton revelled in the joy of his Championship, it was a tough outing for team-mate Valtteri Bottas, who spun around in the tricky conditions multiple times. The Finn crossed the line in 14th, matching his lowest classified finishing position with Mercedes.

Lando Norris was eighth for McLaren after a late-race overtake on Stroll, while Daniel Ricciardo bagged the final point on offer, losing out in a battle with Norris late-on that saw him spin.

Both Haas’, as well as Nicholas Latifi and Antonio Giovinazzi, retired from the grand prix for mechanical reasons.