Skip to content
Lewis has had to show years of dedication to win seven world titles
It must be pretty easy being Lewis Hamilton. You drive the fastest car, get paid millions to do so and jet around the world winning races willy-nilly. I mean, is F1 even a real sport? That’s just some of the kinder criticism that you get if you’re a seven-time world champion in Formula One. So, let’s break it down, how hard does Lewis Hamilton have to work to be the sporting and global superstar that he has become?

Is F1 just about being in the fastest car?

Of course being in the fastest car is always going to give you an advantage but to get a chance to be in that car you have to prove yourself on every level and make the move to the right team at the right time and that is not easy to do.

Lewis did it masterfully in 2013 when he left McLaren to head to the relatively unsuccessful Mercedes team, replacing the great Michael Schumacher.

“I was told by everyone around me to stay put at McLaren…even my dad said ‘stay’,” Lewis admitted earlier this year. “We won our World Championship early in the second year, but we continued to face every single year the same as the first year since I joined in 2013. Whatever decisions I take, I will have to deal with the consequences moving forwards, but that’s my choice. I think that is really important, for people to be themselves and do what suits you.”

Part of the skill of being a world champion is managing your career and seeing opportunities. Other drivers have tried it less successfully, but Hamilton has made sure he is in the right place at the right time.

Driving in F1 is tough. Not only is there the clear risk to your life and well-being – driving at over 200mph in a carbon fibre shell – the physicality of it cannot be underplayed. You can’t be too big because muscle slows you down, so you have to train in a very tailored way, and Lewis Hamilton is one of the fittest drivers to ever take to an F1 track. He trains up to four hours a day and has recently switched to a plant-based diet which he says has had a remarkable effect on his energy levels, in his own words it has “frickin’ changed my life”. 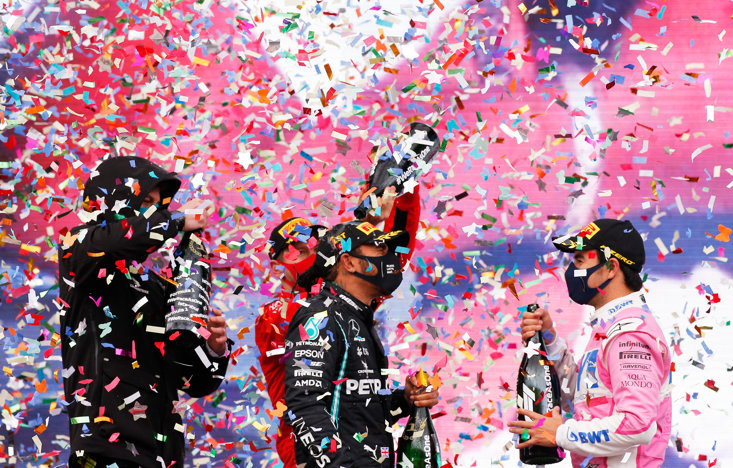 “I’m physically in better shape than I’ve ever been, and I’m more successful than ever right now, and my plant-based programme has played such a big role in that,” he adds.

“Over the course of a two-hour race, you might have an average heartbeat of 160-170bpm. During qualifying, it can go up to 190bpm. That’s why I do a lot of running. Sprints are a part of every workout.”

And what about age? He is an elder statesman in Formula One now but that doesn’t seem to be slowing him down. “I’ve honestly never felt better. I’m 35 now, and though theoretically I should be less fit than before, I’m more mobile and in better shape than I was at 25.

“I just want to be at the top of my game in a physical sense, just as I want my car to be the best in terms of engineering. How can I make sure I’m ahead of everyone else? How can I be more consistent, meticulous and precise? How can I better understand the technology? That’s what I focus on.”

It is that attention to detail and his hunger to learn that has seen him become a seven-time world champion. Lockdown for most people was a challenging time but Lewis used it to his advantage.

“I would say that the Covid lockdown – after we had the first part of the season cancelled… it was negative in many, many ways but in some ways it gave a lot of life, a lot of energy to focus on some other things… That bit of time off was really a bit of breathing space. It’s kind of given me a renewed bit of energy to go longer. I want to be able to perform at the level I’m performing at now, forever.”

During lockdown Lewis also shifted from having an interest in world affairs and environmental issues to becoming a campaigner and activist. He spent a day on a Black Lives Matter march in London and since then has made Formula One look to increase diversity and inclusion. At the start of every race he takes a knee, along with other drivers who all wear ‘Stop Racism’ T-Shirts.

Hamilton has a lot of sway in the paddock after 14 years. It was shortly after his comments at a packed press conference in Australia in March this year that the race was called off.

“I’m very, very surprised we’re here. I think it’s great we have races but it’s shocking we’re all in this room.”

When Hamilton was asked why he thought the race was still due to take place, he said, “Cash is king,” before the hasty addition of “I honestly don’t know.”

“There’s no ‘I’ in the word team and that makes him clearly stand out. When I look around there are many drivers who clearly think that they are the sun and all of the planets revolve around them and this is a big, big misconception and is an ingredient for failure.”

And on Hamilton’s dominance of the sport? 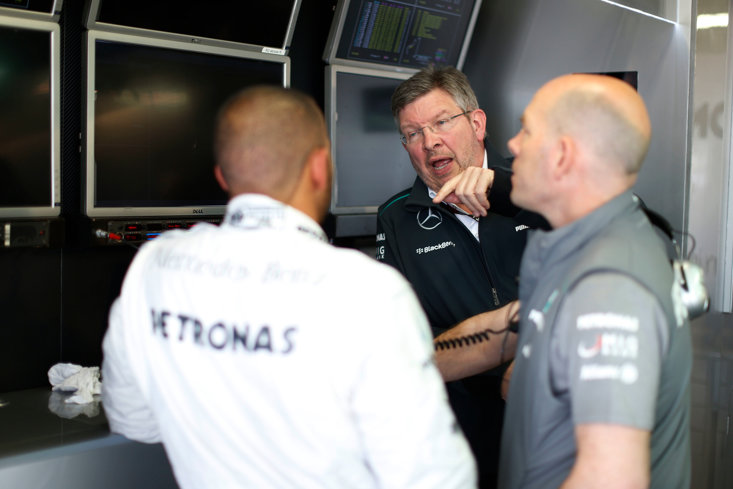 F1 has always been dominated by the best drivers. This is nothing new. Ross Brawn is now the Managing Director of F1 but in his time in the sport he has worked with both Michael Schumacher and Lewis Hamilton. “It’s the kind of dominance that in most people’s motorsport career, you only see once,” says Brawn. “I’ve been blessed to see it twice. I have been fortunate to work with both Lewis and Michael. They are different characters, which is wonderful as you don’t want metronomic characters in F1. Lewis is different to Michael in the way they approach things. At the core of it, they both have a God-given talent.”

So, what next for Lewis and his God-given talent?

“My goal is to continue to deliver as long as I can. So, I do see myself going for at least three years.”

For anyone wishing Hamilton would step away from the sport and hang up his helmet, don’t expect that to happen any time soon. What Hamilton has achieved is quite incredible. But what he goes on to achieve in the future, I have a feeling, will be more spectacular and on a far larger scale than anything we have seen so far.