Michele Mouton, president of the FIA’s Women and Motorsport Commission (WMC), is championing the next generation of female motorsport professionals through the FIA’s Girls On Track – Karting Challenge. The WMC creates a safe space and culture that allows women to participate in all aspects, on all levels of motorsport.

The FIA (International Automobile Federation) initially was formed to provide coherent governance and safety to motorsports. Over the past century, the FIA has become a global organization that ensures safe, sustainable and accessible mobility for all road users across the world. In 2009, the WMC was voted through at the World Motorsport Council of the FIA. Then in 2010, Mouton became the first president of the WMC

The Girls On Track program had a soft launch in 2018. It was a competition model for the promotion and development of young women in motorsport at the grassroots level. With its success, the program has continued through 2019 with the addition of Susie Wolff’s foundation, Dare To Be Different. This hands-on program takes the young girls through stations that offer media training, on-road safety lessons and scenarios, simulators of driving Formula-E cars on the track and a chance to get behind the wheel of a kart.

“Over 1,000 girls have been invited everywhere,” Mouton explains. “They now have this experience of two years of competition. I hope they will continue and we will be able to support them in the future. This was a very challenging program. Susie Wolff was doing Dare To Be Different, and she is also an ambassador for the commission. So, we decided to join our programs together to be able to work with girls from ages eight-to-eighteen. Now, we have a complete full package, and we include in the STEM activity, we include the kart race, and it makes a complete package where they can have the vision of what is motorsport.”

Mouton started out as a motorsport driver; she was the first French female professional driver. “I was a professional rally driver,” she smiles. “A friend of mine was doing a rally and was looking for a co-driver. I did two or three rallies with him. My father knew I liked to drive, and he didn’t like to see me in the co-driver seat. He said, ‘Okay, I know you like to drive. I would prefer to see you driving. I will buy you a car, but I will pay for one year. If you are good, you continue. If you are not good, you stop. He was my first sponsor.”

Over the course of her driving career, Mouton had four wins the World Rally Championships. In 1982, she was the runner-up in the driver’s World Champion. “I was considered as the only woman to win in WRC rallies,” she states. “So, after that, I stopped.” Mouton had met Jean Todt, president of the FIA, while she was driving; he was the team manager. “When Jean was elected president,” she continues, “he first asked me to be president of the Women and Motorsport Commission. So, I ended up on the other side of the Federation.” Mouton has been working with the commission for the last 10-years promoting and encouraging more women to participate in motorsports.

Mouton credits two big pivotal moments within her career that set her on this trajectory. The first being when she was asked to race professionally in the world championship and the second was her first win in 1981 at Rallye Sanremo. “That win was really essential,” Mouton comments, “because if you can win once, in your mind, you think that you can win more. So, it was really a very strong moment for me. Not as publicity, I would say, but more for me mentally for going even faster.” 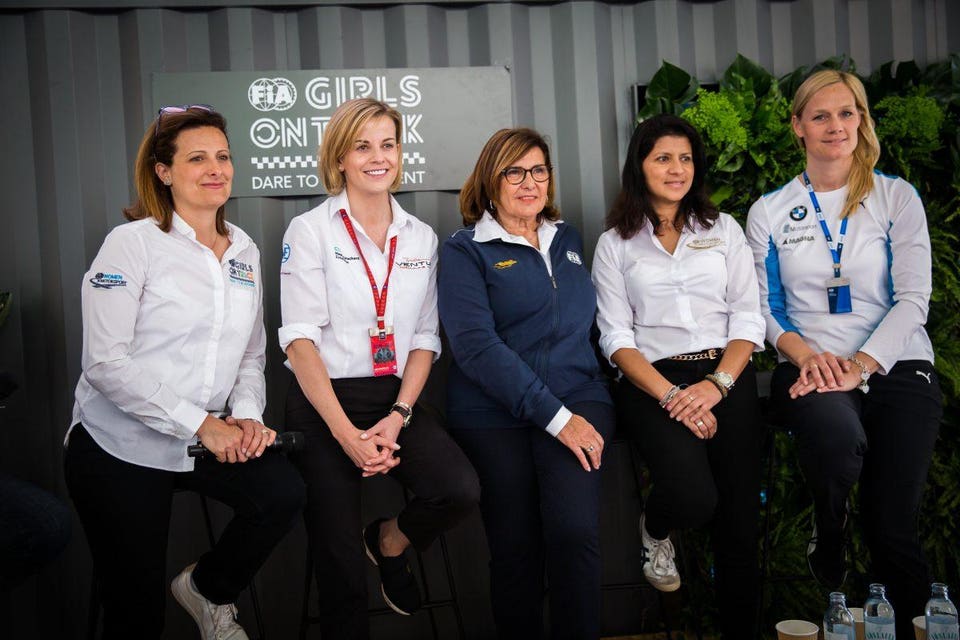 FIA Girls on Track – Dare To Be Different panel discussion in Berlin.

Throughout all of Mouton’s career transitions, she’s focused on the following steps:

“The only pressure I had was to try to reach the level of the top drivers,” Mouton concludes. “This was my goal. I didn’t realize that it could be inspiring…You are focused on what you do, and not at what you represent for the others because you are in the mode of action, not in the mode of thinking.”