Cooling problems were present from the outset, as were significant transmission issues that worsened the longer the car ran and the hotter the hydraulic fluid became. Turning in to a corner towards the end of a long stage on a hot rally was always something of an adventure in terms of which axle the power would be delivered to.

And then there was the team behind the motor, Ove Andersson’s Toyota Team Europe. Few doubted the ability behind TTE’s doors, but the team was ill-equipped and short on experience when it came to taking on the might of Lancia across a full season.

Fast forward 30 years and the world’s biggest car maker is back – with a car that suffered overheating issues and transmission concerns. The accusation of being ill-equipped was levelled at Tommi Makinen Racing time and again ahead of launch of the Yaris WRC in 2017. 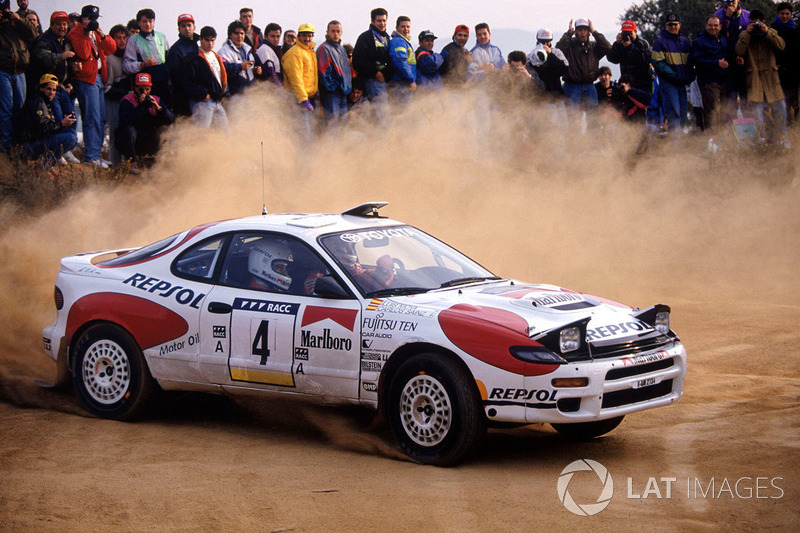 Andersson moved Toyota forward into the ’90s with the Celica Turbo 4WD and won titles with three drivers’ (Sainz in 1992, Juha Kankkunen in ’93 and Didier Auriol in ’94) and successive makes’ crowns in ’93 and ’94. Toyota grew into a dominant force with an outstanding roster of drivers, inventive engineers and a spectacular resource from the mothership.

History, it appears, is about to repeat itself.

For Auriol, Kankkunen, Markku Alen and Hannu Mikkola in 1993, read Ott Tanak, Jari-Matti Latvala and Kris Meeke in 2019. Those three all have plenty of experience and massive speed.

And, just as the rest of the world feared what Toyota had to bring in the early ’90s, their contemporaries – led by six-time world champion Sebastien Ogier – are apprehensive about the year ahead against the Yaris.

“Ott was strong in the last part of the season, by number I would rate him number one,” says Ogier. “Toyota is going to be strong.”

Beyond the drivers and a healthy budget, where else will the Yaris WRC’s speed come from? Toyota’s chief engineer Tom Fowler explains. 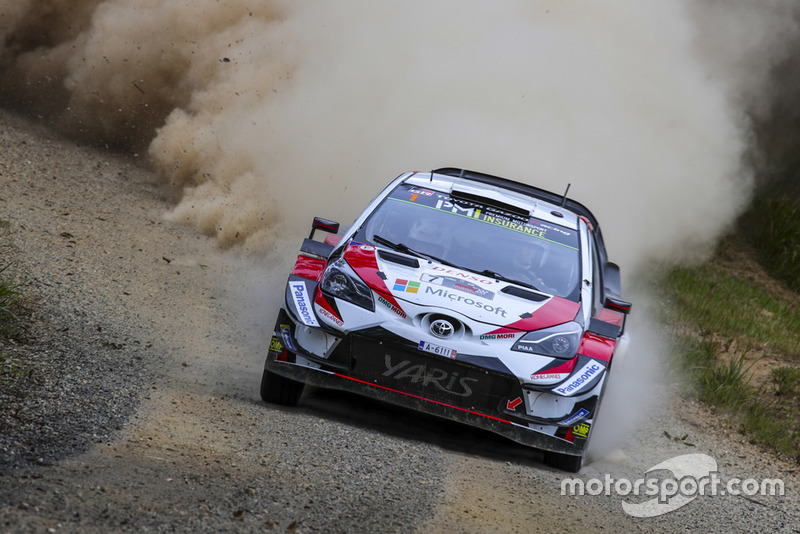 This is where homologation jokers will come into play, as Toyota looks to source more traction and driveability from revised front, centre and rear differentials.

“We’ve been working on the ramps in the diffs since 2017, but now we’re more on the internals in the front and centre. This is aimed at improving the driveability of the car and helping with the way we put the torque down onto the road.

“This is aimed more at the gravel events, but it’s possible we will be able to learn more from this for asphalt.” 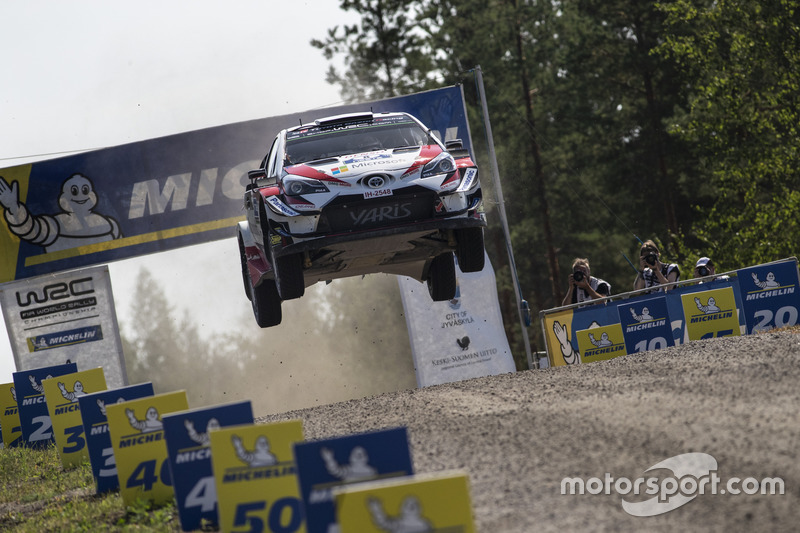 When the Yaris first turned a wheel in competition almost two years ago, rivals immediately noticed the strength of the engine – especially the power output. Engine development is completed by Toyota Motorsport in Cologne and the fruits of those ongoing labours were seen in Finland last season, when TMG delivered an upgrade in time for Tanak to win in Jyvaskyla.

The combination of engine and transmission is where Toyota will score well this year – with improvements to both offering more feedback and confidence to the drivers. The engine now gives more torque than ever, allowing the drivers to use the motor to pull themselves out of trouble, especially in tricky conditions where grip is compromised. 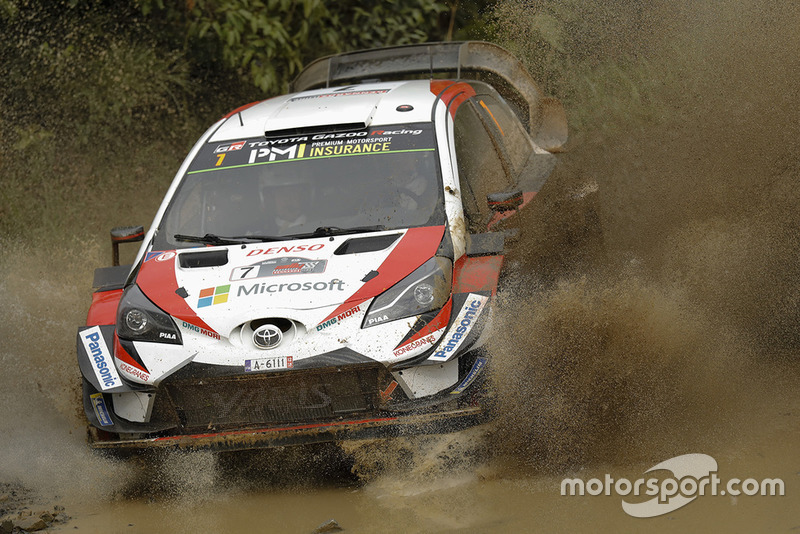 Plenty was made of Toyota’s fragile front end this season, with radiator and engine damage ruling out of plenty of points. It’s these issues boss Tommi Makinen is talking about when he speaks of the need for more consistency.

Despite those issues, when it came to the really tough test – Turkey – Tanak recorded another win. Fowler admits, however, that Toyota’s rough rally pace needs significant attention.

“If you ask me which rally I was most disappointed with last year in terms of performance, I’d have to say Turkey,” says Fowler. “OK, we won, but we weren’t there in terms of pace.

“Everybody broke their suspension except us – maybe you could say we were quite fortunate that we didn’t hit any of the bigger rocks. But look at the first day and we were sixth, without the other cars having problems and some mistakes we might have stayed there.

“We’ve seen this as a trend last year, in the rougher sections of stages, when we’re down to bedrock, then they’re tough for us. In Turkey we traded protection for performance and we knew when we started that rally out outright speed wasn’t there.

“We’ve worked hard to pick up traction in the slower, looser sections and that was one of the car’s big gains last year – but that’s come to the detriment of protection in the suspension, which meant we couldn’t carry the speed through the rough places. We need to work on this, we need some time testing on rough gravel – trouble is, there aren’t many rallies where you need that.

“It means devoting time to a set-up and car fairly specific to one rally. Generally, rallies are getting easier on the cars which has meant more of a focus on performance.” 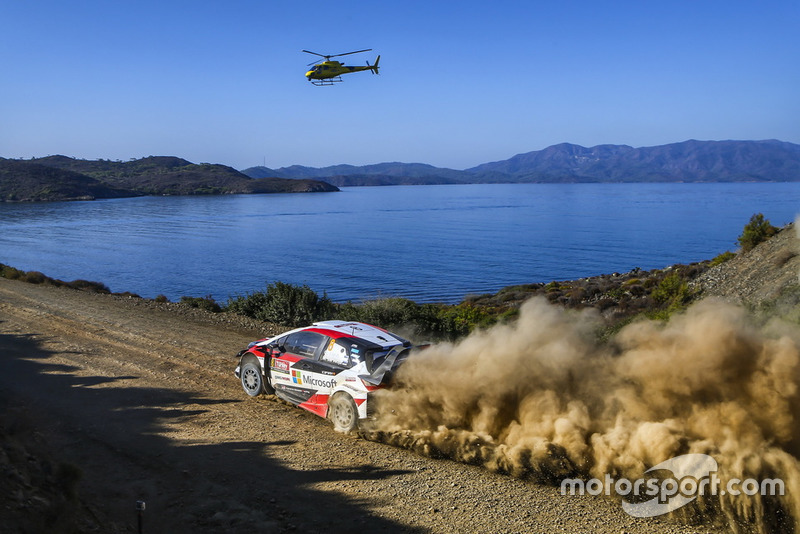 Chassis and suspension development is ongoing, and Toyota and its drivers are known to be far happier with the feel and feedback from the Yaris than they were 12 months ago.

The only visible change to the outside of the car for 2019 is expected to come around the front of the rear wheel arch, which will have a minor aero tweak to help the natural airflow for cooling.

There’s a feeling the car could still shed some weight, but otherwise it’s getting close to the optimum current specification World Rally Car.

Toyota’s other strength is undoubtedly the support from the parent manufacturer in Japan. Toyota chairman and CEO Akio Toyoda is a personal supporter of Makinen’s work and is regularly seen on events cheering on the Yaris WRCs. That support is reflected in the budget, with Toyota the best-resourced squad in the service park.