Skip to content
The sixth round of the 2017 Inland Championship will play off at the Zwartkops Raceway in Pretoria for the second time this year on 29 July 2017. The racing is expected to be explosive and closer than ever as the championships in the various racing categories heat up.

After a long break between races, the enthusiastic Bridgestone Club Racing Series drivers are itching to get back on the track and thrill the crowds in this popular one-make series. With only four rounds to go, the championship race for the overall title and class honours is starting to get interesting. Just 27 points separate the top ten in the overall title chase, with 20 points on offer at this round.

Class A will see current class leader Julian Fameliaris (Tower Crane Services/Lube-Net – BMW E36 328i Turbo) doing his best to hold off the hard-charging Lorenzo Gualtieri (Savspeed/Powermods/L&R Auto Electric – BMW E36 328i Turbo). The pair had a proper ding-dong battle at Midvaal with less than 0.07 seconds between them on race pace. Dino Fameliaris (C-Tech/Afrivalve – BMW E36 M3 Turbo) makes a welcome return while Stefano Martinelli (Dalucon Insulated Panels – BMW E36 328i Turbo) has not confirmed his participation following damage sustained in the previous round.

Class B is starting to look a bit like a one-man show, with Paulo Loureiro (Combined Racing/J&K Customs/CCP/CPW – BMW E36 M3 GTS) having taken four consecutive overall victories. Viking Racing’s ace Riaan Woest (BMW E46 M3 GTR) is not taking it lying down, neither is older brother Rick Loureiro (Combined Racing/CPW – BMW E30 3,2 CSL ) who have their sights firmly set on the dubbed ‘Ballistic Banana’ of Loureiro. The dark horse that could possibly disrupt all their aspirations will come in the form of season newcomer Jason Page (ELB Construction/Triplicon Construction – BMW E36 328i Turbo).

Class C will as always be a hotly contested affair. The class boasts seven different race winners over five rounds of racing, with more class newcomers equally capable of crossing the line first. Class leader Philip Smit (Hi-Q – BMW E46 M3) will have his hands and mirrors full of Willie Erasmus (Speed & Sound/Big Boss Auto/Liqui Moly – BMW E36 M3). Added to the mix will be Andreas Meier (BMW E36 M3), Len-Henry Gobey (Lesavert – BMW E36 M3), Mike Grobler (Mayfair Gearbox – BMW E46 M3) and Shane Grobler (Mayfair Gearbox – BMW E36 328i). Tyrone Dawson (BMW E36 M3) and the returning Craig Ball (Rock Solid Industries – BMW E36 328i) will also want to challenge for podium honours. More than a few of these drivers also have the potential to break out into Class B which will see an interesting scenario play out of whether to fight for the win or manage performance. We hope for the former.

Class D has battled for entries of late, and with the absence of Jan Eversteyn (Mammoet Racing – BMW E36 328i) at the previous round allowed the rest of the pack to catch up. At the top of the challengers’ list will be Alan Hilligenn (BMW E36 328i) and Jimmy Tsimenoglou (Big Boss Auto/SA Safe Equipment – BMW E36 328i), keen to prove they have what it takes to win. They will, however, need to beat out Oz Biagioni (Bio Pool Maintenance – BMW E46 M3) and Troy Cochran (Arrow Automotive – BMW E46 325ti) if they want to keep their championship chances alive. 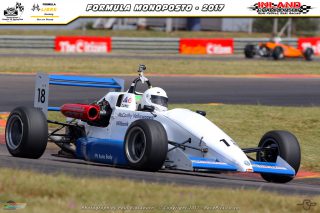 After an exciting race meeting at Phakisa recently, the Formula Monoposto brigade will be out to build on the popularity gained at this event. Nicolas Zavallone made a welcome return in his beautifully prepared Speads RM08 at Phakisa and will most definitely attract a lot of attention at Zwartkops. He is expected to face strong competition from the likes of John Maurien (VW Ray), Carel van Heerden (GTi Swift) and Sean Harrington (Ray Formula GTi). Hot on their heels Johan Botha (Mygale SJ99), is expected to duel with the likes of Austin Zungu (Formula M) and the Abacus Divisions Racing’s Geldenhuys family trio.

The Midvaal Historic Car Club has cemented their popularity as one of the guaranteed exciting races in this tour on the day. This will be no different this coming weekend at Zwartkops.

Leading the challenge out front in class A will be Eugene Gouws in the Firenza Can Am. After achieving great success in the previous round at Midvaal, Seef Fourie Snr (Datsun 160Y) will be looking at capitalising on those results in the class D battle and reaffirm his strong challenge against Gouws on the day. Shawn Smidt (Datsun 160Y) will be hoping his mechanical nightmares are at an end as he too has the ability to challenge Fourie and Gouws out front. After a spate of mechanical issues in a car still under development, Andre de Lange (VW Jetta MK 1) will also be hoping to be part of the action out front. 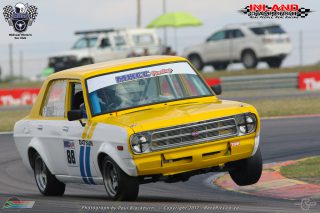 The Phakisa round caused a shift in the class E battle with Johan Coetzer Snr (Datsun GX) taking the lead in class on points. But it would be Brendon Parker (Datsun GX Coupe) taking full advantage in the round after at Midvaal taking full points and narrowing the gap to Coetzer Snr. With Ken Price (Datsun GX Coupe) unfortunately missing out on the Midvaal round he will have his work cut out for him to remain in the championship battle. With Johan Coetzer Jnr (Datsun GX) also coming away with good results he will be hoping to narrow the gap to his father yet ensure a comfortable margin to Price. They will all, however, have to contend with competent competitors such as Rene van Rensburg (Ford Escort Mk2), Johan Prins (Datsun 160Y), Jackie Morrison (Ford Escort) and Deon van Vuuren (Ford MK1) that can certainly take an outright win ahead of them all.

The class F battle has to date delivered some of the most entertaining and door-to-door racing action out on track. It is hard not to notice the wheel cocking Jensen brigade in their Datsun 1200 GX’s. The onslaught on the day is expected to be led by class leader Franz Jensen and his sons, Peder and Travis Jensen. After missing out on the Midvaal round, giving his studies preference, Peder has slipped down the championship scoreboard and should be back with inspired intent. But it will by no means be easy as their aspiration will be met with a stiff challenge from the likes of Frank Davis (Ford Escort) who also came away from Midvaal with maximum points. Then there is the returning Paddy Venske (Toyota Corolla) that always deliver good results at Zwartkops. Teammate of the Jensens, Gavin Lundin (Datsun GX 1200) who missed out on the Phakisa round will also want to be part of the action and grab as many points on offer as possible.

The class G battle will see current championship and class leader Anton Vos (Datsun GX Coupe) having to defend for all his worth against a titanic onslaught from his teammates, Henry Vos (Datsun GX) and Carel Vos (Ford Escort). If that is not enough the pressure from the likes of Johan Roets (Datsun SSS), and Johan Swanepoel (Alfa Berlina) will also be something to contend with. Johan Venter (VW Jetta) lying in third overall of the championship will head up the class H battle. He will however not have it easy as Danie du Plessis (Ford Anglia) will be out for as many points as possible after missing a few rounds on this tour already. 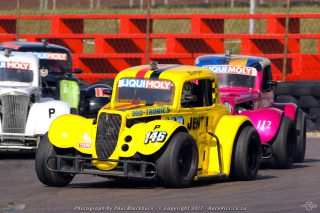 The INEX Legends will also be back. After a brace of victories at Phakisa earlier this month, Richard Upton remains the man to beat, but after mounting the top step of the podium in heat 1 in the Goldfields after a lengthy absence, Anro Stadler must also fancy his chances of stealing Upton’s thunder. Jordan Larsson may also have something to say about outright victory following a good outing at Phakisa, in which he scored two third places. Altan Bouw and Willie Erasmus are another two ever present threats in the INEX Legends ranks, and cannot be ignored in the fight for top honours.

Stalwarts Richard van Heerde, Charl Roux, his brother Gerhard and the Nel siblings, Shjael and Shaun, may also spoil the party for the regular winners and have looked solid all year fighting it out in midfield.

Anton Repsold has put Johan Jooste’s golden brown machine to good use this year and was a revelation at Zwartkops on the first visit earlier this year. A repeat performance could be on the cards. Johan van der Venter, Steven Levin, Ian Upton, Marnus du Plessis and Steve Nel are all looking to throw the cat amongst the pigeons, a strong possibility with the inverted grids in the tight confines of Peter du Toit’s playground.

This all-star cast in the colourful, nimble and fast midgets will again provide great entertainment as part of a full day’s programme. 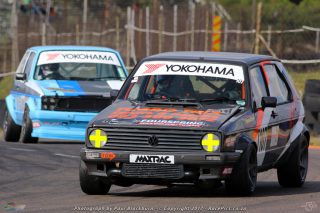 Yokohama Modified Production Car and Silvercup categories are expected to share the grid once again. Paul van Niekerk will be leading the challenge in his turbo VW Golf Mk 1. Jeff Langeveldt (Honda CRX) will have his hands full defending against Brian Peck in class A whereas Kenny Darroch (VW Golf Mk1) and Don Mackay (VW Golf Mk1) will duel for the class B honours.

Evert Seyffert (Chevrolet Ferenza) will be expected to lead the challenge in Silvercup and will have his hand full defending against the likes of Brent Henshaw (Toyota Celica). Freek Blignaut Snr made a welcome return at Midvaal in his Mazda 323. He will face a stiff challenge from his son, Freek Blignaut Jnr (Spaceframe Mazda 323) and Daniel Luwes (Honda Ballade).

The Big Boss Auto Super Saloons will also be putting in an impressive appearance with their fast rotary powered space frame cars.

The quick and nimble pocket rockets of the 250 Superkarts will also make a welcome return in this round. Another onslaught of the much sought-after sub-sixty second lap time is sure to be attempted. Expected to lead that challenge is Bevan Williams already with a 60.8-second lap time behind his name doing his best to better that time. He will be joined by prolific racer Sean Moore, Riccardo Tafani, Dayne Angel, Richo Napier, Mark Russell and Edward Cottrell.