Dean Harrison secured his third TT win and a first in the blue riband Senior event when he took victory in Friday’s six-lapper on the Isle of Man.

Harrison had finished second to Hickman in three previous races this week. 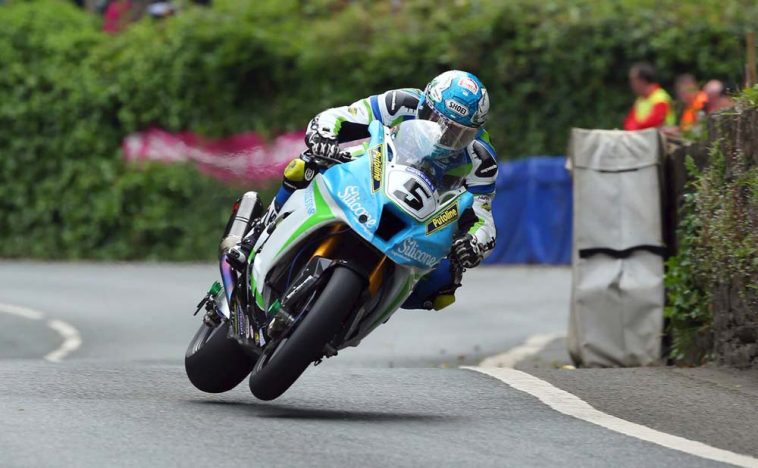 ‘Anything can happen here’

Lincolnshire rider Hickman looked on course for a four-timer at this year’s meeting when he built up a lead of 17.6 seconds by the end of lap four.

The Smiths Racing pilot, who had won the Superbike, Supersport race two and Superstock races, was very quick out of the blocks with an opening circuit of 134.284mph, the fastest of the race.

Harrison trailed by two seconds after lap one, by eight after lap two and was 12 seconds adrift at the conclusion of the third lap as Hickman looked to be easing to victory.

Hickman’s difficulties began to impact the leaderboard early on lap five however and Harrison pulled clear to run out a convincing winner.

“I kind of lost my momentum midweek but I started to get it back on Thursday when we ran all those races.

“To do it over a full distance – six laps with two pit-stops – makes it very special. Conditions were spot on and a special thanks to all the crowd. Without them on the hedges it wouldn’t be the same – they make the whole thing special,” added the Silicone Engineering Kawasaki rider.

Harrison’s previous triumphs came in the 2014 Supertwins race and the second Supersport outing 12 months ago – but he had been in danger of establishing a reputation as the TT’s ‘nearly man’ after accumulating nine second-place finishes before delivering Kawasaki’s first Senior TT win since 1975.

The Yorkshireman, now a regular competitor in British Superbikes, counts two Southern Solo Championship titles, plus two successes at the Ulster Grand Prix among his other career highlights.

A dejected Hickman said after the race: “The bike had been awesome but the temperature was going really high. We have had this water issue and we can’t work it out. It just makes no sense.

“I had to ride round at half throttle, it was hard work. They seemed to take forever the last two laps. All credit to Dean, he’s got the big bike win he was after.

“It’s swings and roundabouts, I’m happy to get another podium.”