MotoGP world champion Jorge Lorenzo won the Italian Grand Prix on Sunday after a last-lap battle with fellow Spaniard Marc Marquez that remained on a knife-edge until the final metres.The Yamaha rider powered past as the chequered flag beckoned to win by a mere 0.019 of a second after Honda’s Marquez had earlier seized the lead in a wheel-to-wheel duel between the two. 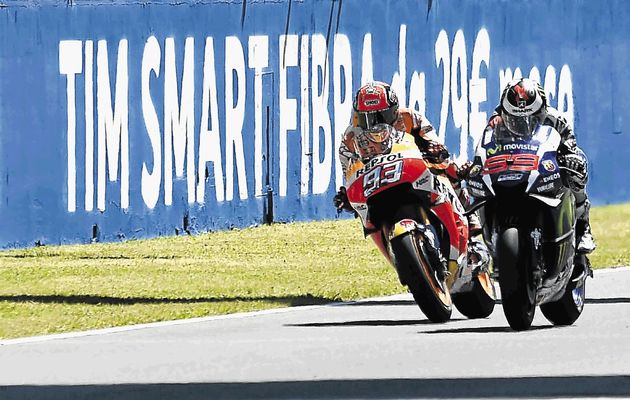 Italian great Valentino Rossi, Lorenzo’s team-mate, started from pole position at the Mugello circuit but retired on lap eight with smoke billowing out of his bike.

Ireland’s Eugene Laverty took 13th for Ducati and is 10th in the overall standings. Lorenzo, in his final season with Yamaha before replacing Iannone at Ducati, extended his championship lead over Marquez to 10 points.

“When he passed me on the last lap, I thought maybe I have to save the points,” said Lorenzo, who was second coming out of the final turn but used his bike’s acceleration to good effect on the straight.

He and Marquez had traded the lead four times on the lap, with Marquez appearing to make his final move stick, only for Lorenzo to surge back for his 43rd career MotoGP win and fifth at Mugello.

“I tried the inside, but Marquez closed the door very well, so the only chance was the straight. I thought ‘Jorge, you’ve lost the race’.

“My bike was very fast, I was recovering metres quickly, so finally I won the race unexpectedly,” added the Spaniard, who had started fifth but led after turn one with Rossi chasing behind.

Lorenzo had also suffered a failure in the warm-up, with a new engine fitted for the race.

Double world champion Marquez said Honda had been struggling all weekend for acceleration out of the final turn.

“I knew it would be very close,” he said. “The main target was a podium, but when I saw Valentino had a problem, this is when I saw that I was able to follow Lorenzo at the limit. I thought: ‘OK, I will try’.”

The two Spaniards were the riders the home crowd least wanted to see atop the podium in Rossi’s backyard, after clashes with the Italian last year, and some spectators began leaving before the end of the race.