The second edition of the California 8 Hours proved to be an exciting end to the 2018 Intercontinental GT Challenge. Only in the final minutes of the race on the Laguna Seca Raceway were the drivers’, manufacturers’ and Bronze drivers’ titles decided. In the end Audi claimed a third consecutive manufacturers’ crown, while third was enough to let Tristan Vautier become the new drivers’ champion. Although he did not have the easiest of races, Kenny Habul became the inaugural Bronze Drivers’ champion. 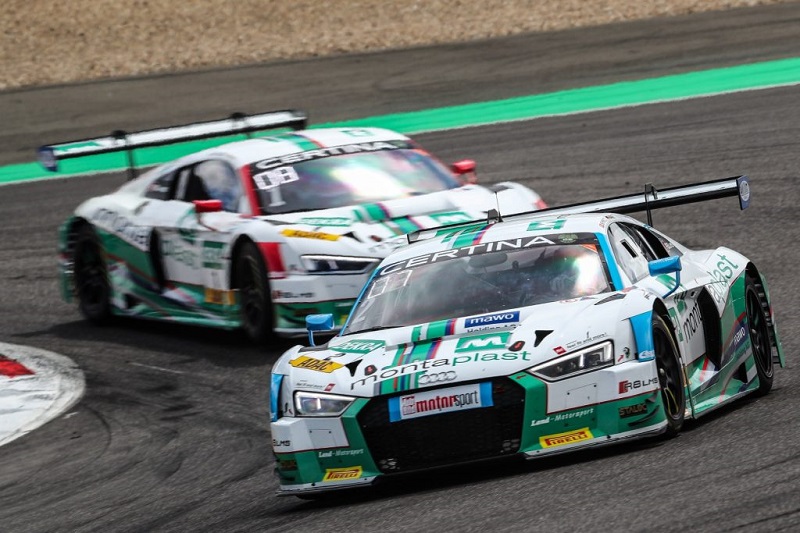 Sunny, but slightly chilly conditions met the competitors for the start on Sunday morning. Kelvin van der Linde, at the wheel of the pole-sitting No. 29 Audi Sport Team Land, held on to first place, even though Raffaele Marciello tried to pass him on the outside of the first corner. The No. 29 Audi and the No. 43 Mercedes-AMG Team Strakka Racing stayed close to each other for the first hour of the race, up until the moment that Marciello found his way past van der Linde.

The Strakka Racing machine remained among the frontrunners up until the sixth hour, when a safety car – caused by an off for the No. 2 GMG Racing Audi – cost the No. 43 Mercedes-AMG a lot of time and five positions, handing the lead of the race to Audi Sport Team Land. That car had lost plenty of time earlier in the race, due to two drive-through penalties. Thanks to an intelligent race strategy, Christopher Haase, Christopher Mies and last year’s California 8 Hours winner van der Linde fought their way back to the top.

With two hours to go Marciello switched on the afterburners, determined to reclaim a position which would give him the drivers’ title and Mercedes-AMG that of the manufacturers. However, contact with the No. 17 Audi Sport Team WRT car of Alex Riberas resulted in an impressive off. The airbox of the black-and-green Mercedes-AMG was filled with dust, together with the cockpit of Marciello’s car, hampering the Italian’s progress.

Once the final pit stops were over and done with, the 29 Audi Sport Team Land car had less than five seconds in hand over the No. 19 Audi WRT R8, but the latter never managed to close that gap.

“I am very happy to have won this race for a second time,” van der Linde said. “I must admit that we were a bit worried when we had to take the penalties, but thanks to an excellent strategy we managed to get back to the front. I would love to come back next year to try and win this race for a third time in a row.”

A quarter of a minute down the road the No. 175 Mercedes-AMG Team SunEnergy1 Racing car held on to third.

This was enough to give Vautier the 2018 Intercontinental GT Challenge drivers’ title, but insufficient for Mercedes-AMG to hold on to the lead in the manufacturers’ standings. Although Maro Engel (No. 175 Mercedes-AMG) tried his utmost to gain a couple of positions, the order remained the same until the end of the race, bringing the manufacturers’ title to Audi for the third year straight.

“It’s a bit bittersweet not to be able to share this title with Raffaele, for we have raced together all season,” Vautier said. “But I’ll take it, as they say. This is the result of a real team effort, from everybody at SunEnergy1 Racing, Mercedes-AMG, AKKA ASP and all the other people that I have raced with this year. It is also very cool that Kenny took the Bronze Drivers’ title. I am very happy for him.”

With Marciello dropping back in the dying minutes of the race – another contact caused a puncture – the No. 911 Wright Motorsport Porsche crossed the line in fourth. Frederic Makowiecki, Romain Dumas and Dirk Werner lost some time early on, but a strong finish meant they beat the No. 8 Bentley Team M-Sport Continental of Vincent Abril, Andy Soucek and Maxime Soulet in the battle for fourth. In the first half of the race the Continental had led the race thanks to a different strategy, but a puncture threw them out of contention.

The battle for the Bronze drivers’ title seemed over very quickly for championship leader Habul, after the Australian, at the wheel of the No. 75 SunEnergy1 Racing Mercedes-AMG, made contact with the No. 46 PPM Lamborghini. Both cars were towed back to pit lane, and when Habul’s car regained the track, it was over 80 laps down. With Habul needing 70 percent of the race distance to be classified and score points, it was clear that the Australian could not afford to lose more time. In the end, the car covered 71 percent of the winner’s race distance, enough for Habul to claim the very first Intercontinental GT Challenge Bronze Drivers’ title.

“I don’t think I have any fingernails left,” Habul said. “The tension in this race was enormous. We were unlucky to break the steering in the incident early on, otherwise we could have taken a top-five finish. But we’ve been lucky a couple of times this year as well. We’ll be back next year to defend this title!”

At the front of the Bronze Drivers’ race-in-the-race, Nick Leventis took his second maximum score of the season, sharing the No. 42 Strakka Racing Mercedes-AMG with David Fumanelli and Felipe Fraga. They held off the No. 54 Black Swan Racing Porsche of Tim Pappas and his co-drivers Jeroen Bleekemolen and Patrick Long. Leventis and his teammates also took the top step in the GT3 Pro-Am category.

The GT4 class was also decided in the final half an hour of the race, when the No. 12 Ian Lacy Racing Ginetta had to stop for fuel. Due to the small differences in the category, that meant that the Ginetta dropped to fourth. At the front the No. 66 TRG Porsche Cayman had a close fought duel with the No. 626 Rearden Racing Audi. In the end the latter – with David Roberts, Vesko Kozarov and Max Faulkner at the wheel – took the class win with under half a minute in hand.

The sole GTC car in the race, the No. 6 US RaceTronics Lamborghini Super Trofeo, tried to take the fight to some of the GT3 cars, eventually finishing a very credible 14th place overall. In TCR the fraternal duel between the Bryan Herta Autosport Hyundai cars was decided early in the race, when the No. 99 i30 lost a wheel. The car later had to retire, after making contact with the No. 87 Vital Speed Motorsports Ferrari, that was spun around at the Corkscrew.

With the 2018 Intercontinental GT Challenge now fully wrapped up, all attention now goes to the opening race of the 2019 edition, the Liqui-Moly Bathurst 12 Hour on February 2-3, 2019.