A breezy and bright Killarney Kart track had a trick up its sleeve as it greeted the Western Province karting community for the local regional championship finale on Saturday. The completely resurfaced circuit was new to the entire field and while it bedded in a little as the weekend wore on, it challenged competitors to find anything close to reasonable pace, with lap times two-to-three seconds off their usual pace for this time of the year. 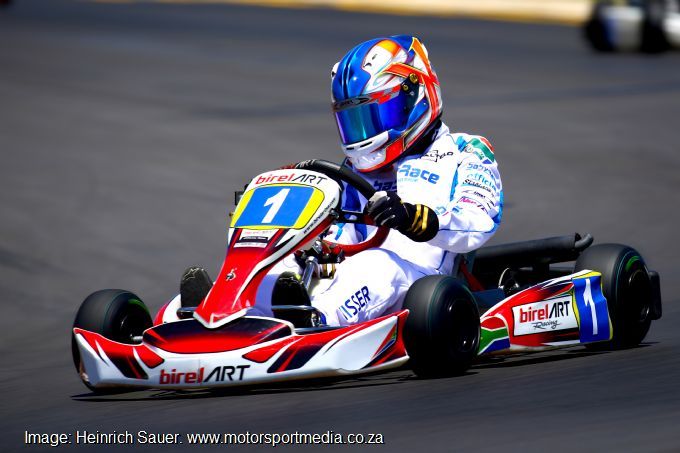 That did not prevent Umpie Swart from clinching the WP DD2 title with a two-race-to-one victory over CRG teammate Jason Coetzee, who also ran in second in the title race. Third was a surprise, as Ricky Perdigao returned to the track for the first time in several seasons to deliver a most impressive display en route to Masters victory for the day ahead of Jonathan Thomas and Masters regulars Jacques De Bruyn, Conor Hughes and Ernst Viljoen.
Umpie Swart made a surprise appearance in Senior Max, following Jason Coetzee home in the opening race before winning the second and third heats as Coetzee cruised home to the title in second. Storm Lanfear ended up third from Tristan De Nobrega and Andrew Thomas after Dario Busi hit trouble in the finale after impressing on his karting return with a couple of thirds in the opening rounds, and Johan Hamman.
Troy Dolinschek and Charl Visser shared out the high school Junior Max wins as Dolinschek took the second and third races, but neither were able to stop the absent Joseph Oelz from clinching the title from Dolinschek. Tate Bishop and Kai van Zijl were third and fourth on the day and in the title race, while Storm Lanfear and Mikaeel Moolla closed off the top six on the day.
The under-13 classes were all about one lad as Kyle Visser took the Mini Max title with a couple of wins and a second, while cruising home in fifth to clinch the Mini Rok title to make it a triple championship for the year over and above his SA Mini Max title. Mikhail Fernandez took the final Mini Max heat to end up second for the day ahead of Andre and Kyle Le Riche, Troy Snyman and a troubled Joaquin de Oliveira.
Lucas Royston took a clean sweep of Mini Rok wins as Paul Malcolm and Jason Macbeath shared out the seconds ahead of Reese Koorzen, but none of that would stop Kyle Visser from claiming his third Mini title of the year. Joaquin de Oliveira was next up from Ethan Stier, Conner Rensberg, Joshua Smit and Valentino Hoffman.
Reese Koorzen took the under-11 Micro Max wins for the day, but all Reza Levy needed to do was to follow Koorzen home to take the title, which is exactly what he did. Joshua Smit ended up third from Ethan Stier, Paul Malcolm and Valentino Hoffman, while newly crowned 2018 under-8 WP Bambino champion Ian Joubert dominated the karting nursery class ahead of Luan Mostert, Rayan Karriem, Eric Norman and Matthew Smit.
With the exception of SA champion Visser brothers Charl and Kyle, who now travel to Brazil to represent South Africa in the respective Rotax Junior and Mini Max World Finals, the Cape karting family can now stretch back and relax before the new season starts early next year and the fights start all over again for the 2019 WP karting titles.