SOME SAID that now they knew where the tough spots were they knew how to get around them so perhaps today might be easier. Nope. Three cars finished the 3rd lap and only one made it around the 4th… 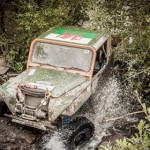 With only 4km done yesterday America’s Levi Shirley hoped to do a lot more today to get some testing done. Nope. After not being able to understand the Maxxis girl at the start line as she counted down the seconds it didn’t get much better. He and Off-Road Armoury stable-mate Rob Butler ran together… until a mud pit almost claimed his car. It was tilted over but the side of the roof was starting to go under… “I didn’t get so far but actually I learned a lot,” said a slightly dejected Levi. “But after this I am not scared of Welsh mud anymore!”

Their electrician / mechanic Adrian summed up the experience pretty well. “A few days ago we had the cars on the scales measuring corner weights to get it perfectly balanced. Then we ordered PAC springs from America and got them over on 24 hour express shipping so that we would have a car that handled well like an ULTRA4 should… and then a couple of km into the stage it was covered in 100kg of mud!”

Covered with 100Kg of mud

Starting 2nd today after two strong runs yesterday were the WSR team from France and all they wanted was a steady run to keep their position. Nope. “The winch is OK for a few metres,” said Nicolas Monteador. “But not for 20km. We killed the battery and Axel Burmann stopped and helped us for 20 minutes to get out.”

Axel himself broke his winch and was out of time to be able to get back, fix the car and get out for the second run. When he got into the pits the bonnet of his Bruiser was covered in about 15cm of mud. “We will see you in Italy,” he smiled.

Jaap was one of the ones to finish the 3rd lap but not the one who got out of the 4th. His winch broke and so his friend Hendrik de Nijs went back into the stage to get him. “Deep,” he said. “The wheels were under the mud.” He runs with 44inch tyres. That’s how deep it was.

One of the top British teams are Wrex racing and Dan Elias was quite happy with his weekend. “It’s a completely new truck so from every problem we had we learned something. At the first CP were had the same time as Jim so we know that the car is fast and this was a cracking event, so we just have to find the weak points and fix them.” Yesterday the front prop shaft failed, today it was a snapped bracket on the steering. Just little things,” he said. “I will take a lot of positives from this race!”

King of the Mountains Italy

There was only one team who did well on all four laps, only one to finish the last stage, and that was Team Gigglepin. I asked co-driver Mark Birch how he felt. “Tired,” he said, with a muddy-faced smile. “But it feels great that the brand new car works as good as it does. We were disappointed not to get the car ready for the Croatia Trophy but this is a vindication of all the work and effort we put in to building it.”
“And also that the quality of the field is amazing,” added Jim Marsden. “There are so many quality teams here and that we did so well, yep, feels great. I just hope that King of the Mountains in Italy will be full of mud and swamps!”

2nd place went to the monster Fire Ant team of Jaap Betsema and the WSR team got 3rd.

The next ULTRA4 Europe race is in Italy on the 20th and 21st of June. World 4×4 magazine will be there!

Results are on the King of the Glens website.