Both Lewis Hamilton and Valtteri Bottas retired in the Austrian Grand Prix on Sunday, which was won by Red Bull’s Max Verstappen, as Sebastian Vettel took a one-point lead in the championship.

Hamilton slipped past pole-sitter Bottas in the first corner in an eventful start that also saw Raikkonen then nearly snatch second from the Mercedes driver after the opening lap.

Having lost the lead things went from bad to worse for Bottas as his gearbox failed and he had to retire.

While most teams pitted early during the virtual safety car due to debris on the track Mercedes didn’t bring Hamilton in and when he pitted Red Bull took the lead of the race with Verstappen and Daniel Riciardo leading a one-two. 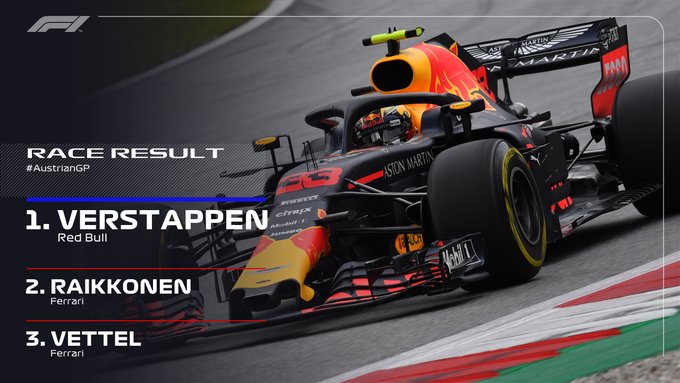 However, Ricciardo had problems and he was overtaken by the impressive Kimi Raikkonen, and eventually the birthday boy had to retire with gear issues.

At this stage Hamilton was brilliantly passed by Vettel and the Mercedes had to pit again.

Hamilton was rightly fuming on the radio at this stage as chief strategist James Vowles took complete ownership of the error saying on radio: “This is James, I have thrown away the win today. Passing is possible. I’m sorry.”

However the drama wasn’t done as Hamilton totally lost to power, confirming a double retirement for Mercedes on a disastrous day for the constructor.The final five laps were all about the two Ferrari’s chasing the leading Red Bull.

However, they couldn’t catch Verstappen as the Dutchman gave Red Bull their first victory at their home circuit and his fourth victory.