(CNN)Female models will back on the grid at this weekend’s Monaco Grand Prix, though they won’t be holding placards displaying driver numbers.Instead they will be taking pictures and displaying messages on social media for a luxury watch brand.

Formula One’s new owners Liberty Media had previously said “grid girls” were “clearly at odds with modern day societal norms,” ending a practice that had been a staple of the sport for decades, though Lewis Hamilton and Sebastian Vettel offered a different slant.
“I think women are the most beautiful thing in the world,” Hamilton told reporters Wednesday, after organizers confirmed TAG Heuer would continue its longstanding promotional arrangement with the race.
“When we pull up to the grid and there’s beautiful women on the grid, that’s the Monaco Grand Prix, that’s a lovely thing.”

Rival driver Vettel chimed in, contending the furore around grid girls was unnecessarily “blown up” and a symptom of the modern age.

“I agree with Lewis, I like women, I think they look beautiful,” said Vettel, adding he was “just not interested” by males occupying the role.
“Bottom line, I think it’s too much of a fuss nowadays,” the German continued. “I think all the women that took part as a grid girl in the past did it because they want to. I’m sure if you ask any grid girl on Sunday if they’re happy to stand there, their answer will be yes.
“I don’t think there’s anybody that forces them to do it. So, it speaks a little bit for our times that sometimes there’s a lot of noise for nothing.”
Grid girls arrive for the pit lane walk ahead of the Italian Formula One Grand Prix at the Autodromo Nazionale circuit in Monza on September 3, 2017.

The “grid kids” introduced this season — young karters elected by motorsport clubs or “lottery” — will still be present on the streets of Monte Carlo.
It’s also not the first race this season to feature a promotional presence — with both the Bahrain and China Grand Prix featuring air hostesses. 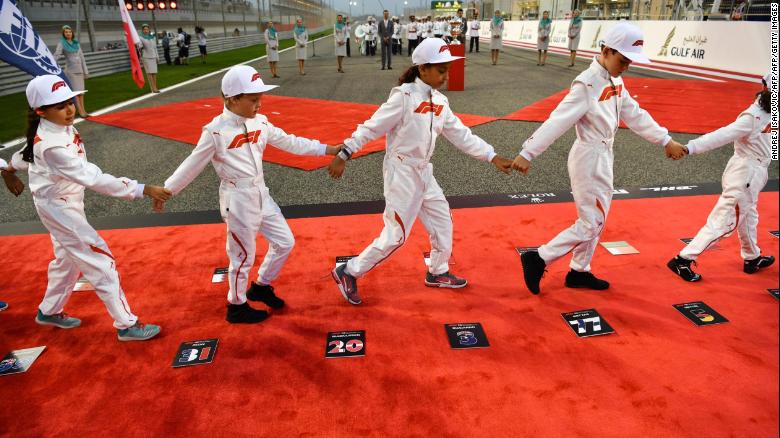 Children walk off the starting grid prior to the Bahrain Formula One Grand Prix on April 8, 2018.

But the news has nonetheless provoked outcry on social media.
“Very disappointing that F1 went back on a principle,” Tweeted @KarlaGeorge. “Retrograde step in my opinion.”
“The use of grid girls is a very obvious example of how our society objectifies, undervalues and undermines young women,” posted @Anthonyhett. “If true equality can ever be reached, these things need to stop.”
The issue has been divisive ever since Formula One announced the end of the practice earlier this year.
For 25-year-old Melissa James, a promotional model for eight years, becoming a Formula One “grid girl” was the pinnacle of her career.
“They say we need protection and that we’re so vulnerable — we’re not,” she told CNN Sport, protesting the eradication of her “dream job.”Another former “grid girl,” Rebecca Cooper, called the bans “political correctness gone mad.”
“If we don’t do something to stop this where will it end? No grid girls, no cheerleaders, female singers being told what to wear on stage, no models in magazines?!” she tweeted in January 2018. “I’ll fight for my right to choose what I wear, where I work and to keep a job I love.”

Hamilton conceded he’d never asked grid girls how they felt, but stressed his opposition to “pushing” women into the role.

“I’ve not really ever spoken to women about how they feel about the whole situation,” said the four-time world champion.
“I definitely don’t think that we should ever be supporting or pushing these women to feel uncomfortable. And if they are, then we shouldn’t do it.”
Haas driver Romain Grosjean said he thought the removal of grid girls had been “good thing for women in the 21st century, because they were not used as just a board holder.”
TAG Heuer did not immediately respond to CNN’s request for comment.
Source: CNN